I've said it before and I'll say it again, as far as wrestling memorabilia is concerned, right now it's a buyer's market. That isn't to say that all items are dead in the water as far as prices go, but many collectibles that went for high premiums just a few years ago can now easily be obtained for nominal prices.

In this edition of MarketWatch, we'll be taking a look at the latest going rates on collectibles that mark "firsts." Rookie cards, first figures, and more items that may surprise you.

*We'll begin with an item that's actually skyrocketed in price just recently: the 1982 Hulk Hogan Wrestling All-Stars card. While cards from all of the Wrestling All-Stars card series have usually commanded a few dollars more than other wrestling cards, the cards of Flair, Andre, and especially Hogan have began to sell for hundreds just this year. Each card in the set is considered to be the stars rookie card, yet the cards were only available in sets, so there should be a relatively even amount of each card available.

*With many of you knowing how near and dear Pro Wrestling Illustrated is to this writer's heart, 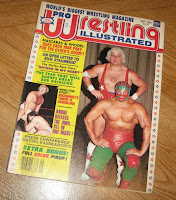 I'd be amiss to leave the first issue of PWI out of this article. Sadly, the issue no longer commands the $30-$50 price tag it once did. The Sept. 1979 issue can now be had for a mere $10-$15. The issue was greatly hurt by the replica edition that was published a few years back. The real deal, however, is still something that collectors should not be without. 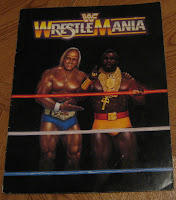 *Going from magazines to programs, the prices are still relatively low. The program from WrestleMania 1, featuring the incredible artwork of Hulk Hogan and Mr. T, has been selling from between $10 and $25. At certain times over the years the price for this particular publication has risen, but like the PWI, this is really something that all collectors should have for sheer historical purposes. Find the program along with the original press kit for the event and all bets are off. So few of the WrestleMania press kits have shown up that it's impossible to gauge the value/demand at this time.

*For the modern collectors out there, the first action figure of the Celtic Warrior has been quite the hot topic as of late. Debut figures are usually always sought after at the initial time of release. Due to the long delay from Sheamus' in-ring debut to the release of the figure, in addition to his meteoric rise to the top, this "fella" has garnered extra attention and hysteria. Selling for $30-$50 just a few weeks ago, the prices have dropped considerably in the past few days. With a total of three Sheamus figures now on the market, any one of them should be obtainable for under $20. Even the "chase" versions including a 1 of 1000 belt can be had for that price. In this case, it pays to wait!

*Wrapping it up, we'll look at another item that's been "hurt" by a reproduction. The 1990 first 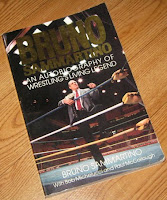 edition autobiography of Bruno Sammartino first published by Imagine Inc. has long been one of the most sought-after wrestling books. Last year, Sammartino had the rare book re-released with an additional update. Still, the first edition published by the same company responsible for the Wrestling Legends trading cards is the more collectible of the two. When it shows up, the first edition can now be had for around $20.

That wraps it up for the "firsts," but stay tuned for many long-awaited items to be highlighted here on the blog!
Posted by J\/\/ at 2:14 PM