And so it has come to this--wrestling memorabilia awards. Where better to award them than right here on the blog?

There was no polling or voting. The choices were made simply using my own humble opinion. You may agree or disagree, but that's why these awards aren't the Tonys, the Grammys, or even the Slammys. These awards are named after the person awarding them. No, the world is NOT ready for... 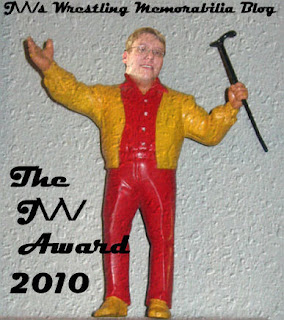 With both WWE and TNA having brand new action figure lines in 2010, the possibilities for both companies to have a "Best Figure" were nearly endless. The only argument I will completely shoot down in this category would be for the Mattel WWE Defining Moments Randy "Macho Man" Savage figure. The figure was not considered this year due to it not being available on a widespread basis as of press time. There's no doubt in my mind that it easily could take the award in 2011. A legend does claim the 2010 award, however...

Jakks Legends of the Ring Series 1 Sting wins "The Joshie" for 2010 Best Figure. For the 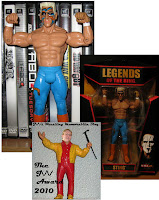 entire run of the Jakks WWE Classic Superstars line, fans clamored for a Sting figure. While the packaging is slightly different, this figure fits right in with any of the Classic Superstars figures filling a huge void in the lineup. "Surfer" Sting is well represented with great colors and a perfect neutral head sculpt. The award is a bittersweet reminder that as of now, the Legends of the Ring line is planned to only be integrated into the basic TNA figure line.

Again the two major companies benefited from having two great manufacturers on their team with Topps and Tristar for WWE and TNA respectively. Both companies had fantastic showings of product in 2010 and are already showing huge promise for 2011. 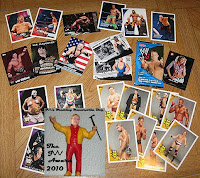 Topps WWE cards win "The Joshie" for 2010 Best Cards. While the middle of the Topps production year showed a trend towards kid-friendly collectibles, it is to be expected with the WWE's current PG-rated business model. Topps did a great job early in the year saturating stores with the remainder of their Topps 2009 set, while beginning this fall the company rolled out the Topps 2010 set. Filled with a great basic set including the first NXT group (now Nexus), handsome championship and nationality subsets, as well as great autograph and relic cards, the Topps WWE 2010 set is truly hard to beat.

The wrestling magazine market is smaller than it's ever been, but with both the WWE publishing several titles in-house as well as the omnipresent Weston magazines still on shelves, there are still enough publications to warrant an award.

Pro Wrestling Illustrated wins "The Joshie" for 2010 Best Magazine. I never claimed to be

completely unbiased, but PWI is truly still the best wrestling magazine out there. WWE's main publication is more of a PG-rated Maxim with reviews of items completely unrelated to "sports entertainment" and constant "reminders" of why today's product is better than anything else the industry has ever produced. Well, someone has to believe that...right? PWI not only continues the traditions that have made them number one since 1979, but also opens up to new trends in the business such as the very blog (and author) you're reading right now.

This award is for the best overall wrestling related product line put out this year. Literally any company that produced anything related to the industry is considered for this award. One company came immediately to mind for this award in 2010, and it's one that may surprise longtime readers.

Mattel wins "The Joshie" for 2010 Best Product Line. I have been very critical towards Mattel since their products first hit shelves in the last days of 2009. A huge media blitz and perhaps the biggest support WWE has ever shown towards one of their licensees did nothing to change my mind. A completely new type of figure has been produced by Mattel for WWE. Likenesses and the general appeal of the toys have been hit or miss. Promises of more new characters than repaints and re-releases have only been half fulfilled. That said, no company has shown more ambition for their line in 2010 than Mattel has. With a constant stream of new product and a renewed energy towards capturing the best of the WWE past and present, Mattel has come a long way and shows much promise heading into the new year. Mattel has gone from producing He-Man to Triple H. Hot Wheels to Hot Rod. Barbie's Pink Dreamhouse to The Dream's Purple Splotch. Let's see just how far they can go.

It takes a lot for a collectible to be dubbed "Holy Grail." Very rarely do they even come about unless it's on a personal level. A "Holy Grail" to me could mean absolutely nothing to the next guy. This award, while titled "Holy Grail," is more of my nomination for an item released this year that I believe will be very collectible in the future. 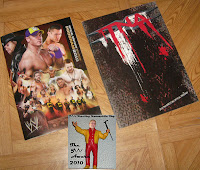 respective live events both promotions offer large event programs. The publications are more books than they are the traditional style program and most of the time simply feature large pictures of their rosters. In an era where so much tradition in the industry has fallen by the wayside, it's nice that there is still something to look forward to purchasing when you attend a live event. While the programs have been available through the websites of both companies at times, nothing beats picking one up at an event as a memento. Many fans use these as "autograph projects" to try and get each and every photo in the book signed. TNA helps in this pursuit by promising to have many of the stars at their live events sign any program purchased at the shows. Either way, these large, glossy keepsakes are something that fans will be trying to snap up years from now. Get them while you can!

That concludes The 2010 J\/\/ Awards. Agree? Disagree? Let us know via commenting or leave your opinions on our Facebook fanpage.

Thank you for reading and supporting the blog throughout 2010. 2011 will be even bigger yet. Happy New Year!

and a "Joshie" to you for a great job!