Happy New Year! Thank you for all the great support in 2010 and I hope that you are all entertained and enlightened by everything we'll have for you in 2011.

It seems that many of you are enjoying the memorabilia countdown of the WWE's list of "Top 50 Superstars of All Time" over on our Facebook page. It also seems that more and more of you have been inquiring about values of items. While it's hard to pinpoint exact prices for items, a keen eye on eBay can give a rough estimate.

That's where our "Wrestling MarketWatch" series of entries comes into play. A mixture of items, usually with a common theme, are highlighted based on their recent eBay performance. For the first MarketWatch of the new year, we'll start with collectibles based around the month of January.

*We'll start by going back a full 56 years! Lasting well into the 1980s, Wrestling World magazine 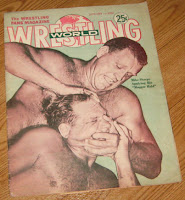 more often than not seemed to highlight great action photos on their covers. The January 1955 issue features a wrestler whose son became a cult figure in his own right. Mike Sharpe, father of '80s WWF favorite "Iron" Mike Sharpe, is featured in glorious black and white applying his "Mugger" hold. Inside such vintage stars as Buddy Rogers, Verne Gagne, Johnny Valentine, and June Byers are featured. This issue just sold for a whopping $69.00 at auction, proving that the cover need not always feature the biggest stars in order to be sought after.

year for many fans. With many collectibles derived from the event, I'm certain that this is not the last time you'll see the Rumble highlighted in this blog. Today we'll be focusing on recorded memories of the event itself. In 2007 the WWE released a complete anthology of the event from 1988 to 2007. Handsomely packaged in a sturdy white "clam shell" box, the DVDs are accompanied by four 5x7 numbered cards of Royal Rumble moments from over the years. It should be noted that the music rights issue which horribly plagued the WrestleMania DVD anthology is much less annoying with this set. It seems that the WWE figured out that they own the rights to many more themes than originally thought. The set, which originally retailed for as much as $200, recently sold for $112.50 at auction. Quite a buy for twenty full-length events! If you're simply looking for the 1992 Royal Rumble match itself, look no further than the just-released WWE Bobby "The Brain" Heenan DVD set. Due to the amazing commentating job by Heenan and Gorilla Monsoon, the match is included in all of its glory.

*Is $112.50 just not an amount you want to spend on something a mere four years old? How about twenty-two years old? A brand new and sealed vhs video of the 1989 Royal Rumble recently sold for the exact same price as the complete 88-02 anthology shown above. A sealed copy of the 1995 event sold for $36.00. While these prices were common for Coliseum Video versions of WWF pay-per-views a few years ago, examples now MUST be new and sealed for prices to reach these levels.

*And how is our old friend Sheamus doing? While both of his figures continue to become more

common on the shelves, one particular variant is still keeping numbers high. The second Sheamus was released in the Mattel Royal Rumble Heritage Series as was shown in our review. "Chase" versions, limited to 1,000 each, of all figures in this series come packaged with a Royal Rumble folding chair. While prices may drop for these figures as the "1 of 1,000" belt Mattel figures did, for now the Sheamus with the chair is selling for around $25 at auction. Fella!

As always, thank you for reading and let us know what you want to see here on the blog. You can either comment here or check us out at either of the links below.