The Hottest Wrestling Item of the Holiday Season...Fella!

It really isn't hyperbole. Sheamus truly is a hot figure nowadays. Certainly not as hot as some sellers (or scalpers) would've had you believe a few weeks ago, but very sought after nonetheless.

Why so hot? New character. Fast rise to the top. Huge delay in production. In the era of six month turnarounds between superstar debut and production of first figure, a Sheamus figure is long overdue. The rumor mill claimed a snafu in production regarding the Irish champions famous skin tone. Certainly a company as old as Mattel would have no problem in that department. Or did perhaps the years of churning out suntanned gods and goddesses such as He-Man and Barbie blind the company just a bit?

Regardless, store shelves are now seeing, albeit not for very long, figures of the Celtic Warrior himself. There are actually three figures of the "Jar of Mayonnaise with eyes" in total. The most desired is the figure released in both the "Basic" 7th series of Mattel WWE figures as well as the Royal Rumble Heritage series. Despite the slight difference in packaging, the figures themselves are identical. The third is in the gimmicky "Flex Force" line which is aimed more towards kids. The figures are less for posing and displaying and instead more for the "Flex Force" built-in action feature. The figures are only half covered in their cardboard packaging so that kids can check out the features in-store. The figure reviewed in this entry is the one featured in the Royal Rumble Heritage Series.

I can recall a time when most figures were "hot" at initial release. This was because for many of

the stars this was the one and only time their figures were available. Re-releases and repaints simply weren't a part of the sales model unless your name was Hulk Hogan. These days, most figure series are lucky to see one new character. This is why Sheamus sticks out on the store pegs among seas of Randy Orton and John Cena figures. Well...that and his skin tone.

Packaging is again your standard fare. Not downing anyone for it, as I think figures should have some continuity when it comes to packaging. I dare say that I may like the basic figure packaging just a bit more than the Mattel WWE Legends packaging which seems much too large for the figures. Mattel seems to have dropped their inclusion of stands/name cards for the figures which was a nice, but not necessary, touch. 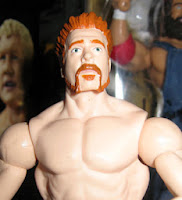 The scanning/sculpting on Sheamus is perfect. While I'm unsure if the torso is brand new to this figure, it certainly looks like Sheamus. The face and hair are dead on, with striking red hair and blue eyes capturing the former WWE Champion's intensity.

I still can't put my finger on it, but the joints on the figure continue to feel rather stiff and immobile. While this is good compared to some of the hit-or-miss joint issues on the Jakks figures, perhaps a child would be better off with a "Flex Force" figure to play with. For display, however, this figure is perfect especially noting the lack of mid-torso joint that I've continually expressed disapproval of in my reviews.

If you're collecting the current products, you're going to need a Sheamus. Although I predict he'll be an easy to find figure once Mattel includes him in more series, for now it's a good idea to grab one while you can.