As Christmas wraps up and the new year fast approaches, many begin to reflect on the year about to depart. For wrestling fans, years full of sadness due to the deaths of wrestling stars and heroes are all too common.

While the reasons for this will be debated time and time again, I'd like to briefly take the time to honor the grapplers and personalities in a completely controversy-free environment.

Several former NWA Champions left us this year, taking with them a great part of what made the "classic" years of the business so great. Jack Brisco, Gene Kiniski, and Edouard Carpentier were all honorable champions both in and out of the ring. Each were all integral parts of the rich history and lore of the business. 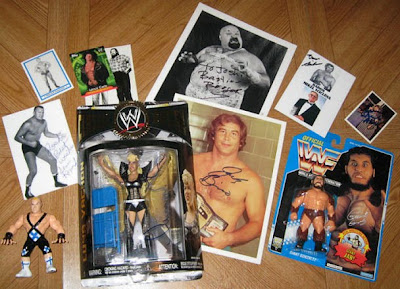 Classic characters such as Grizzly Smith, Baron Mikel Scicluna, and General Skandor Akbar were also among those who departed in 2010. While Smith (father of Jake Roberts, Rockin' Robin, and Sam Houston) and Akbar made great contributions to the industry both in the ring and behind the scenes, Scicluna spent the majority of his career making others look good. Although he was a title holder, Scicluna will be best remembered for making such stars as Bruno Sammartino and Gorilla Monsoon look all the better.

Tragically, there is always a number of stars each year that pass well before their time. Bastion Booger, Ludvig Borga, Lance Cade, Jorge Gonzalez, and the unforgettable Luna Vachon top that unfortunate list this year. We can continue to ask why, but in reality any death can be looked at in that manner. Rather, we should remember their success and the impact they individually made on us.

One other mention goes to the first lady of wrestling journalism herself, Georgiann Makropolous. Georgie, as she was known to friends and fans the world over, was part of the business for decades. Starting off writing in the wrestling magazines and founding the Bruno Sammartino Fan Club, Georgie carved a niche in the industry like no one else. Her passing is still a great shock to me nearly one year later.

If I left anyone out, I apologize. I'm going by memory as far as all who passed and no disrespect is intended.

May all of our fallen stars rest in peace. 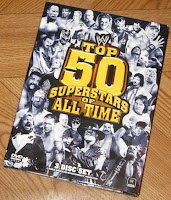 Among a blitz of DVD product released by the WWE this holiday season, one set has garnered a ton of attention. The 3-disc set entitled WWE Top 50 Superstars of All Time is a very controversial and political product for sure. Beyond the rankings and omissions lies a great collection of matches, many of which have never before been released on DVD. Putting any feelings or arguments on the rankings aside, I have created a special gallery on our Facebook fan page featuring the DVD set itself. Gradually, all 50 stars will be represented by an individual piece of memorabilia shown in the gallery in order. #50 is up now and will be joined by more in the near future. Check it out, become a fan of the blog, and enjoy!
Posted by J\/\/ at 1:15 AM