Certainly no wrestling fan would ever describe "Rowdy" Roddy Piper as underrated, but it's quite possible that his role in the history of the industry could be labeled as such.

Though many fans look fondly at "happy" Roddy from his later in-ring career, Piper's best years and moments could be pinpointed to the decade of the '80s. It was no accident that when Trivial Pursuit released their "Totally '80s" edition a few years ago Piper starred in the commercial with other icons of the decade like (former WWF foe) Cyndi Lauper and Charlotte "Mrs. Garrett" Rae.

Opening the decade in the great southern territories of Georgia and the Carolina's, Roddy Piper built his name with both verbal and physical battles. Jack Brisco, Don Muraco, and Greg Valentine are just three fellow legends who "paid the Piper" during this time period. Piper's 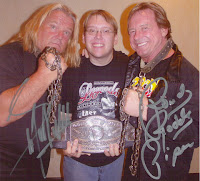 dog-collar battle at the inaugural Starrcade event with Valentine has become one of the most memorable matches of the era and is cited by many as a foreshadowing of what was to come with "hardcore" wrestling.

It wasn't until the "Rock 'n Wrestling" era began that Piper perhaps changed the industry. Although the WWF marketing machine and endless charisma of Hulk Hogan all but guaranteed success, it's difficult to imagine the same scenario developing without "Hot Rod."

During those years, many of Hogan's opponents simply did not have the gift of gab that Piper possessed. To be honest, MOST wrestlers didn't have the amount of talent that Piper did in that

area. How would the "Rock 'n Wrestling" era and 80's "boom period" have played out without Roddy? In this position, Piper was quite irreplaceable.

Although Piper's career never quite reached the same levels after his 1987 retirement, "Hot Rod" does hold the distinction of being one of the most successful wrestlers to journey into acting. Although his films were not always commercial successes, fans place many of his performances on the same pedestal of his wrestling greatness.

Nearly 25 years after his starring roles in "Body Slam" and "They Live" among other films, Roddy is back with a film entitled "Fancypants." The film, which recently premiered and is

slated to hit DVD shortly, should be another favorite among Piper's fans as the topic is none other than...pro wrestling.

Our friend Johngy, who runs a great blog entitled Johngy's Beat (frequently guest starring yours truly), recently had the opportunity to attend the premiere of "Fancypants" and was gracious enough to provide us with a review and photos.

"Last night we attended the Chicago premiere of Fancypants, the story of wrestler Leo the Blue Lion (portrayed by Patrick Gleason), who is being pushed out of the spotlight, but has one huge fan left in the form of 8 year old Tommy (portrayed by Jackson Dunn). At the heart of this story is the relationship between the two. 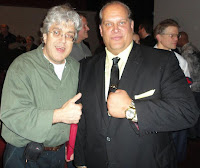 Making his film debut, Gleason was a natural as Leo. For his wrestling lessons, he trained with the Lucha Libre. In our interview with him, he compared learning about acting with learning about wrestling. Gleason said that both were challenges, but both were a lot of fun.

Also making his debut was Dunn, a local young talent who perfectly nailed the spirit of a die hard wrestling fan. Dunn seemed to be having a ball on the red carpet. He said he wasn't really a big fan of wrestling, but he enjoyed being around Roddy Piper.

Former American Gladiator Beth Horn (also a native Chicagoan), appeared as Animal Babe, one of Leo's opponents. Beth looked stunning and was all smiles as she walked the red carpet. She told us that her AG work and physical training was beneficial to her work as Animal Babe. We wrestled a scoop out of her. She is working on a future project, which she couldn't name, but she did drop the initials "OMG". Keep an eye out for that.

If Fancypants seems to have a Chicago flavor to it, it's because it was produced by Chicago's Humble Pie Films and was shot in Chicago using Chicago actors. Producer Daniel Hanson created Humble Pie Films with Writer-Director Joshua Russell (an instructor at DePaul University), Creative Director Jim Andre and Creative Producer Jim Poole. Russell talked to us about the process of completing an independent film and how he hoped Fancypants would open some doors for future indy films and for future projects utilizing Chicago and Chicago talent.

Fancypants is the story about wrestling, but it is really about the relationship between Leo and Tommy, the gifts they give each other and the growth we see in both. It is funny, serious, heartwarming, inspirational, but most of all very entertaining."

Thanks again to John Wroblewski for the great review and photos! Be sure to check out Johngy's Beat for a daily dose of entertainment, sports, celebrities, and more! For more on Fancypants, check out the official site at http://www.fancypantsmovie.com.

Muraco, Valentine, Hogan, and even cancer couldn't keep Roddy Piper down. He's a wrestler, actor, husband, father, and even a G.I. Joe. Don't question it, just embrace it: "Rowdy" Roddy Piper IS an icon. And don't forget...just when you think you have the answers, he changes the questions!
Posted by J\/\/ at 8:15 PM