The Top 5 Wrestlers...Who Never Had An Action Figure

For stars in all forms of entertainment, getting an action figure can mean different things. Some embrace the honor that it is, looking at it as "immortality in plastic." Others seem to make light of it or simply just don't care.

Nine times out of ten it seems that pro wrestlers really enjoy it. These days nearly every wrestler that makes it to WWE gets a figure, but what about twenty years or so ago? The Jakks WWE Classic Superstars line certainly helped more wrestlers of the past get figures that were otherwise overlooked. Who ever thought that grapplers such as Ron Bass or Rocky Johnson would finally get figures literally decades after their careers ended?

Although that amazing figure line helped "clean up" the unmade list, the fact of the matter is that there are still major wrestling names who have never had a plastic likeness made. I'm not talking about names like Frank Gotch, Strangler Lewis, or even Lou Thesz who came way before the action figure era. I'm talking about stars who made their names around the time that wrestling figures became commonplace on store shelves and in children's toy boxes.

This entry contains five wrestlers who need action figures desperately. I did use a couple of guidelines while making my list. The five names are strictly male whose greatest claim to fame were their in-ring years. Since most manufacturers concentrate on actual wrestlers, I have not included managers, commentators, or female stars. As much as I'd love figures of Sir Oliver Humperdink, JJ Dillon, The Glamour Girls, and Bob Caudle, companies like Hasbro, Galoob, and others just weren't interested in marketing more than male wrestlers. Even today, the companies struggle to make female and non-wrestler figures. Without further ado, here is my top five (in no particular order)... 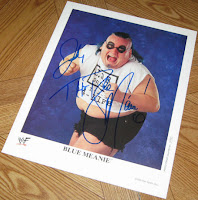 What wrestler ever looked more like an action figure than ECW's best dancer? Colorful, fun, and a favorite of fans everywhere, a figure of "Da Blue Guy" would've easily been a great seller. Although The Meanie's ECW career did not coincide with the release of the company's action figures, his various WWF/WWE stints or inclusion in the Classic Superstars line would've been an ideal opportunity for a Meanie figure. And don't even get me started on how great the figure would've looked autographed! 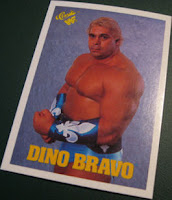 As far as the era of the LJN and Hasbro WWF action figure lines, NO ONE was more overlooked than "Canadian Strongman" Dino Bravo. A regular member of the roster during portions of both lines, Bravo just did not get an action figure. Fans have speculated that the violent nature of Bravo's death kept Jakks from including him in the Classic Superstars line. Word has been that his family is all for the production of a figure, so I hope that "Canada's Strongest Man" eventually gets his plastic due. 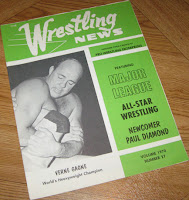 This is one that I'll never understand. The man owned his own wrestling company WITH an action figure deal and still did not receive a figure. Although it's possible that Remco thought that an action figure of a balding, middle aged man wouldn't sell, based upon some of the toy company's other ideas I don't buy this theory. I certainly wouldn't think that it was Gagne's ego, either, although that's another story for another time. Verne is another who was overlooked in the Classic Superstars line, but the figure wouldn't satisfy me the way that a Remco version would have. 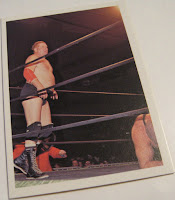 No folks, "Captain Redneck" didn't have an action figure. While he wasn't in any of the major companies for any great lengths of time during their initial action figure deals, we certainly should have seen him in the Classic Superstars line. He also would've been a great candidate for an action figure out of Japan where legends such as Mil Mascaras, Dory Funk Jr., and Antonio Inoki saw their inclusion from this list eliminated. 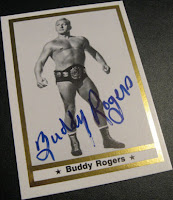 Including this "Nature Boy" was a decision that I went back and forth on. While his wrestling days were over for all intents and purposes by the era of figures, Rogers is one of the names that transcends eras. One could argue that Thesz should be included if Rogers is, but Rogers had the larger than life "sports entertainment" value that should have made him one of the very first Classic Superstars figures. Gorgeous George also falls under this umbrella but is disqualified due to the existence of a very rare puppet/doll of "The Toast of the Coast." Rogers had no figural representation whatsoever.

There you have my own personal top five. Before you ask, Magnum T.A., Kevin Von Erich, and Terry Taylor all have figures either released or slated to be released in the near future thus eliminating all three of those worthy contenders. Did I forget someone? Maybe you're unaware that a certain wrestler made it to plastic? Let us know here or on the Facebook Fanpage!
Posted by J\/\/ at 9:17 PM

Excellent list. Did Iceman Parsons, Chris Adams and Angel of Death ever have figures?
My all time want would be Woman, but that will never happen.

None of the above had one unfortunately! :-(

We need a Ronnie Garvin figure!

You know...I can't believe I forgot Ronnie. He should definitely be on this list.