With the financial state that pretty much the entire world is in, it should be amazing to anyone that many collectibles are still selling for the prices that they do. While I'll still argue that it's a buyers market as far as wrestling memorabilia is concerned, many items are still getting well over $50 in the secondary market.

In this installment of our recurring "Wrestling MarketWatch" series, I'll take a look at some of the recent selling prices on various items that have went above and beyond what many would think their value might be. As always, I caution that "value" is simply what someone is willing to pay for an item at a specific time. Should you go to sell the exact same item you may not get nearly the same price. It's all about supply, demand, and advertising/describing the item properly.

*We'll start with a perennial favorite among both wrestling collectors and children of the early '90s who've grown up and want their toys back. The Tonka WWF Wrestling Buddies have stood the test of time in terms and popularity...and durability. While these toys do fetch high prices there are also a ton of them out there. That can only bring one conclusion: fans simply like these things! What's not to like? Fun cartoonish caricatures of your favorite early '90s WWF stars that are sized and made to be WRESTLED with. While prices vary depending on which wrestler it is, the very popular Ultimate Warrior buddy has recently been selling for around $50 out of the box. If you've got the box, the Warrior and other stars can soar to $100 and beyond.

*Back to the year 1966 and cartoon characters of a different kind. While Bruno Sammartino ruled the northeast, he obviously couldn't be the sole hero of the area with the evil threats of Killer Kowalski, Gorilla Monsoon, and other villains of the mat. In Pittsburgh, the champ had

help and an ally in the form of The Battman. No, not Batman. The Battman. Yeah. Trademarks you know. Well, the original outfit (and sidekick) would've never stood up in court these days, but nonetheless the Pittsburgh area had its own wrestling Dynamic Duo. Veteran wrestler Tony Marino virtually had a second career portraying the ring's version of the Caped Crusader. To this day, the 80-year-old Marino wears Bat Signal-shaped hair on the back of his head. Back in '66, the character made the cover of the October issue of Wrestling Revue magazine. Although certain covers of the now-defunct magazine have always sold well, this particular copy of the magazine recently sold for an amazing $202! Holy Rasslin' Relics!

*Although they didn't have quite the marketing machine of the WWF at the time, Jim Crockett Promotions produced a nice selection of merchandise that has become much sought after in recent years. The last major merchandising venture that Crockett would embark upon before being bought out by Ted Turner was a partnership with Wonderama International. The 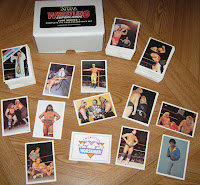 company ended up producing a set of NWA Wrestling Supercards. Featuring The Four Horsemen, Dusty Rhodes, Sting, The Road Warriors and hordes of others, the set is massive (around 350 cards) and, due in part to the offbeat nature of some of the photos used on the cards, a load of fun to collect. Since the set is indeed so massive, the easiest way to obtain one is by purchasing a complete set. These sets often include original cardboard boxes designed for the cards. Recently a set with box sold for $65. Although that isn't quite pocket change these days, I still advise collectors to pick this set up when they see it.

*I've discussed the WWWF Wrestling Action magazine quite a few times. It's a five issue set that just happens to be the first publication sanctioned by the WWWF. Prices have never been stable on these ranging from $10 to well over $100 for each issue depending on when you decide to 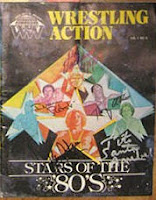 buy. All five issues, as described here, have amazing covers chronicling the late '70s WWWF. The last issue, which is actually under the WWF banner, recently sold for $53. This and other recent prices for the magazines indicate to me that demand is on the rise again. While each issue shows up on occasion by no means are they common.

*Finally we come to a favorite of so many collectors: the LJN WWF figure line. Like with so many collectibles, packaging can often be the key to value. The LJN tag team figures greatly resemble this remark. Although the tag team sets show up somewhat frequently and usually obtain several hundred dollars

each, the tag team figures packaged on cards and sold separately are a whole different story. The Killer Bees, Hart Foundation, and Strike Force individually carded would be a treasure to anyone but The British Bulldogs have become the most fabled of them all. The figures are even backed on Hulk Hogan card backs as opposed to having "clip and save" file cards of Davey Boy Smith and Dynamite Kid. Examples of each were recently sold at auction for $1,700 (Davey) and $1,009 (Dynamite) respectively marking the highest known prices for individually sold wrestling figures in recent memory.

What kind of treasures do you have stashed away? Would they carry the monetary bite of the Bulldogs or the ultimate popularity of Wrestling Buddies? As I always remind everyone, the true value is how much it's worth to you as an item. You can't go wrong investing in what YOU like. Holy Final Thought! 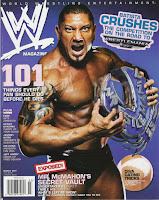 Although the pages of a four-year-old magazine probably aren't quite yellowed, I could think of no better "Musty, Yellowed Pages" segment to tie in with the recent selling price of the LJN Dynamite Kid.

In '07 the publishers of WWE Magazine decided to use a few photos of some of my items. I decided to highlight the Dynamite Kid LJN figure, as even toy magazine price guides were listing astronomical values for the figure and I 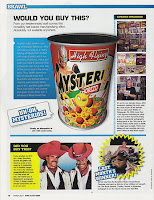 myself had seen less than five examples of the piece. Despite TWO fact checking calls from the magazine, they still misquoted me by proclaiming the figure to be a "rare one-of-five" figure. I had told the magazine

on three occasions that I had only ever SEEN around five or less in my collecting years. To this day I have still only seen around eight floating around, although I'd guess that a few more do exist.

Regardless of their mistake, I was still honored to be in the magazine. Now I'm writing about them. Coming full circle? Maybe.
Posted by J\/\/ at 7:21 PM