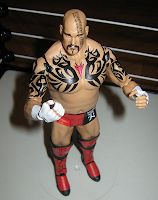 Countless wrestling action figures have been produced over the years commemorating a particular character, match, or moment.  While the figure that we're about to take a look at really wasn't produced to commemorate anything, it certainly makes me fondly remember a push that almost was, but thanks to various factors never really got off the ground.  On the night after WrestleMania XXVIII, a character debuted that was allegedly slated to be the big new villain of the WWE.  He certainly had the look and the talent, but sadly it was just not meant to be. 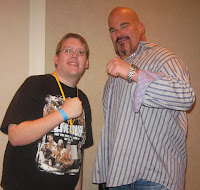 I've been a fan of the in-ring characters of Matt Bloom since he debuted in the
WWF as Prince Albert.  To me, he simply has the look of a wrestler.  While his earlier characters of Albert and A-Train weren't quite "main event" level, he always entertained me in the ring and seemed to carve out a comfortable niche among the WWF/WWE roster.  Following his first stint in the company, Bloom went to New Japan Pro Wrestling and became Giant Bernard, a reference to another American who became a star in Japan, Brute Bernard. 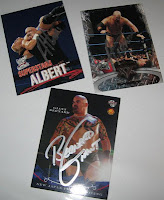 Giant Bernard collected several titles in Japan and definitely honed his craft while doing so.  He even reminded some of a young Big Van Vader.  Personally, I felt that he would be a perfect fit in TNA, but his appearances there were limited to being on the NJPW side of TNA's Global Impact shows in Japan.  When it became apparent that Bloom may follow the likes of Stan Hansen with a bigger career in Japan than here in the United States, rumors of a WWE return began to swirl.

A new WWE contract was confirmed when Lord Tensai made his aforementioned 2012 debut.  The character was basically a mixture of his Giant Bernard look dressed in traditional Japanese apparel.  Some compared him to '80s star P.Y. Chu-Hi (southern wrestler Phil Hickerson in an Asian gimmick), but others, such as myself, truly enjoyed the character.  A win over John Cena seemed to cement the scuttlebutt that Tensai would indeed become a top heel within the WWE. 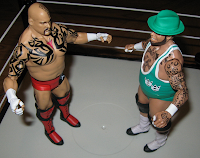 The WWE would allude that Tensai had been in the company before, but never went out of their way to advertise it.  Show attendees who felt that they needed to look "smart" in front of the rest of the crowd began to chant "Albert."  This, coupled with the re-signing of Brock Lesnar, became an obvious detriment to the chances of Tensai becoming a top star.  The character began to flounder and now has seemingly fell to a fate that one of Bloom's previous incarnations similarly suffered.  Tensai has become "Sweet T," the tag and dancing partner of Brodus Clay just as Prince Albert became the "Hip-Hop Hippo" with Scotty 2 Hottie a decade earlier.

As long as the man is making good money, we really can't be sour about the deal.  Still, for someone as obviously interested in becoming great at what he does, it seems a shame that he will be remembered in the United States for dancing to the ring.  True fans of his can overlook that and watch the big man in his New Japan matches.  Thankfully, Mattel is giving us at least two reasons to remember Lord Tensai.  The first of these figures is what we're looking at today. 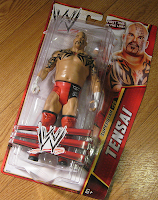 A "First Time In The Line" entry in Mattel's "basic" WWE figure line, I almost passed on this figure in the stores.  The reason is because an "Elite" version of Tensai, with complete entrance gear from the start of the gimmick, is going to be released shortly.  Upon seeing this figure for the first time, I knew that I had to grab it just as it grabbed my attention from the shelves.

To begin with, this figure is absolutely huge.  One of my favorite memories of wrestling toys of the past is the old adage attached to the LJN King Kong Bundy figure: you really got your money's worth!  Even at the average current price tag of $13 for these basic figures, this guy is huge.  Not only is there a lot of plastic here, but some great paint apps and detail as well.

Tensai towers over many figures as he rightly should, but is still shorter than The Big Show.  I must stop here to give credit where it is due.  Mattel has done a fantastic job of keeping scale in check with their WWE figure line.  While not perfect, most of the product that I have picked up has been fantastic in this regard.  That being said, I have yet to purchase a Rey Mysterio figure in the line.  The Mysterio figures have always appeared a bit too small and bland, but the newest one that is also in this series with Tensai is somewhat appealing.

It looks to me as if all new parts have been produced for Tensai.  The most striking of these parts is the barrel chest.  It almost sticks out at you through the plastic bubble.  The legs could also be new, but if they are not they definitely work well here.  The face scan is excellent as well, although Jakks Albert and A-Train facial likenesses were always good as well.  With distinctive features like Tensai has, it would be hard to screw it up.  The piercings are in place as are the kanji across part of his face. 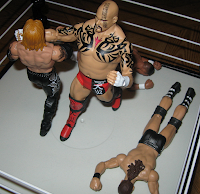 The tattoos as well as the design on the tights and boots are just amazing for a basic Mattel figure where such detail is often overlooked.  Even tattoos on the back of his head and legs are present.  For $13 we should be getting such detail, but in a situation where that isn't always the case it's a welcome surprise.  Considering that twenty years ago we weren't getting nearly the detail that we see now, I don't think that there is any room to complain on this level.

Articulation is more limited than the elite version will be, but it's still nothing to be disappointed about.  I feel that the elite figures often have too much articulation (see my constant torso-joint rants), especially when we're looking at a "big man" wrestler such as Tensai.  I have a feeling that, as long as it's compatible, I'd be one to use the Tensai gear on the basic figure.  We shall see when the elite figure is released.

If you're a fan of the basic figures, this is one that you absolutely can't pass up.  It's easily the most detailed and striking figure that Mattel has done for their basic line.  If you can wait, the full entrance gear makes the elite a worthwhile buy in a series that will also contain Damien Sandow in his robe.  This basic Tensai figure was in a series that also included the first figure of Sandow, but aside from the pink tights that figure appears as basic as basic gets.

I'm assuming that these will be the only two figures of Tensai, but that's really all you need.  I'm sure that we will all be treated to a Brodus Clay-Sweet T two-pack down the line.  Seeing as that I own most of the previous Matt Bloom figures (including the Hip-Hop Hippo), I'm sure that I will feel inclined to buy it.  That said, I'm almost positive that I won't enjoy it as much as the Lord.  Long Live Tensai!
Posted by J\/\/ at 7:00 PM