The Notorious A.J. Lee Returns To The Blog!

WWE's resident Diva nutjob and I have a past.  It could be that our now-legendary encounter is actually what first brought you to this blog.  In October of 2012, I had a meeting with Miss Lee that left me rather unhappy.  In a part-tongue-in-cheek and part-serious blog entry, I told the story of the meeting complete with photos.  A.J. has since redeemed herself to me in a completely unintended way.  That particular blog entry was the most viewed of the entire year of 2012 and garnered an immense amount of web traffic.  Any blogger will tell you that there isn't much sweeter than that. 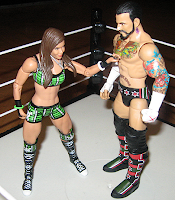 A.J. has obviously provided a lot of viewers for WWE as well.  To the average viewer, Miss Lee represents a crazy, nerdy, "cool" chick with a few loose screws.  To many seasoned wrestling fans, she's the first female character to be blatantly portrayed as a "ring rat" or "groupie."  In the "PG era" of WWE, it's an interesting concept and perhaps one that wouldn't have been portrayed as well in a more risque product.   Whether or not Miss Lee performs the character so well from personal experience, I will leave for you to decide. 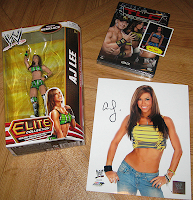 Seeing as that the character is so popular, it's no surprise that she's been getting a ton of merchandise.  For a month or so in the summer of 2012, it seemed that every WWE program revolved around the fickle, skipping Diva.  Even WWE's rather disappointing 1,000th episode of Raw had a big dose of A.J.  The show involved Lee in not one but two of WWE's most rehashed angles: a wedding and the appointment of a new figurehead.

A year later and not only is A.J. once again embroiled in top WWE storylines, but she has now had three Mattel figures officially released.  The standout of the three is actually just the third female to be included in Mattel's Elite figure line.  Following Kelly Kelly and Miss Elizabeth, respectively, A.J. joins the line of higher priced and, usually, higher detailed figures.  Again, due to her popularity, it's easy to understand why A.J. was chosen for this line.  But how does the figure measure up? 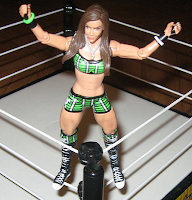 A problem that I've had with some of Mattel's releases creeps up once again here.  A.J. simply looks tiny in the Elite packaging.  Sure, she is tiny in real life, but at least the previous two females had costumes and/or accessories to fill the void.  Instead of re-releasing the very nice figure sized version of the Diva's championship that was included with Kelly Kelly, A.J. is accompanied by...her necklace.  The packaging actually proudly proclaims that she "Includes Necklace," as if it's a huge deal.  Well, it isn't and it's barely noticeable at that. 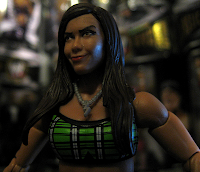 My other problem with the figure is that my particular A.J. came with a dirty face.  The dirt was actually splatter from the paint job when it was applied.  Recently, I have seen complaints about sloppy paint jobs with Mattel WWE figures, but this is the first time that I've personally encountered it.  While it's not too difficult to remove, a collector that's planning on keeping the figure packaged won't be too happy about it.  It's also an inexcusable mistake for a figure at an average price point of about $17.

As with all of the elite figures, A.J. has extra points of articulation that enable a variety of poses.  For limber characters like the Divas, this is welcome here and definitely works to the figure's advantage.  A.J.'s facial likeness is pretty spot-on, but not 100% perfect.  I can't put my finger on it, but there's something that didn't come across in the translation from Diva to figure.

The body design is actually what scores countless points for this figure.  A.J. has very distinct abs that are constantly being shown off thanks to her two-piece outfits.  To my knowledge, this is only the second female body design that has yet been done by Mattel.  Even the Miss Elizabeth figure used the standard Diva body.  With the very slender and slight body of A.J., I guess Mattel figured that there was no way that the standard sculpt could be used this time.  It seems as if the basic versions of A.J. also utilize this new mold. 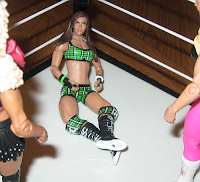 Although they share a body sculpt, the basic versions do not come close to matching the paint design of this Elite figure.  While the former have A.J. clad in very basic colors, the Elite includes a striking green, black, and white design complete with "emo" looking skull and crossbones.  In addition to the necklace, A.J. has a bracelet on each wrist.  Nice details such as these are important to the aura of a figure, but that "Includes Necklace" notation on the package still annoys me.

This is a "grab it or you'll miss it" figure partially due to A.J.'s popularity and also due to Mattel's never-ending crusade to "short pack" females and other popular figures.  This 21st Elite series also includes the first Mattel figure of the Honky Tonk Man and the first Elite figure of Ryback.  All will be popular, but A.J. probably falls somewhere in the middle in terms of longevity.  Ryback figures will be clogging the shelves in the coming months, but there's no guarantee that Mattel will produce another Honky.  A.J. has three figures already, but still falls into the female bias mentioned above.

The Elite A.J. is well done and easily the best representation of the character in figure form yet.  It's not one that necessarily makes you feel that you've gotten your money's worth, but that is often overlooked by many when a popular character is concerned.  A Diva's championship belt accessory would've been welcome, but Mattel obviously knew that they wouldn't need such an addition in order to sell the figure.

So the nutjob returned to the blog after all.  Hopefully she causes just as much of a ruckus as she did the last time that I graced her with a write-up.  Light it up!
Posted by J\/\/ at 7:00 PM