The Fallout Of Fanfest 2013

Just when we all thought that it couldn't be done, Greg Price and his staff did it again.  Fanfest 2013, this past weekend in Charlotte, NC, was one of the best wrestling events that I've ever attended.  Needless to say, that covers a lot of ground.  As a collector I love the autographs and photos, but Fanfest is so much more than that.  Celebrating wrestling the way we all wish it still was, meeting new people, renewing old friendships, and just simply having a blast.  That's what Fanfest is all about, and I hope that my words here can even somewhat properly convey those feelings.

As has become tradition, Fanfest began with two Q&A sessions on Thursday evening.  The first was a celebration of the infamous Starrcade '85 "I Quit" cage match between Magnum T.A. and Tully Blanchard.  For over three hours, the two legendary NWA stars took any and all questions regarding their long running feud, the business at the time, and even how their lives intertwined beyond the ring.  Any fan of the classic Jim Crockett Promotions wrestling product will want to go out of their way to see this.  The second Q&A was yet another hilarious couple of hours with Jim Cornette.  Always controversial and uncensored, Cornette debuted a new, slimmer look in what is said to be his only wrestling-related appearance of 2013. 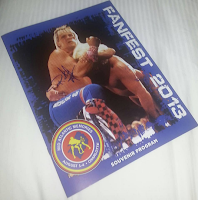 Friday kicked off the new addition of a wrestling training camp for up-and-coming stars of the business.  Dr. Tom Prichard along with Les Thatcher, Leilani Kai, Tully Blanchard, and Gerald Brisco instilled their knowledge to a number of hopefuls while fans were invited to view training matches.  Autograph and photo op sessions took place throughout the day and the vendor room was absolutely buzzing.  In recent years, vendor rooms at conventions have been notoriously disappointing.  Table after table of new DVDs, new action figures, and overpriced pre-signed photos have become the norm, much to the chagrin of serious collectors.  The vendor room at Fanfest 2013 was decidedly different.  Deals on great items were to be had throughout the weekend. 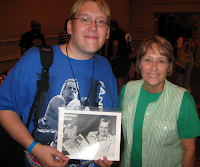 My two favorite tables had me stopping to chat as much as I did to shop.  New to Fanfest this year was the booth run by Pam and Robert Allyn.  You may not recognize the names, but you definitely saw them at the 2008 WWE Hall of Fame as well as WrestleMania 24.  They are the daughter and son-in-law of the late Gordon Solie.  The Allyn's are two of the nicest people that you will ever meet.  They greatly miss the late "Dean of Wrestling Broadcasters" and have much respect for the business that he thrived in for so long.  Pam and Robert had a huge number of items from Gordon's personal collection for sale at extremely reasonable prices.  They explained to me that they want the items to go to collectors that will cherish them.  With the amazingly fair pricing, I was able to add several of these treasures to my own collection.  One of these items was an authentically signed picture of the legendary wrestling broadcaster.  Pam and Robert made sure that I did not leave Fanfest without this, and I cannot thank them enough.  I'm hoping that they return to Fanfest 2014 just so that I can talk with them more! 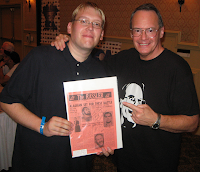 My other favorite table is one that I always seem to leave a bit poorer albeit with a huge smile on my face.  Ever since Jim Cornette decided to downsize his own collection a few years ago, my stash has become all the better.  The Cornette's Collectibles booth was on my agenda before I even arrived at Fanfest.  This was so that I could pick up his latest book, "Rags, Paper, And Pins."  The book, co-authored with Memphis wrestling historian Mark James, is a beautifully published volume covering the merchandising of that famous territory.  Since the book will be front and center here on the blog in a few weeks, highlighted in this entry is another item from Cornette's Collectibles.  For sale was a 1962 issue of "The Rassler" program from Texas signed by the legendary Lou Thesz.  Thesz signed the program in 1978 and inscribed it to the winner of a W.F.I.A. (Wrestling Fans International Association) raffle.  Just who was the winner of that raffle?  Jim Cornette.  How could any collector pass that one up? 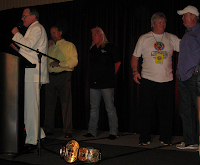 Friday night witnessed yet another grand Hall of Heroes banquet and ceremony.  My group was honored to have 2013 Hall of Heroes inductee Magnum T.A. at our table.  The NWA legend was gracious enough to answer and discuss any questions we had, including info regarding his unproduced Mattel action figure.  It doesn't take much to correctly guess just who asked about that!  Also honored were Les Thatcher, Danny Miller, Lars Anderson, and both The Rock & Roll Express and the Midnight Express with Jim Cornette.  It was touching to see the always boisterous Cornette choke up a bit at the honor.  In addition, it was comforting to see "Beautiful" Bobby Eaton happy and smiling the entire weekend in light of recent health issues. 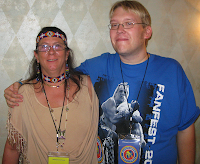 Saturday saw more autographs, photos, and elbow rubbing with the stars, including some unannounced surprises.  Former WWWF Women's Tag Team Champion Princess Victoria came to Fanfest with her friend, featured guest Susan Green.  I keep in contact with both ladies, but had yet to meet Victoria in person.  I was glad to learn that the Native American Princess whose career was cut short by a neck injury is just as fun and amazing as she had been in all of our correspondence.  I was also able to acquire one of Miss Green's vintage original ring vests.  It is one beautiful item that I unveiled on our Twitter feed shortly after I picked it up 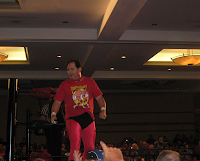 Saturday night featured a card of wrestling matches that were absolutely the best yet to be presented at Fanfest.  The match of the night may have been perennial Alabama Junior Heavyweight Champion "Action" Mike Jackson pitted against Bobby Fulton of "The Fantastics."  A highlight for many of us in the audience was Fulton's young sons taunting the crowd and doing it better than many talent that we see on tv week in and week out.  I should mention that the boys were probably between 11 and 13.  Possibly a new generation of "Fantastics" for the future?  Fulton and his sons performing "The Fargo Strut" at the end of the match was a particularly cool moment.

The main event of the evening was D'Lo Brown and D.O.C. (Festus/Luke Gallows) in a tag team match against The Rock & Roll Express.  With Tommy Young refereeing and "Rock n' Roll Is King" blaring over the sound system, 1985 had suddenly returned in the ballroom of the Charlotte University Place Hilton.  Ricky and Robert took the victory in a hard fought battle which proved that even after thirty years, rock and roll is indeed king.  The team was not shy in sharing that they had the time of their lives over Fanfest weekend, and it showed in every interaction with the fans.

Sunday wrapped things up with more signings, photos, and another trip around the vendor room for some great last minute deals.  Fans that were able to stay for the afternoon were even treated to a second live wrestling card.  Due to a very, very long ride home, it is always best for us to begin the long trek right after the final signing.  Although it was difficult to leave beautiful North Carolina, is was nice to be able to settle back and take in all of the autographs, photos, and memories once again collected at Fanfest.  It's amazing to think that all of that could be accomplished in what now feels like the blink of an eye. 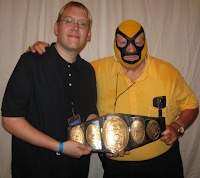 Thanks to Greg Price and his crew, the 2013 edition was the smoothest run Fanfest yet.  If there were any issues, the average fan was completely oblivious to it.  Word has been around for awhile now that the 2014 Fanfest will be the last.  Does that mean that it's the last "Mid-Atlantic Fanfest?"  Does that mean that the event will be moving locations?  Perhaps it is indeed the final one altogether.  Time will tell.  What I do know is that following this weekend, I'm going to have a very hard time even considering skipping the 2014 edition.  If we could only freeze time next July 31-August 3, Fanfest could go on forever...
Posted by J\/\/ at 7:00 PM

Great article. I have been considering going to the 2014 Fan Fest myself. I think you just made up my mind for me. Only question I have now is: How much money should I have on hand for all the great collectibles?

I think the safest answer is, "as much as you can." You never know just what a vendor is going to show up with. I'd recommend a few hundred minimum.