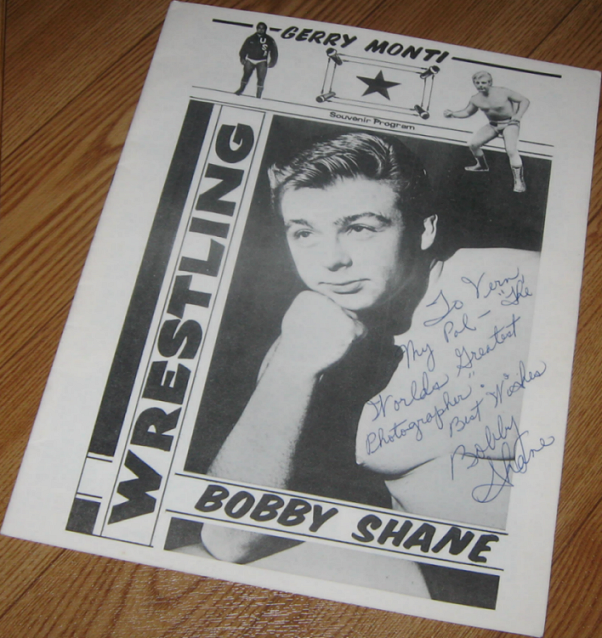 From this point forward, nearly every wrestler who has even a fleeting brush with success will have their career highly documented.  Their matches, even at an indy level, will be recorded by someone and kept whether the wrestler has a career of two months or twenty years.  Forty years ago, that was not the case at all.  Unless your matches were filmed at the arena or you wrestled in an area that miraculously didn't tape over or destroy their tapes, your work could largely be lost to history.  Such is the case of Bobby Shane. 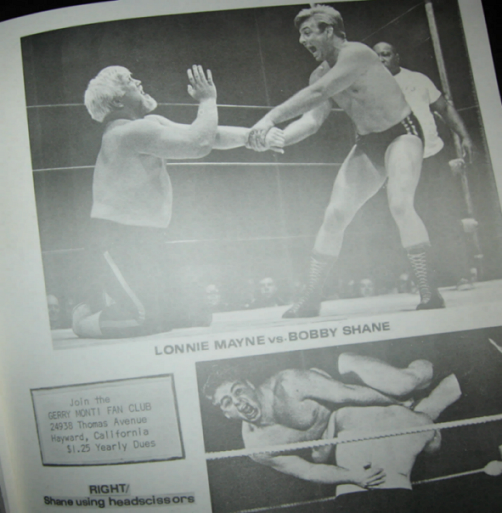 Thankfully, wrestling has quite the number of followers who enjoy documenting history.  Many undercard or journeyman wrestlers would be completely forgotten without these folks.  It wasn't that their in-ring work was sub-par, it was just that due to their positioning on the card, these wrestlers didn't get the press and fame that the larger stars did.  Bobby Shane is a relatively unknown name to fans my age and younger, but not for these reasons.  Instead, Shane was struck down just as his career began to rise.

There are many great biographies of Shane available on the net by those who've studied him.  My intentions are to instead familiarize those who, like myself, knew the name from two particular instances that are often retold, as well as various magazine covers and stories.  Like so many of us, Shane grew up as a fan of pro wrestling.  He got his foot in the door of the business like others in that era, doing odd jobs for the local wrestling promotion, St. Louis in his case. Shane fulfilled his dream of becoming a pro wrestler, and wrestled through much of the 1960's as "Wonder Boy" Bobby Shane.  Accounts say that Shane was a popular babyface, but much of the reverence for the young grappler comes from his run as "The King of Wrestling" that he adopted in roughly the last five or so years of his career.  Sadly, there is little footage of Shane remaining.  Although a clip of the end of a match pitting Shane against Jack Brisco is currently available and old discussions seem to indicate that a bit more exist, Shane is mostly lost to time. 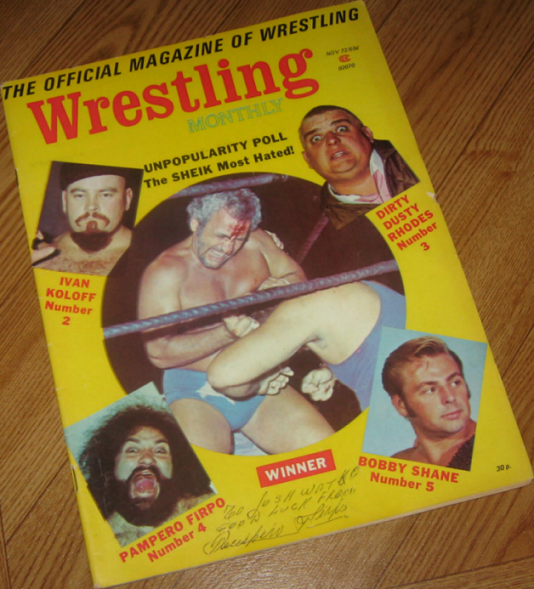 Still, an interested fan that does research on Shane will see a wrestler that could probably even fit into the scene today, were he born twenty years ago.  His charisma comes through with the many still photos of him, especially in his "King of Wrestling" stint.  A 1972 issue of Wrestling Monthly proclaims Shane to be one of the top five most hated wrestlers, along with the likes of Dusty Rhodes, Ivan Koloff, The Sheik, and Pampero Firpo.  That's quite the "evil" company right there.  His promos were said to be very good and had the tone of a spoiled brat always wanting to get his own way.  One can only wonder if he'd have eventually became another great manager in the era of Bobby Heenan, Jim Cornette, and Jimmy Hart.  He was also said to have had a great mind for the creative end of the business, and began to work in that capacity at the time of his death. 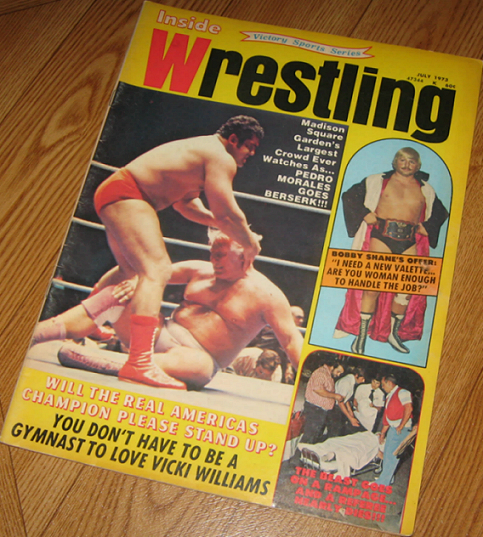 The two tales that you may remember regarding Shane are from the end of his life.  A young wrestler named Jerry Lawler approached Shane to inquire about how he could obtain similar "King" attire.  Shane provided Lawler with the name of the company that he ordered his garb from.  Since Shane was shortly thereafter going on a tour of Australia where he would not be using the gimmick, he lent Lawler his crown. Shane returned from that trip and began wrestling in Florida, but never did retrieve the crown from Lawler. On a February night in 1975, Shane boarded a small plane piloted by top wrestler Buddy Colt.  Gary Hart and Mike McCord, later to be known as Austin Idol, were also aboard.  Bad conditions contributed to the plane never reaching its intended destination.  Although Colt, Hart, and McCord suffered horrible injuries, Shane did not survive.  He was 29 years old. 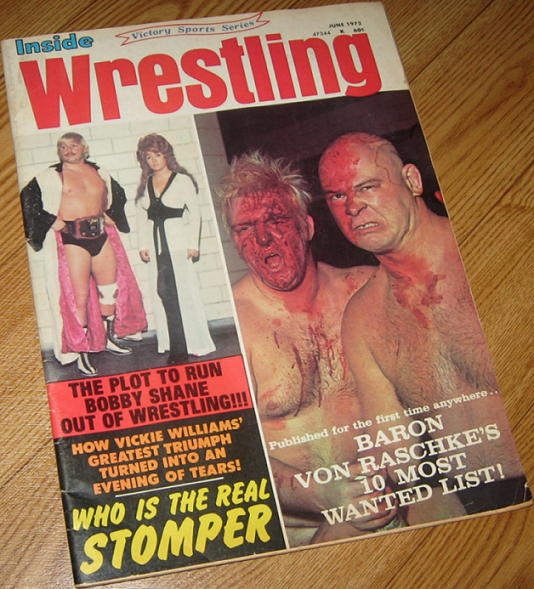 While he'll never have an action figure or appear in a video game, Shane memorabilia does exist.   He and fellow wrestler Gerry Monti had a fan club sometime in the '60s which featured some well-produced publications.  An exotic-looking color post card is another Shane item that features probably his most often seen pre-King image.  It was that "royal" look that saw Shane appear on many magazine covers, often with his valet and then-wife Miss Sherri.  The mustache and colorful attire that he wore may date the images, but actually shows Shane in an "old school cool" air that keeps him timeless. 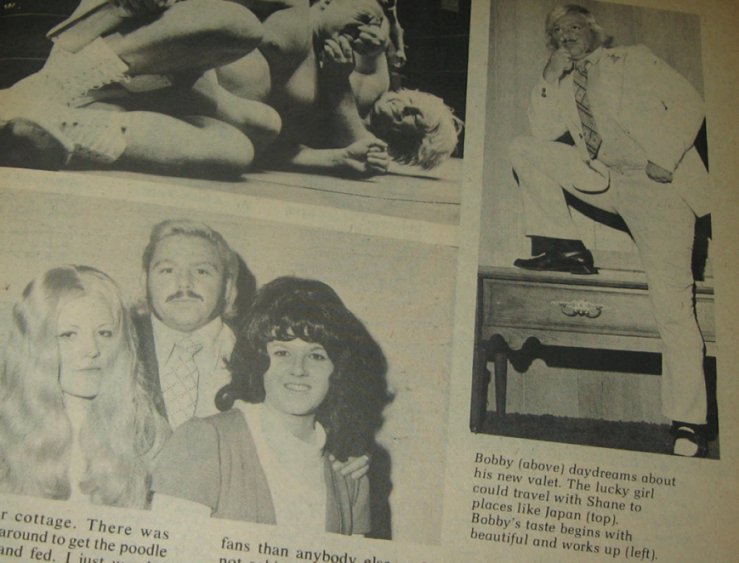 It isn't likely that WWE is going to teach their universe about Bobby Shane any time soon. It's up to fans who truly want to learn about the lost past of the business.  Men and women who have every right to be remembered just as well as the names that are, but who are forgotten for whatever reason.  They're unsung heroes who, had life played just a bit differently, might be looking back fondly on the fruits of their labor today.  By learning and remembering, we can help make up for it.
Posted by J\/\/ at 7:00 PM