A SummerSlam Of New WWE Product From Mattel

For the past few years it's seemed as if there are two times of the year when you are guaranteed to see Mattel WWE product stuffing the shelves--WrestleMania season and Christmas time. With the recent rumors that WWE is wishing to transform SummerSlam into a "second WrestleMania" as far as hype, scope, and marquee matches, it's more than likely that merchandise will follow suit. Already, SummerSlam 2015 has been bumped up to a four-hour time slot. Does the recent surge in new product and retail store space reflect this? 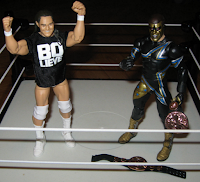 Since July, most Target stores have devoted an endcap to the line. The centerpieces have been the exclusive Four Horsemen set as well as the "classic" blue barred steel cage accessory. Basic and Elite figures as well as entries from the newer "Create A WWE Superstar" line have also been featured. Wal Mart stores have received giant blue cardboard displays for Basic, Elite, and Battle Pack figures. Newer series seem to be shipped with the display, but older figures that have been peg-warming for Wal Mart are frequently mixed in. These cardboard displays are far from collector friendly, often smashing the product inside. While no special displays have been rolled out, Toys "R" Us has also seen an influx of newer product, with the "Build-A-Figure" Elite Corporate Kane series being a well-selling exclusive for the retailer. 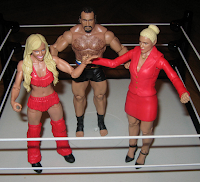 But what about the figures themselves? Although my wallet can't say the same, I have been very impressed with Mattel's recent additions to the line. For once, the company seems to want to attempt to get everyone a figure, including Divas. The company was infamous for thinking that female figures would not sell in a line traditionally marketed to boys. I'm not sure where their surveying is done, but in my childhood days, the boys were just as excited to have female G.I. Joe figures as they were the males. The same should go for wrestling, especially with all of the "Divas Revolution" talk. Lana and Summer Rae, ironically currently embroiled in a WWE feud, are two of Mattel's newest additions. 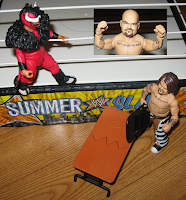 One "first" doesn't involve new names, but rather a never-before-done concept in wrestling figure collecting. With the release of El Torito last year, collectors were able to hold the first match between little people when paired against Hornswoggle. Now both have been re-released in the first wrestling figure two-pack of little people. This Battle Pack represents the feud between the two that culminated in the epically entertaining "WeeLC" match. The set even includes a mini table and chair. Torito is featured in his red attire, while Hornswoggle is in his more recent look that, to me, is reminiscent of 70s-90s wrestler Little Louie. His hair is even removable so that he can "lose" a Hair vs Mask match. Even with Lana and Rusev and the first Mattel Legion of Doom two-pack also in the series, the little guys really stand out. A friend of mine has already deemed this Hornswoggle as his "Figure of the Year." I can completely understand why. 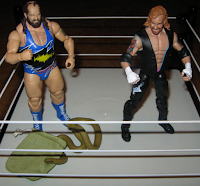 The Elite line, figures with accessories and additional articulation, has also seen new faces. Earthquake and Diamond Dallas Page have joined the "Flashback" collection of wrestlers of yesteryear. DDP is a re-release of the WWE Legends figure, while Earthquake is fully new and comes complete with Damien the snake and his bag for the big man to "squash." New faces in the line include Stardust and Bo Dallas, the latter with his "BOLIEVE" t-shirt. Both of these stars saw their first figures in the Basic line a few months earlier. My own personal rule of thumb is to wait for the Elite when this is knowingly the case, as the included accessories are often worth the extra money spent. 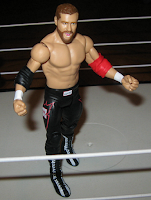 Finally, we have received what should be considered the first NXT figure. While we have seen figures of many who began their WWE careers on the NXT roster as well as the NXT Women's Championship being included with Paige, this is a different scenario. Sami Zayn is the first wrestler to have a figure released before an official WWE roster call-up. I'm sure that it will not be his last and the fact in itself will end up rather trivial, but this is indeed a first. As of now, Tyler Breeze and Bayley look to be next in line for figures while still fully part of NXT, but that can always change.

As the hot weather ends and the holidays fast approach, we're bound to see even more Mattel goodies pop up. Favorites such as Charlotte, Hideo Itami, The APA, Dean Malenko, and Randy Savage are all slated to debut or return, and you can be sure that most of them will pop up here. Mattel is continuing to give us reasons to care about their line, and that deserves our support. Happy hunting!
Posted by J\/\/ at 7:00 PM