When among the first official figure releases of 2018 include two series of legends and a new Build-A-Figure, you just know that it's going to be a good year. Eight new legends, one of which has not been released before in the Mattel line, one who has only had one release, and one who has never before been released under this particular name. That's not to mention a ninth figure who has only had one previous figure release in the course of a forty year career. 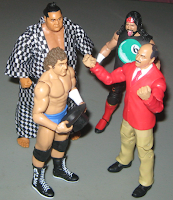 These two new sets, one Elite, one Basic, were released simultaneously and exclusively to Wal Mart. Collecting the Elite set of Mean Gene Okerlund, The Ultimate Warrior, Syxx, and Yokozuna yields you a SummerSlam 1989 interview set. The Basic set of Ravishing Rick Rude, Cowboy Bob Orton, "Million Dollar Man" Ted DiBiase, and Sgt. Slaughter allows you to build Howard Finkel. Even the packaging has a decidedly retro feel and includes a homage to the memorable baby blue interview backdrop from the mid-1980's. The Elite packaging features the new rectangle box design which was recently introduced and seems to make the figures themselves stand out that much more. 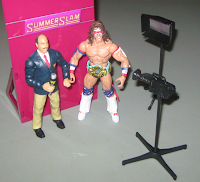 The "star" of the figures is Mean Gene, primarily as it is his Mattel debut. This figure was planned initially as a Build-A-Figure release that is said to have seen limited distribution overseas. Because of this, we actually get "two" designs of Okerlund that we've never before seen in figure form. In the package the figure is clad in his dark blue blazer with beige pants that Gene wore in the mid-1980's. Also included are separate arms and another blazer to create an AWA-styled Mean Gene clad in red. Well it's either representing his AWA days or the legendary announcer suddenly started working for CVS.

Seeing only his second figure ever is "The Fink." The legendary ring announcer is captured in his 1980's look and, thanks to the facial likeness, is light years better than the Jakks Classic Superstars version. The WWE's longest tenured employee comes complete with a classic styled microphone which is also included with Mean Gene. Cowboy Bob Orton, one of the Basic figures needed to complete Finkel, sees only his second release in the Mattel line complete with trademark hat and ubiquitous arm cast. It could have been interesting to see Orton released with a pink cowboy hat reflecting his days with Adrian Adonis, but ultimately pointless seeing as we likely won't be seeing a figure of "The Adorable One" any time soon.

Sean Waltman, a figure veteran under his 1-2-3 Kid and X-Pac gimmicks, also makes a debut of sorts here. For the first time Waltman is officially released as "Syxx," his nWo persona. Though Jakks released X-Pac in his nWo gear many years ago, it was representing his WWE-nWo run as X-Pac. The figure includes his personalized six-ball version of the classic nWo shirt. A slight change in design and name takes what could have been an unwelcome re-release and changes it into a surprisingly fresh figure. 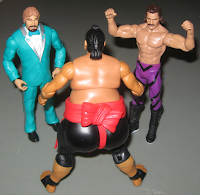 Hasbro fans will appreciate three familiar color schemes returning with Yokozuna, Rude, and DiBiase. The Ultimate Warrior includes what may be the coolest accessory of both sets, that being a "breakable" scepter representing the one used by "Macho King" Randy Savage at the 1991 Royal Rumble. That particular foreign object infamously "caused" the Warrior's loss of the WWF Championship to Sgt. Slaughter. Speaking of Slaughter, this is the first Mattel figure to represent the patriot's brief Iraqi deserter days. 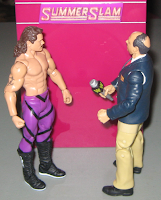 As with their release of Virgil which simultaneously mocked and celebrated his "convention icon" status, Mattel proves that their releases are beginning to include quite the sense of humor. The SummerSlam 89 interview set is the same one which, in an outtake accidentally broadcast on pay-per-view, suddenly fell apart enraging a foul-mouthed Mean Gene. There's even a hole provided which is cut out behind the sign enabling someone to cause the "accident" to happen over and over again. Now, if we could only get a Royal Rumble interview backdrop. Put that cigarette out! 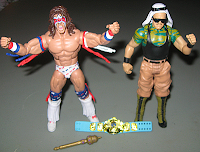 I love these sets, Each figure is a quality repaint or in the case of Okerlund and Finkel, a great line debut. I would have preferred that the choices were completely connected to the late '80s-early '90s era, but I'm not complaining. This is a great way to bring characters such as Orton, who could see lower sales in a standard set, back into the fold. I wouldn't mind seeing names like Bruno Sammartino, Barry Windham, Terry Funk, and others included in future sets like these. It could be a veritable "legends house!"
Posted by J\/\/ at 7:00 PM