There's no better way to kick off the blog in 2018 than with a line that was a major highlight of 2017. Mattel's WWE Retro action figures have pleased both modern and nostalgic collectors alike. As most already know, these figures are based upon the legendary Hasbro WWF figure line. With a mix of current and past names, the first two series were a major hit. With Series 3 hitting stores late last year, the line saw a few changes. 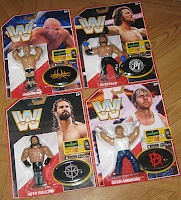 Series 3 brings Goldberg, AJ Styles, Seth Rollins, and Dean Ambrose to the line. Four figures is two down from the six in both previous series. Each figure is now packaged with a display stand featuring their individual logos emblazoned. While the original Hasbro line was designed to utilize "peg" stands, nothing ever developed from it. The stands are packaged right where the "Real Wrestling Action" of each figure should be advertised. This change takes away from the overall nostalgia, introducing a concept that was not present originally. 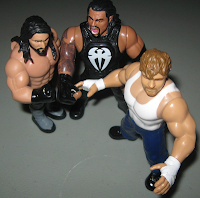 The boarder color on the cardbacks has changed from the first two series, which does jive with the Hasbro style. On the other hand, the inclusion of an ad for WWE Mayhem, an app game, is worse than the addition of the stands. The ad completely cramps the superstar photo on the cardback which was a Hasbro staple. For those of us who enjoy having figures signed, this is extra disappointing. Save the gaming ads for the standard figure lines, not a niche one aimed primarily at collectors. 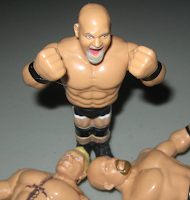 As for the figures themselves, it is also a mixed bag. Glaringly, Goldberg is missing gloves. Has "The Man" ever wrestled without gloves? Certainly not in his WWE return on which the figure is based. The Goldberg "action" should also be switched with that given to Ambrose. Dean is hardly the slamming type, even if Renee would beg to differ. Goldberg should match many of the other "power" figures in this style. 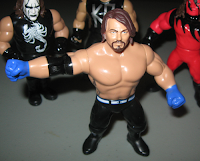 The highlight of the series is unquestionably AJ Styles. Tied (with Series 2 Kane) for my personal best figure of 2017, one of the greatest of this generation translates well into being a "Hasbro." And just as was the case in the original line when the figure "action" matched the real life signature move of the star, one of the best "Real Wrestling Action" moves from Hasbro returns once again as "The Phenomenal Forearm."

While Series 3 wasn't quite as disappointing as I'd predicted, it isn't perfect. More colorful characters are still needed. How about the first female in the Hasbro style? More legends would be welcome as well, as is always the opinion on this blog. In both cases, how about a "Woooooooo!"?
Posted by J\/\/ at 7:00 PM