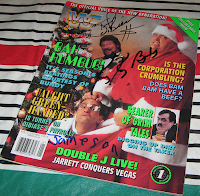 Ahhh 1995. The New Generation. A gimmick that I never necessarily bought into, although I did appreciate that so many of the characters and talent that I started enjoying through wrestling were still around. The cover of this magazine featured three of those with King Kong Bundy, "Million Dollar Man" Ted DiBiase, and Jameson. So despite the '90s being well documented as a time that I least like to remember and have probably written about the least on this blog over the past decade, here we are. Let's take a look at what the World Wrestling Federation was made of during one of its most tumultuous times.

As evidenced by the cover, this is the 1994 Christmas issue. Although magazines are all but a memory now, for those of you who are too young to know, periodicals were usually dated far ahead. We would have purchased this off of the newsstand just as Christmas trees and Kris Kringle were fresh on our minds, thus King Kong Bundy dressed as Santa Claus.

I used the word "tumultuous" above to describe the WWF at this point in time and that was no exaggeration. In front of the cameras the fans were dealing with a constant trade-out of talent in an attempt to introduce new stars and create new superstars. This didn't always work, thus displayed by King Kong Bundy being a lead heel on the roster. Behind the scenes the company was dealing with the fallout of the infamous steroid trial that saw Vince McMahon front and center. In a rare acknowledgement of McMahon as being more than just an announcer, a two page article tells of the trial and McMahon's appearance with Chet Coppock discussing some very real-life situations.

We get a preview of "Caged!," which was the first entry in what was to be a regular series of magazines labeled as "WWF Limited Edition Collector's Series." While there only ended up being two editions, these magazines were to take a look at specific concepts such as steel cage matches and Monday Night Raw. The "Caged!" issue featured glimpses at many matches that were otherwise largely unseen back in the day, seeing as that many of these "blow-off" encounters were either dark matches or limited strictly to house shows. The shot of Rowdy Roddy Piper hoisting both the WWF and Intercontinental Championship belts has always been a favorite of mine. 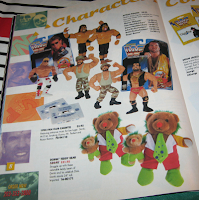 The magazine had other interesting features that weren't part of the WWF's standard operating procedure back in 1995. There were both "The Informer" and "The Bite" penned "secretly" by Vince Russo. Both offered "rumor and innuendo" of "insider" information that pretended to pull back the curtain in an era where kayfabe still lived in a loose sense. "Rookies to Legends," in this issue featuring George "The Animal" Steele, looked at superstars from the past in an era where only current talent was mentioned 99% of the time. To appeal to the kids, we had video game reviews as well as the merchandise catalog showcasing overpriced (for the time) Hasbro WWF figures at $9.99 a pop, as well as now-coveted items such as the Doink the Clown teddy bear, complete with Dink bear. 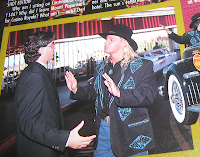 Jeff Jarrett got a load of coverage in the magazine. This issue may show why. Double J has always had a relationship with Vince Russo and in this particular spread the writer is even shown speaking with Jarrett. This time Double J has invaded Las Vegas complete with showgirls and celebrity impersonators. A later issue has Jarrett, along with The Roadie, invading Hollywood and hobnobbing with the likes of "Golden Girl" Estelle Getty. Talk about a clash in my interests with me being an unashamed lifelong fan of the geriatric foursome as well as Double J.

This issue also features the second annual "Dubious Achievement Awards." It's a humorous look at the then-current goings on in the World Wrestling Federation. I remember the 1993 version being a bit funnier, but here we do get a rare shot of Heidi Lee Morgan in WWF Magazine (battling Bull Nakano) as well as one of the few mentions of announcer Charlie Minn. Though I was still an avid WWF viewer at the time, I recall not knowing who Minn was. I do believe that he hosted WWF Action Zone at the time, which I did not view or record for whatever reason.

We wrap up with a look at the WWF Holiday Wish tour, Lowdown (a collection of news worthy blurbs), a puzzle game, and "Scoop Sullivan," a largely forgotten back page cartoon. Though I missed many stars of my earlier childhood, at the time I still ate these magazines up. They were what I ultimately wanted to get into then. Thankfully, as an adult, I got to live out that dream albeit briefly. In 1995, I doubt I had many more Christmas wishes other than that...
Posted by J\/\/ at 7:00 PM