Going "retro" is of course the modern day trend. Every company wants to capitalize on generations who now have disposable income (ha!) to spend by recreating the toys and memories of their childhood. Mattel got in on this with wrestling fans by releasing the Retro line, mirroring the Hasbro WWF line. The last published entry on this blog showcased Series 8, 9, and 10 of that line, which as of press time of this article seem to be the last that will be produced. But that wasn't the only route that Mattel took to get into your wallet as well as your childhood wrestling memories...

Enter Super7. In the past several years this company has taken the action figure community by storm. They have adopted a variety of licenses and created action figure lines that never were, should have been, and in some cases extended others. Together, Super7 and Mattel released a collection of 12 WWE Legends M.U.S.C.L.E. figures. Each packed three to a card, there are four sets altogether. Fans of the original M.U.S.C.L.E. figures probably felt that their minds were read. '80s WWF stars as the most portable "wrestling" figures of the era? It's a natural! 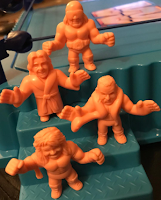 If you weren't familiar with the original M.U.S.C.L.E. figure line, you probably at least remember seeing a handful of them floating around. The acronym stands for "Millions of Unusual Small Creatures Lurking Everywhere." If that sounds like something straight out of Japanese culture, that's because it is. The M.U.S.C.L.E. line was the U.S. version of a Japanese line called Kinnikuman. While the latter was much more of a cultural phenomenon with stories, cartoons, etc., both versions were centered around the tiny figures, some of which were even based on real wrestlers such as Terry Funk and Dusty Rhodes. 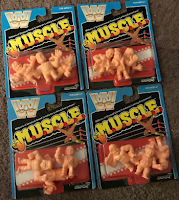 Neither of those legends are featured here, but it's still quite a Hall of Fame lineup. Among the three packs of four figures we have Mean Gene Okerlund, The Iron Sheik, Macho Man Randy Savage, Jake "The Snake" Roberts, Ric Flair, Sgt. Slaughter, Hacksaw Jim Duggan, Rowdy Roddy Piper, Andre the Giant, "Million Dollar Man" Ted DiBiase, Junkyard Dog, and The Ultimate Warrior. Each figure is assuredly recognizable even being that small and molded in the famous M.U.S.C.L.E. pinkish beige. Many have accessories molded on which adds to the fun. With the cast of characters from that era, however, it's hard to make anything but recognizable characters. Not one person could argue that if you did twelve current stars in the same style, those figures would take a bit longer for anyone to differentiate. 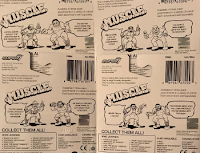 The card backs are a heckuva lot of fun, too. They are designed to be in the same style as the Hasbro WWF figure card backs, and they actually do the job ten times better than the same effort in the Mattel Retro line. The colors, the stars, the logo (albeit WWE-ized) are all here. Not putting the Retro line down now that it's ostensibly finished, but if we came so close here, why could we not have gotten the same effort there? The backs of the cards feature cartoon versions of two of the three characters included in a "showdown," complete with fightin' words. A nice little addition that wasn't necessary and is much more welcome than an ad for some app game or other nonsense. 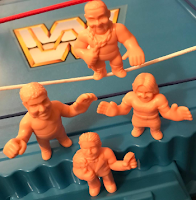 I like these little guys. I'm sure this is it for the WWE sets. The packs can be found at fairly deep discounted prices if you look, but that doesn't mean that the M.U.S.C.L.E. fun has to end there. In addition to the non-wrestling licenses that Super7 has added to the M.U.S.C.L.E. line, they've put out a few packs featuring the Legends of Lucha Libre. Also worth mentioning is the fact that Super7 just announced that they have acquired the license to produce figures for New Japan Pro Wrestling. Will that line spill over into some M.U.S.C.L.E. figures? Seeing the origins of the figures as chronicled above, it would almost be coming full circle.