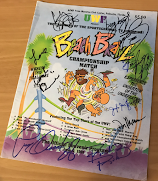 Maybe Herbie did have a use for all of that baby oil three decades ago. No, it wasn't another late night at the office. It was UWF Beach Brawl! We've all heard the stories of Herb Abrams and his ill-fated venture into the sport of kings. He didn't want to just be competition for the World Wrestling Federation, he wanted to be bigger than the Stamford-based company had ever been! TV shows! Pay-per-view! Andre the Giant! Cookies! While some of that did actually happen (do we have evidence that any cookies were ever produced/sold?), three decades later we know the ultimate fate of the man and the company. But one tangible product still exists and today we're looking at it: the UWF Beach Brawl 1991 program!

While there are hats, video tapes and a few other programs floating around (does ANYONE have evidence of those damned cookies?), the Beach Brawl program is my favorite bit of Herbie's UWF memorabilia that is out there. It isn't so much what it looks like, though it does boast a colorful cover and plenty of photos inside. It isn't even that I am an avid collector of programs like many of you reading this. I never sought it out. I believe I picked it up relatively cheap in the last decade. What's really been a blast about owning this thing are the reactions that it gets from the wrestlers signing it.

"I didn't even show up," recalled Don "Magnificent" Muraco as he became the first to sign it. He was correct, he did not show up for his match with Terry "Bam Bam" Gordy, but he is featured in the publication. The infamous Johnny Ace ended up subbing for The Magnificent One. Brian Blair and Jim Brunzell got a great chuckle when recalling working for Herb Abrams as "Masked Confusion" as opposed to their WWF "Killer Bees" personas. Even Mick Foley, the most recent to sign it, marveled at it and recalled Muraco not actually working the event.

The program itself isn't too remarkable and certainly nothing compared to what the WWF was doing with programs or even WCW when they would manage to squeak one out. It certainly isn't cheaply made like a mimeographed independent show program of the era, but color on the inside definitely could've made it stand out a bit more.

Speaking of things for wrestling fans to spend money on, Herb of course loaded the program with opportunities to order UWF apparel and other merchandise. Again, we know that hats and videotapes exist. The "Bruno book" offered would be the first printing of his autobiography that was released around that time. It is interesting to think that a man who built himself on honesty such as Bruno Sammartino would be taken in by a guy like Herb. It's my feeling that Bruno was so anxious to stick it to the WWF at that point that he was willing to go with whoever was trying to create opposition.

Speaking of Herb, one of the last pages in the book is fully dedicated to him and offers a bio that he most-assuredly penned himself. Perhaps the one truism on the page is the feeling that Bruno and Captain Lou Albano being part of the UWF lent credibility. While the promotion ultimately ended up with zero credibility to speak of, it is reasonable to think that some at the time may have thought that the inclusion of such names would in fact mean that there was promise in the company and that would attract both sponsors and fans. 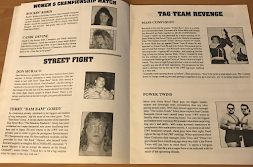 There's really little joy in rewatching anything that was produced by the company. It isn't like a WWF or WCW show from the era where nostalgia hits you at every corner. You can tell by the performances that much of the talent was there for a payday and nothing more. Still, others worked hard and tried to make something of it. I'll leave it to you to decide which names fall under which category. It is worth seeking out at least some of the footage for the sake of history, especially if you watched the Herb Abrams documentary produced awhile back. It's also interesting to see Andre the Giant in his brief appearance. I'm sure he just wanted to hang out with his old friends.

If anything it can serve as a warning. You don't want to end up like Herb Abrams. He tried to warn you right in this very program...