Will You Stop? -- Remembering Gorilla 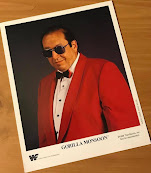 This past week marked twenty-two years since the passing of Robert Marella, better known to millions as Gorilla Monsoon. Though I may have still been publishing my newsletter back in 1999, I generally stuck to wrestling merchandise. This blog was a decade away from being created. That being said, I never had the chance to properly convey my feelings on the life and death of one of my favorite wrestling personalities of all-time. While many wrestling deaths have happened since, many with men and women passing at a younger age than Mr. Monsoon, none have hit me harder. 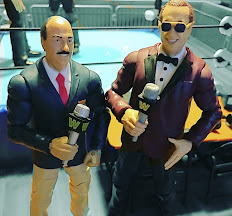 While my parents grew up with Gorilla the wrestler, I grew up with Gorilla the announcer. One of the voices of the World Wrestling Federation. Almost the voice of reason in the crazy, wacky world of the WWF. While Mean Gene was the pitchman who hyped you up, Gorilla reassured you. When he told you that the world was watching WrestleMania IV, you believed it. When he said that the "SRO" signs went up early for a particular event, why would you even doubt him? He was an honest voice in a world that was built upon blurring reality. And while sometimes he would stretch the truth just a bit ("This match would be a main event in any arena in the world."), he always came back around. 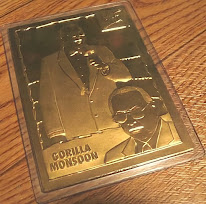 You might even say that Gorilla was the king of the soft sell. Of course his words were meant to get you to come to the next event or purchase that upcoming pay-per-view, but were you ever annoyed or offended by the pitch like when suffering through the announcers of today? Highly unlikely! Another key was light-hearted banter. While it seemingly has no place in today's world, just tune into one of the classic WWF MSG or Boston Garden shows where Gorilla is teamed with Lord Alfred Hayes, Ken Resnick or even Hillbilly Jim. It wasn't all about cramming every second of airtime with the latest Twitter trend. Instead Gorilla and crew would comment on the location, a fan or two, even the food at the arena. It was fun, almost the kind of commentary that you'd hear between pitches on a baseball broadcast. The kind of fun that's been missing from wrestling longer than Mr. Monsoon has been.

And of course, Gorilla had two legendary foils in the broadcast booth, those being Bobby "The Brain" Heenan and Jesse "The Body" Ventura. While Gorilla and Bobby are absolutely classic, especially on Prime Time Wrestling and the 1992 Royal Rumble, I actually preferred the Monsoon-Ventura team. Though they did do some regular television broadcasts early on, it got to the point that they were saved for special occasions. The mixture of banter and comradery between the two had a quality that, in my opinion, has never quite been duplicated. I'm also not ashamed to say that after over thirty years of repeat viewings, I've memorized nearly every line of their ten pay-per-view broadcast team-ups. I'm sure that I'm not the only one.

Sadly, most Gorilla Monsoon merchandise was released posthumously. A glaring omission from the LJN WWF Wrestling Superstars line, three Gorilla Monsoon action figures have since been produced and are rightfully sought-after. There have been some cool trading cards released, but perhaps no t-shirt that I've worn in my entire life has yielded me more comments than one produced by WWE around five years ago. You guessed it. A bright blue tee featuring a stylized portrait of Gorilla in all of his jovial, affable glory. Even Mean Gene himself took note of me wearing it once before his passing. It was truly a happening.

With the way that the industry has changed it's hard to imagine that Mr. Monsoon would have much if anything to do with the wrestling of today. It would have been nice to have seen him reunite and make appearances with other legends at conventions and other events, but I have a feeling that more family time would have been most important of all to him. He was a real guy. A real man. We're just lucky that, through professional wrestling, the world got to know him. Forget just knowing him. We loved him. 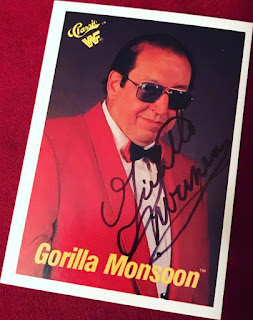