The Ravishing One Cleans Up

That guy is reviewing a figure from D-X? The nWo? The Attitude Era? Doesn’t he always bitch and moan nonstop about that era?

Well, “yes” to all of the above. But like many of you I’m a complex collector. As soon as a suited Ravishing Rick Rude was announced I must say that it excited me as much as a “First Time In The Line” legend figure would. First and foremost I’m a fan of The Ravishing One in any era. Second, I don’t necessarily damn *everything* from the late ‘90s. Third, who remembers Rude’s run as WCW International Heavyweight Champion? Rude appeared in promo shots as well as on television in a suit during that run. Add it all up and you bet that this is a figure that I’m going to love…and review!

Suited Rude comes to us as a Build-A-Figure. These sets are obviously selling as there are more available and/or in production than ever before. A set (that was not reviewed here but was shown on our socials) featuring a child version of Dominik Mysterio was released not long ago and Royal Rumble and WrestleMania sets featuring Dok Hendrix and Mean Gene Okerlund in a tuxedo, respectively, are in the pipeline. Each set now seems to be themed towards a specific “Big Four” pay-per-view or “premium live event” as they’re now known. The Mysterio set was geared towards SummerSlam while the group we’re looking at today is based on the Survivor Series. 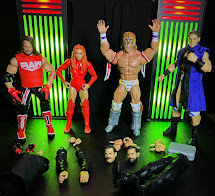 With a few exceptions, most of the sets as of late seem to feature one “legend” and three current talents in addition to the Build-A-Figure. In case this is your first rodeo, pieces of the BAF are included with each of the individual figures thus getting you to purchase all four main figures. To be honest I’m getting less and less enthused with the main four figure choices. In one respect it’s the only way that I’ll purchase repaints/re-releases of certain stars. I think we have enough “modern” Shawn Michaels and Rey Mysterio figures to last a lifetime. They say “vote with your wallet,” but in reality that just doesn’t work. These figures sell and, at least in my experience, are rarely seen on the pegs. You have to remember that disregarding those of us who are buying them all to create the BAF, you’ve got kids and parents grabbing for the latest HBK or AJ Styles. It’s a formula that works for Mattel. If it keeps getting us figures (especially legends) that won’t be produced otherwise I will continue to stick by it. I’d be a hypocrite if I complained any more on the topic as I’ve picked up every Mattel WWE BAF set since the first. Between JJ Dillon, Paul Ellering, Teddy Long, The Fink and Jim Ross, among many others, the program has yielded some great additions to the line.

This time around we’ve got The Ultimate Warrior, Becky Lynch, Drew McIntyre and AJ Styles. Interesting to me is that it’s The Warrior who contains the most unique pieces to build Rude – his heads. That’s right, you get both a mustached and bearded head. If you’re really dead set on not picking up the other three figures you could easily use the heads on another suited figure body. With a new look and rather fresh head sculpt, this figure of The Ultimate Warrior will be the hottest seller here regardless of including the “crucial” pieces to the Rude BAF. Ultimately (no pun intended) it comes down to budgetary restraint as to which figure includes which BAF piece. There has been at least one instance in the past (and one ostensibly upcoming in the Rumble set) where only three of the four figures in the wave were actually needed to build the complete fifth figure. 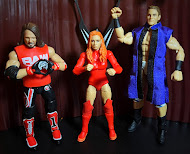 I’m not going to spend too much time on Lynch, McIntyre and Styles. Not only are they fairly uninteresting, but after a decade I know this blog’s audience. Most modern day-only fans aren’t looking for what a 40-year-old man thinks of the latest figure of “The Man.” She looks good, as does Styles, but I just have a feeling that they’re underwhelming releases even to those who actively collect them. McIntyre, on the other hand, is a bit better. I can remember when, not too long ago, the Elite version of “young” Drew from the very early days of the Mattel line was a hot commodity. With upgrades in figure production technology this one is obviously better and comes with a pretty cool soft goods entrance vest that the original lacked. While the fourth figure and BAF Rude are the obvious gems, this Drew isn’t the worst inclusion and is sort of fun as long as we have to include modern names. 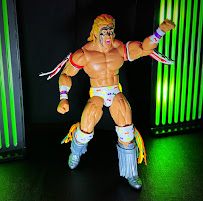 Speaking of that fourth figure, you already know that it’s The Ultimate Warrior. With a fairly new head sculpt (previously used just once) and paint designed to resemble his look from the 1990 Survivor Series, this is an absolutely stunning figure. I can practically hear him declaring that Tito Santana’s fandom/mania/whatever is “Arriba Derce” to go along with “Hulkamania” and “Warrior Wildness.” You didn’t know that? Go watch the pre-Match of Survival promo. I haven’t done it yet, but throw a winged eagle belt on him and this just may be a picture perfect figure. Everyone goes wild for the “Ultimate Edition” figures of The Warrior and rightfully so, but for my money I’m not sure that we have a better one than this right here. The skeletons certainly made their sacrifice for this figure…

And we come to the Build-A-Figure. Some may not be as excited about this one as I am, but for me it’s just a figure that should’ve been made long ago. Suited figures are the favorite of many. There’s something very “old school wrestling” about classic wrestlers in suits. If Rude’s career had gone on as long as it had every right to, I could see him transitioning away from the robes and more towards this. This is another figure that will look great with a belt, preferably “big gold.” I didn’t do a picture of that as of yet, but I’m sure one will pop up on our figure photography social (IG: The_Figure_Arena) or even on Twitter. One issue that mine does have is that the left arm won’t stay attached. My BAF JJ Dillon and Gene Okerlund (who was ultimately not a BAF in the U.S. but came with “switchable arms” anyway) have had the same issue.

As much as I love the BAF I can honestly say that I feel that this set won’t be worthwhile to most collectors. Despite it being one of my top wanted versions of Rude I can see a lot choosing to pass. If these show up in abundance at retail it will be The Ultimate Warrior flying off of the shelves. If you’re any kind of Warrior collector, you’ll need this version. There have been “must have” BAF sets and others that are less than such. Unless you feel as I do about building Rude, this one will likely fall in the latter category for you. The upcoming Royal Rumble Dok Hendrix BAF set features Vader (in an update to the “Vader Time” version), Rey Myserio (again), Damian Priest and Brie Bella. The WrestleMania set featuring the Mean Gene BAF is a breath of fresh air for legends collectors with WrestleMania VI versions of Dusty Rhodes and Macho King Randy Savage as well as Hollywood Hogan and The Rock. I guess we could classify that foursome as “The Skydome Series.”

In the meantime, maybe go and pull up the 8/18/97 episode of Raw. Don’t do it on Peacock or you’ll miss the classic, and now edited, Rick Rude theme. The show opens with Vince McMahon introducing Rude as “one of the all-time World Wrestling Federation greats” and the subsequent promo gives us a little taste of what may have been had Rude not jumped to WCW only to be totally wasted in his final years. Perhaps the seeing last great incarnation of “The Ravishing One” will inspire you to make your Mattel collection a little more “Rude,” as well.