The Matriarch's of The Ring: Mae & Moolah 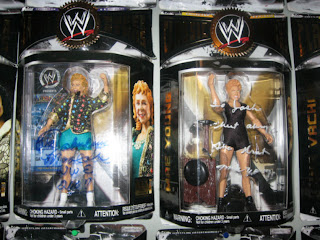 When I meet a name in the game I love so dearly, I usually keep the gushing to a minimum. I say hello, ask them to sign my item and/or pose for a photo, say a few words if they ask/tell me something or if I have something to say them, thank them, and I'm on my way. This weekend, I met one that I felt I had to gush over. True ring royalty (She was Queen of the ring at one time...) and great-grandmother figure to today's stars, the one and only, Mae Young. 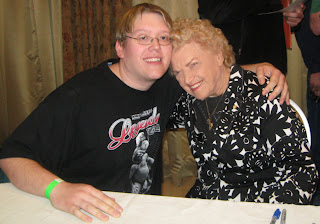 Mae was scheduled for a rare appearance in New Jersey, so my crew and I had to go. While many other stars were at the signing, and while Exotic Adrian Street and Miss Linda were incredible to meet, Mae Young was my sole reason for being there. I told her that, and while I'm not sure she could hear all of my gushing, she pretended to anyway. She did that with all of the fans, though. Sweet, endearing, and grandmotherly, it was positively awesome to see all of the other wrestlers and fans alike pay homage to the octogenarian ring legend. A few of us crowded around at the time even got to see Mae pop Ox Baker right in the ol' boiler!

While Mae is much more widely known for her antics in the past decade on WWF/WWE television, it's largely forgotten that her ring career spans back to 1939! The woman wrestled on December 7, 1941! Aside from photos and a few magazine articles, her career is largely confined to her crazy skits and bumptaking on Monday Night Raw, but sweet Johnnie Mae seems okay with that.

And if she wasn't, I may not have gotten my kiss picture... 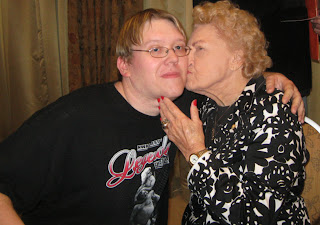