Ok, so he didn't have Vince McMahon's mind for marketing. Vince knew that Hogan, Andre, and Nikolai's mugs would be gold when plastered all over posters, cartoons, and disposable party plates. Jim Crockett Jr. sold...bandana's. They were very nice bandana's, though, and you can see the Road Warriors version in the pages of this blog.

Near the end of his run as a wrestling promoter, Crockett licensed what may have been his most ambitious product--a set of trading cards. These weren't just any cards, however...these were NWA WRESTLING SUPERCARDS. 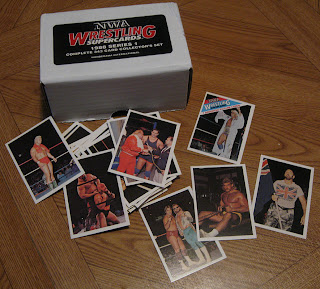 Produced by a company called Wonderama International, the 343-card set included all of your favorite late-1987 & early-1988 NWA Wrestling stars. Flair, Rhodes, Babydoll, The Garvin's, Luger, and even Gladiator's #1 AND...gasp...#2 are here in full-color glory.

It's a really nice set...not without it's flaws. Unfortunately, most of the studio shots included are of lower-tier talent. While a lot of nice ring shots of the NWA megastars are included, some of the pictures chosen leave many questions left to be answered. Perhaps Wonderama was desperate for any shot they could find to produce such a massive set? While signing a card shown below, Ole Anderson let out an expletive wondering how such a photo of him was chosen for the card. 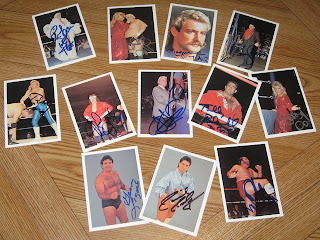 Signed Cards From The Set (Top To Bottom/Left To Right): Ric Flair, Baby Doll, Magnum TA, Paul Jones, Bobby Eaton, George South,
JJ Dillon, Tully Blanchard, Baby Doll, Gene Ligon, David Isley, Ole Anderson.
The set's highlights outweigh the "Ole Anderson Dance Party" pictures by a long shot. Many of the sports giants had either their "rookie" card in this set or their only card(s) altogether. Pretty much the entire company was immortalized in a trading card here. From Sting to Jim Ross to The Mighty Wilbur to David Crockett, they're all here. Woman's stars like Misty Blue Simms and Comrade Orga are here, as are ultra-cool logos of the top stars.

A full set can be obtained in a box as shown in the first picture. The set is labeled "1988 Series 1," but aside from a small trial run series released in 1987 and featuring similar photos as the first 49 cards, no other series' were produced. Although the set has an "official" 343 cards, there are a few "extra" cards as well. The Flair card shown in the first photo with the top left corner logo was a card used for the "rack packs" originally sold in stores. There are also four cards which were "replaced" during the run of the set. Cards #68, #74, #99, and #136 became "logo" cards somewhere during production, so both "versions" of these four cards, as well as at least one of the aforementioned Flair "logo" card should be included in a full set. The only easy and affordable way to obtain a full set is to find one for sale. Due to the huge amount of cards in the set and the popularity of certain cards over others makes it near impossible otherwise.

If Ted Turner had not bought the company, would we have seen a Series 2? Would more studio shots have been included? Would Ole have stopped dancing?

I actually picked a few of those up. They are quite the interesting pieces. I picked up Baby Doll(a few to be exact), Barry Whindam, Horsemen, Flair, Sting I think and a few others. They are great collectibles and look fantastic signed.

Agreed. I got two Larry Z's signed tonight. One with Baby Doll that I didn't have her sign for some reason, but I will next time. She signed about six or seven different ones for me last year at Charlotte and knew exactly where each of the shots was taken.