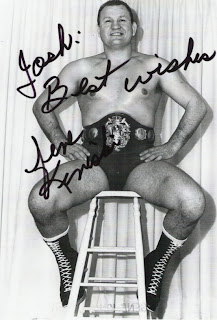 Former NWA Champion "Big Thunder" Gene Kiniski passed away today at the age of 81. For those who follow the older generation of stars, this was not unexpected. Reports of various ailments, most notably cancer, Gene was battling hit the newsletters and Internet earlier this year. But battle is what Kiniski did. He fought till the very end, and while quoted as not being pleased at how he was going out, The Champ was very happy with his life and said, in his last few months, that he'd do it all over again the same way.

May his impact on his industry and on those in his life not be lost on the next generations.
Posted by J\/\/ at 9:11 PM