In a usual entry I try and cater to the educated and seasoned wrestling memorabilia collector. This time we're taking a break from that. This entry will cater to someone who may not even be a wrestling fan, but instead has one on their holiday shopping list. Young or old, male or female, erudite or hayseed--anyone can be a fan of pro wrestling. This entry will highlight items that should please any of the above recipients. 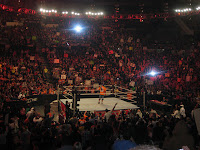 The first and most traditional wrestling gift is an event ticket itself. Traditionally business picked up the week of Christmas due to this exact reason: wrestling tickets DO make great gifts. Not only does it thrill the recipient upon opening the box or envelope, but the lucky fan also has something to look forward to in the days following Christmas. In the modern era, even something like a WrestleMania ticket or a VIP pass to one of the many wrestling fanfests or conventions would be included here.

These days fans don't have to leave their house to be in on the action of any sport or entertainment entity. Video games are a big part of that and one such game that will be under more trees than most others this Christmas is WWE '12. The newest WWE game is already getting rave reviews for an all-new system of play during matches as well as a wide variety of characters. While the inclusion

of Brock Lesnar as a Legend in the game has been getting a lot of talk among fans, it's the home video game debut of Demolition, Ax and Smash, that has this fan looking to eventually snap up a copy.

Although video games provide a great simulation as well as a way to create your own dream matches, wrestling action figures have been around a bit longer for similar play activity. These days it isn't just the kids collecting the plastic representations of their favorite stars. Since we often focus on the adult side of collecting, in this entry the emphasis will be on figures and items geared towards children--not to mention ones able to be had for a great price.

Retailers will often have exclusive sets at this time of the year to encourage picking up a package deal for little Johnny...or little Jimmy. Mattel's WWE line is well represented at a few different stores this year.

Wal Mart stores are carrying a set based upon the recent feud of John Cena and The Miz. Figures of both men are included with a ring and cage for just $25. The cage even includes an

opening door which has been often omitted from toy cages over the years. Considering the figures often retail for $8-$10 alone, this is quite the deal for holiday shoppers and collectors alike.

One line that has captured the interest of collectors young and old is the WWE Rumblers series from Mattel. Figures are small, almost Little People-like, representations of current WWE stars. Discount grocery store chain Aldi is carrying a Rumblers ring along with figures of Rey Mysterio and Kane for just $9.99. Aldi stores are known for having a section of toys during the holiday 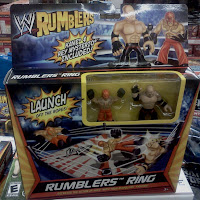 season and this year wrestling fans really can't go wrong by stopping in. Be sure to pick up a cheeseball while in the store as at under three bucks the Aldi Happy Farms brand makes Hickory Farms smell like an old barn.

If you're really looking to go discount, the various dollar stores have come through like always. Various wrestling figures and rings of all shapes and sizes are once again available en masse in stores such as Dollar Tree, Dollar General, and Family Dollar. While the figures may just be "generic" versions of our favorite stars, to a child a wrestling 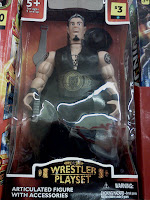 figure is a wrestling figure. This is especially true to those who are less fortunate. A figure and ring gift set at one of these stores can often be had for $5 or under. A purchase of one of these as a donation to a charity such as Toys For Tots would be a wonderful way to help a less fortunate wrestling fan this season. I should mention that many of these sets include a very nice generic figure based off of Mistico...now known as Sin Cara.

With his popularity among children I can't even begin to imagine the fun that a needy child would have with one of these sets.

There are some adult fans that could care less about games or toys. Some simply want an adult gift. While the amount of DVDs and books with the topic of wrestling are plentiful as always, my best suggestion would be something for

the "flavor" of Christmas. Along these lines, I can personally recommend any of JR's excellent products. While the legendary announcer's barbecue sauce has found its way onto the kitchen shelves of legend, many other products are also available under the JR's label. Now available exclusively in WWE Shop, JR's beef jerky is still the best that I have ever tasted and the Chipotle Ketchup and Main Event Mustard are staples in my refrigerator. Many combos are available that include autographed bonus items making it an

extra special holiday gift. Be sure to pick up a set that includes the mustard as it will come in quite handy for New Years kielbasa feasts.

Lastly, one can never go wrong with a vintage present. eBay is still the #1 place to obtain such items, and as I've said many times in the past, currently wrestling memorabilia is largely a buyers market. Items that you may have seen years ago sell for a large sum may now be obtainable for a fraction of the cost. It's hard to fail with a gift from the past.

These are just a few ideas for the wrestling fan on your list. If you have any that you think I missed or would just like to share feedback, please do so on our Facebook Fanpage.

And of course, your friendly blogger always welcomes holiday gifts. Think of it as that holiday tip to your postal worker or trash collector.