The Cure For A Hangover (II)? Classic WWF Cards!

It's very hard to believe that December 2011 is upon us. It seems like only yesterday that spring was in bloom and summer was on the horizon. That would be just about the time that "The Hangover II" was hitting theaters and funny bones alike.

The comedy blockbuster, which is set to hit DVD and Blu-Ray this coming Tuesday, caught the eyes of wrestling fans and collectors the world over. In the opening moments of the film viewers delve into the bedroom of arguably the film series' most popular character, Alan (portrayed by 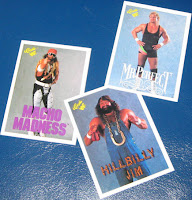 Zach Galifianakis). Despite the scene probably clocking in under five minutes, the prop department went to great lengths (and expense) to illustrate Alan's love of '80s WWF wrestling. Not only does his room include shelves featuring nearly the entire LJN WWF action figure line (including the Hasbro-released LJN-sized Sgt. Slaughter) but the walls are adorned with posters of Randy "Macho Man" Savage, Hillbilly Jim, and Mr. Perfect among others. The interesting thing about these posters is that they are not commercially released posters but are instead extremely large blowups of cards from the 1990 WWF trading card series produced by Classic.

It's interesting to speculate just why these cards were blown up instead of using existing posters. While I'm no expert in the field of photo development, it seems that the price of enlarging these small cards would far outweigh the price of obtaining a few posters. Similarly, it's surprising that 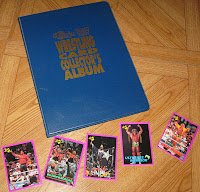 the prop department even obtained the rarer figures from the WWF LJN line rather than just using the more common (and remembered) earlier characters.

As far as the Classic WWF cards, movie prop use or not, the series can be considered rather iconic. The set is a beautiful time capsule of 1989 WWF featuring a wide variety of names from main eventers such as Hulk Hogan, Ultimate Warrior, Dusty Rhodes, and Rick Rude to lower card talent like Brooklyn Brawler, Red

Rooster, and Barry Horowitz. Even managers, announcers, and officials found their way into the set.

The card set is not at all rare and was mass produced to be released several different ways. Cards were released in packs (packs often contained the same cards in the same order), boxed complete sets, and as a complete set packaged with a blue album and five exclusive purple border cards.

While the set was released and dated 1990, the photos reflect the 1989 roster as mentioned above. There is a rare earlier version of the set dated 1989 that includes cards of the Twin Towers (Akeem & Big Boss Man) together as a team. Many of the same photos were used on another 1989 card set released exclusively in 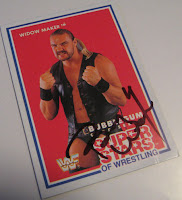 New Zealand from a company called Market Scene Limited. These cards feature pink, blue, and purple backgrounds behind the wrestlers.

The Classic Company released another set later in 1990 featuring action shots from the first six WrestleMania events. These cards are very similar in style, production, and release. A complete set was released with this series as 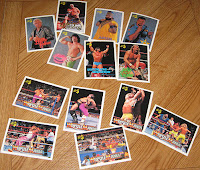 well, with the album being red instead of blue.

Most of these cards will likely never be worth much monetarily but are easily obtained and would make a great gift for any fan of '80s and '90s wrestling. The cards are also fun to get signed, especially the sharp studio shots.

Who knew that the set would be immortalized on celluloid over twenty years after their original release? Classic indeed! 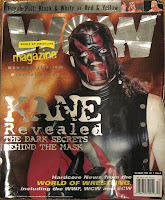 It looks like Bryan Danielson, aka Daniel Bryan, may finally be getting his shot at the top of the ladder. Although his fans have been calling him "the best wrestler in the world" for years now, to the mainstream wrestling fan it isn't until a star reaches the top of the WWE that one can make that claim.

With his star brighter than ever, it's worth checking out one of Danielson's earliest appearances in wrestling media. Going back twelve years, World of Wrestling (WOW) Magazine did a multi-page story on Shawn Michaels in his first 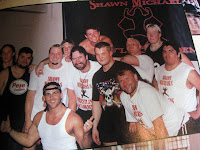 retirement. Pictures of his home life with wife Rebecca (Nitro Girl Whisper) as well as shots at his wrestling school were included.

One group shot of his students and trainers stands out above the rest. Sharp-eyed fans will spot the late Lance Cade as well as Brian "Spanky" Kendrick. To the left of Kendrick, almost obscured by his fellow pupils, is the future Daniel Bryan at age 18. Who else can you name in the photo?
Posted by J\/\/ at 8:26 PM