The Saga of Scott Schwartz & The LJN Don Muraco 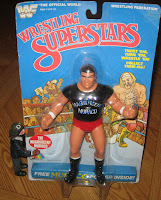 It's happened to most autograph collectors at least once.  Every so often you get an autograph that just doesn't come out quite right.  You don't get mad about it.  It becomes a "happy accident."  It's another story, another experience, another conversation piece.

At a recent signing I had the iconic Magnificent Don Muraco LJN WWF figure to be autographed.  The man who was known as "The Rock," long before Dwayne Johnson came along, is a very nice guy.  For whatever reason, Mr. Muraco decided to sign the figure on the plastic bubble in blue Sharpie over the figure's black shirt.  I didn't stop him and it didn't bother me.  I have a lot of signatures from the legend and if I can see the autograph, that's what matters in the long run. 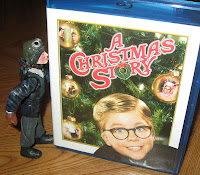 Fast forward a few hours to later the same day when my friends and I caught up with actor Scott Schwartz.  Everyone knows Scott from roles like Jackie Gleason's son in "The Toy" and as Flick ("Stick my tongue to that stupid pole?  That's dumb!") from "A Christmas Story."  What many fans do not know is that Scott was actually a part of the WWF in the mid-1980s.  From being part of the ring crew to playing Roddy Piper's "son" in an in-ring skit, Scott is full of great stories about the Rock 'n Wrestling era.

Scott attends these shows both as a fan and as a vendor with a table full of great shots from his film career.  He even has photos of his time with the WWF.  The first time that I met him at one of these shows, Scott had in his possession one of the aforementioned Don Muraco LJN figures to be signed.  I, myself, did not own a carded version of the figure at the time, but it was something on the back of the card that particularly intrigued me.  In the photo on the back of the card which shows Muraco entering the ring, Scott Schwartz himself is shown talking to a fellow WWF employee named Pat.  The photo was taken at the Capital Centre in Washington D.C. which as many fans know was a WWF hotbed at the time. 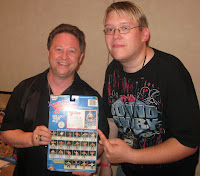 At this more recent show, I told Scott how much I enjoyed knowing this cool little factoid and that I had indeed brought my own Muraco LJN this time around.  Scott asked me to see it so that he could once again tell the story and even offered to autograph the back of the card.  It turns out that this was the first one that he had ever autographed and even marked it as such.

Knowing little stories and trivia like this can make collecting all the more fun.  This one certainly made the somewhat disappointing Muraco signature all the better.  You may just run into Scott at a wrestling convention, celebrity autograph show, or even at his memorabilia store in California.  If you do, be sure to ask him about his wrestling days (I recommend the WrestleMania 2 story) and he may even sign your LJN Muraco.  Remember though, yours will not be the first!

To see more figures, autographs, and fun items like these, don't forget to "Like" our Facebook Fanpage!  We recently passed the amazing milestone of 1,000 "Likes" and trust me when I say that the best is yet to come!
Posted by J\/\/ at 7:00 PM

Tremendous Blog, I wish I could meet some of these folks you right about. I did get the pleasure of talking with Scott and these wrestling stories are fantastic, keep up the great work.