That's one statement that you'll never see promoted in these pages.  Myself, like many collectors, thrive upon the glories, and glorious memorabilia, of the past.  That being said, longtime readers will know that I frequently review new product and am always open to what's coming in the future.  I decided that it might be fun to once again take a look at what's on the horizon in wrestling collectibles. 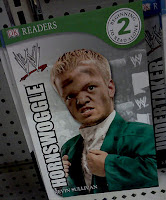 Although nothing like the '80s "boom" period or the Attitude Era, there is a surprisingly large amount of items on the market today.  With the "PG Era" WWE in full-force, it's no wonder that many of these items are geared towards kids.  WWE branded children's books, apparel, and even linens sit alongside merchandise from SpongeBob, Batman, and other kid-friendly properties.  While I hope that we don't see A.J. pillowcases anytime soon, the childlike characters such as Hornswoggle are very prominently featured.  With "Back-To-School" time (thankfully) coming right around the corner, expect to see WWE backpacks and stationary sets once again at retail.

Even in a somewhat milder WWE world not every item is for the youngsters.  BIC has released large lighters featuring some WWE Superstars who aren't as frequently featured on items such as Layla, The Miz, and Eve while apparel in the adult sizes seems to sell briskly.  WWE seems to finally be grasping the concept of fans wanting to have a "wrestling shirt that doesn't look like a wrestling shirt." 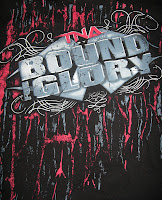 While some fans are insulted by the notion, it does make a lot of sense.  Although fans should be proud of their allegiance to the squared circle, wrestling apparel has often been notoriously garish.  This is, in part, due to the fact that the apparel worn by the wrestlers themselves is loud and eye-grabbing.  For a few years now TNA has seemingly understood the "apparel perils" of wrestling fans by offering t-shirts that are simultaneously stylish and fun.  The promotional t-shirt for TNA Bound For Glory 2011 is one such product.  Another innovative example is a shirt for TNA Knockout Velvet Sky which was specifically designed for men. 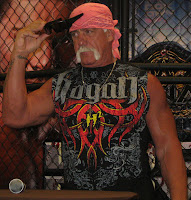 "Innovation" could actually be used to describe many of TNA/Impact Wrestling's products, but sadly there isn't much distribution for them outside of their own retail website.  Seeing as how the company's trading card and action figure lines frequently sell out, it may not be a bad time for TNA to explore getting more items into brick and mortar stores.  With Hulk Hogan aboard for nearly two years now, it almost seems like a no-brainer.  "Hulkamania" shirts sell no matter which company's banner they are sold under and TNA has even made a stylish new version of the red and yellow. 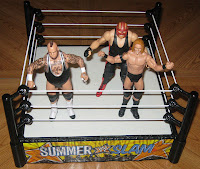 It's hard to believe, but there has not been a time in nearly three decades that wrestling action figures have been absent from store shelves.  In fact, I'd wager that many of you are reading this blog because of a love for them.  While Mattel continually floods today's stores with countless re-releases of Randy Orton, fans clamor for figures of new talent, both male and female, as well as legends.

Another blow to collectors was delivered this past week from Mattel.  It seems that the long-awaited Miss Elizabeth figure, slated to be released through their Mattel Collector's site, is now scheduled to be released in one of the standard "Elite" lines.  This ensures that the figure will be next to impossible to find at retail.  The previous Legends figures released through the Collectors site, while around $28 after shipping, were at least easily obtained.

This is just another blunder in what could be a great line if it were not impossible to collect thanks to issues such as these.  While some Jakks figures were harder to find than others, most "limited" figures were at least repaints and not long-awaited characters like Elizabeth.  Hopefully Mattel realizes their mistakes before it is too late. 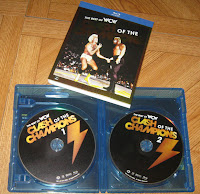 In a more positive area, WWE Home Video has released another winner with their recent Best of WCW Clash of the Champions DVD and Blu-Ray.  Although full Clash releases would be preferred, WWE whipped up a very enjoyable collection of matches from the entire run of the Clash.  Making it even better is the fact that WWE recently had it, as well as many other DVD and Blu-Ray releases from their library, available at rock bottom prices through their website. $9.99 new release wrestling...err...sports entertainment Blu-Ray discs?  I'm there.  In a related note, it appears that the Blu-Ray release of No Holds Barred recently mentioned here has been delayed or canceled.  The DVD was in fact released, but I have a feeling that we'll be seeing this one for under $5 sooner rather than later.

With events like San Diego Comic Con as well as the holiday buying season coming sooner than anyone would want to admit, more new and exciting products will be flying onto shelves.  Will there be more cool wrestling t-shirts?  More legendary matches on DVD?  Mattel figures that aren't Randy Orton?  Time will tell.  The only thing we know at this juncture is something that we have learned after a painful lesson this past Monday night... 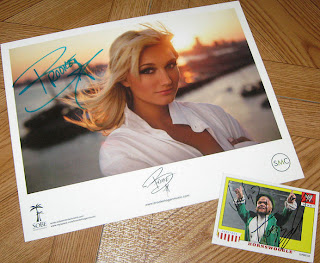 Even Brooke Hogan makes more sense as an authority figure than...Hornswoggle.
Posted by J\/\/ at 7:00 PM