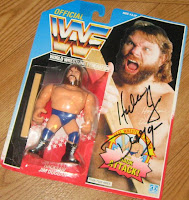 American patriotism is a gimmick that has stood the test of time in the wrestling world like no other.  Put Hacksaw Jim Duggan into a wrestling ring in the year 2012 and suddenly it's 1988 again.  What gets your blood pumping more than the patriot battling the evil foreigner with flags waving and the security of the nation hanging in the balance?  It doesn't get more basic, yet engrossing, than that when it comes to losing yourself in a pro wrestling match.

I've said it before..."Hot Dogs, Apple Pie, & Wrestling."  Wrestlers such as Duggan, Sgt. Slaughter, Hulk Hogan and events like SummerSlam and The Great American Bash can take a normal summer wrestling card and turn it into a patriotic spectacular.  It's no mistake that memories of those stars and shows often stand out proudly in the minds of many a wrestling fan from the '80s and '90s.

In this latest edition of MarketWatch, we'll take a look at some items that were derived from these icons of wrestling Americana and examine what they've recently sold for on the secondary market.  Put down the sparkler, take a sip of Diet Pepsi, and remember what wrestling, in many minds, is truly all about.  Although some examples shown are autographed, the prices noted were for unsigned items. 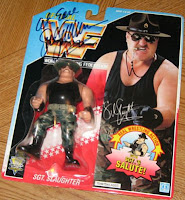 *Even with all the patriots in wrestling, there's only one Real American Hero--Sgt. Slaughter!  His involvement in Hasbro's G.I. Joe: A Real American Hero franchise cemented him as an icon of the 1980's.  Although Hasbro produced dozens of Slaughter figures over the years, his 1992 figure was the only one done for the WWF license.  All of the other Hasbro-produced Slaughter's, including the 8-inch figure often included with the LJN line, were made for G.I. Joe.  The figure is actually not in a wrestling outfit at all, but rather garb that he wore in promotional photos and a vignette or two.  For twenty years that's been quite alright with wrestling fans.  The figure is beloved for an incredible facial sculpt and "Sgt.'s Salute" action.  The figure has recently been selling for between $30 and $60 as has his tag team partner, the 1991 Hasbro WWF Hacksaw Jim Duggan.  The Sarge was not only the first wrestler that I ever had the pleasure of meeting, but Slaughter and Duggan were the first "good guy" tag team that I ever saw wrestle live. 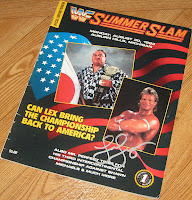 *Like Slaughter and Duggan, SummerSlam holds personal memories for me as well.  The 1995 edition was the first pay-per-view event that I attended live.  It was two years earlier in 1993 that the event was patriotism at full-tilt.  SummerSlam 1993 saw "The Narcissist" Lex Luger go "All-American" in his "Call To Action" campaign against then-WWF Champion Yokozuna.  Even if the event fell a bit flat up against the amazing build, it's still a fun time to look back on.  The program for the event, featuring a photo of Luger still in his Narcissist days, recently sold for $30.  All WWF pay-per-view programs have seemingly been on a monetary upswing, but true collectors know that they have always been items to treasure. 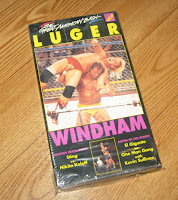 *SummerSlam, as big as it has become, was the not the first patriotic wrestling spectacular.  That honor would go to The Great American Bash.  From tour to NWA, WCW, and WWE pay-per-view event to being celebrated as an episode of Smackdown, the Bash remains a staple in many fans summer wrestling diet.  In 1991 this particular meal was regurgitated.  WCW was in shambles as bad management and the departure of Ric Flair ripped the company apart.  The event was a disaster from top to bottom with chants of "We Want Flair!" echoing throughout the Baltimore Arena and a makeshift championship belt used in lieu of the "Big Gold" belt which had left WCW with Flair.  Despite the mess, the Turner Home Video VHS release of the event was always one of the higher valued tapes.  Selling recently for just $40, maybe fans have finally gotten their fill of the Bash that was more of a gash...in WCW history, that is. 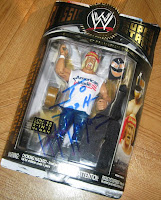 *WCW would go on to recover, and in a few short years a "Real American" would enter the company.  That would be, as if it needed to be said, Hulk Hogan.  While patriotism is included in any number of "Hulkster" products, my favorite Hogan action figure of them all simply screams, "USA!"  This would be the Jakks WWE Classic Superstars "Real American" Hulk Hogan figure.  This figure was only available through a ticket redemption program.  Replica WrestleMania tickets were included with various other Classic Superstars figures.  When a full set was obtained they could be redeemed, via mail, for this amazing figure.  Hulk is clad in his white "American Made" shirt, "Hulkamania" bandanna, and blue workout pants.  Also included were his workout belt and alternate "Hulk Machine" gear from his 1986 appearances as part of The Machines tag team.  Secondary market value of the figure has differed greatly since it was first available.  Most recently the "Real American" sold for $75.  In my opinion, value will only go up as more and more collectors decide that this is one they want to keep. 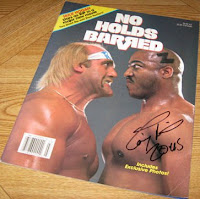 *Speaking of Hulk Hogan, there is one item that may not have too much to do with patriotism but absolutely needs to end this entry.  At long last, WWE has released the 1989 movie "No Holds Barred" on DVD and Blu-Ray.  Panned by some and enjoyed by many, the movie starred Hogan and Tiny "Zeus" Lister and was produced by Vince McMahon.  The movie did not do as well at the box office as was hoped which probably led to having relatively few merchandise tie-ins.  Although Zeus did get a figure in the Jakks WWE Classic Superstars line, it was probably more due to his brief wrestling career than the movie itself.  One item that is still available on the secondary market is the No Holds Barred program magazine.  Including full-sized posters and a ton of film hype, the program has recently sold for just $20.  A bargain price for a nice item that certainly isn't a piece of...dookie.
Posted by J\/\/ at 7:00 PM