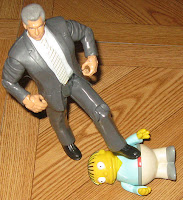 Did you know...that WWE celebrates the 1,000th episode of Monday Night Raw next week?  Of course you did.  You also knew that Monday Night Raw is the longest running episodic prime time show in the history of television.  To Hell with the fact that all of the "trailing" shows like Gunsmoke and The Simpsons don't run every week like pro wrestl...err...sports entertainment does, but why let facts get in the way of WWE truths?

Nonetheless, Raw Episode #1,000 is upon us.  While I still wonder if a few early telecasts that opened with Rob Bartlett in an empty Manhattan Center announcing that highlights from previous episodes (essentially reruns) would be shown in lieu of a new episode actually count, it's an impressive feat regardless. 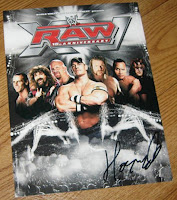 I can still remember when I first heard of Monday Night Raw.  It was on a late-1992 episode of Prime Time Wrestling.  Vince McMahon was at the helm of the long table which was the central part of PTW in it's final form.  I'm not sure if it was the exact same episode, but it was right around the time that Bobby Heenan introduced Jerry "The King" Lawler as the newest member of the table discussion as a replacement for the recently babyface-turned Mr. Perfect.  In the episode that included the Raw announcement, Vince spoke "via satellite" with the newest tag team to join the World Wrestling Federation, that being The Steiner Brothers.  It was an exciting time to be a WWF fan.

Although excited, I didn't quite comprehend the concept all at once.  Due to Vince's passion-infused voice, I misheard his announcement as "Monday Night Rawl."  I didn't know what a "Rawl" was, nor do I to this day, but who really knows what a "Raw" is, either?  Fast forward to the first episode and while I finally got that the title was "Raw," I had no clue why Woody Allen and Mia Farrow would be battling it out in a cage match the following week.  Yes, as some sort of joke, that was indeed announced for the second episode, complete with accompanying graphic.

While those two never made it to Raw, it's amazing just how many people from both wrestling and other forms of entertainment have.  In a world where wrestling telecasts have often been looked upon as low brow entertainment, Raw has become a cultural mainstay.  People know Raw.  People know that it's on Monday Night.  While the winds of change blew that mainstream mentality to WCW and Monday Nitro for a few years in the 1990's, Raw has stood the test of time.

The upcoming 1,000th episode celebration should be memorable, if anything.  Apparently quite an impressive list of past talent is being assembled for the show.  While most will probably only have cameo appearances lasting a few seconds, it's always nice when those stars are remembered.  The 10th Anniversary special of 2003 was sorely lacking in that area in a time when the "Attitude Era" was pretty much the only "past" still being celebrated.  The 1000th episode guest list will also be interesting as to see if there is any "Raw" criteria at all being considered.  Taking into consideration that many of the Legends and other past superstars often used by WWE today had little or nothing to do with Raw, we may see an entirely different group of stars than is the norm.

Whether or not we get to see the cameos that we want, the show will still evoke many Raw memories.  My own personal favorite would be the very first broadcast that I had the opportunity to attend live.  It was July of 1997 and while the "Attitude Era" seeds had definitely been planted, the bloom was not yet in full force.  It was a full event with matches for Shotgun Saturday Night being taped before and after the actual Raw episode.  There was even a dark match main event featuring a triple threat involving three of WWE's biggest stars of all time: The Undertaker, Bret Hart, and Stone Cold Steve Austin.  The episode itself featured the infamous Hart "enema" promo as well as his pinfall loss to The Patriot. 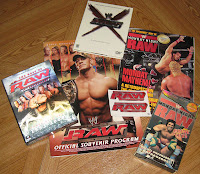 Other memorable Raw moments for me would include the late-1993 Intercontinental Title Battle Royal (and Ramon-Martel "final" the following week), The Price I$ Raw, the return of Lawler and Ric Flair in late-2001, the final wrestling event at the Pittsburgh Civic Arena (Raw 5/10/10), the debut of The Radicalz (also here in Pittsburgh), the subsequent 10-man tag team match involving the Radicalz with a ridiculously hot Dallas crowd, the 2001 Austin/HHH-Benoit/Jericho match, the Eddy Guerrero-Rob Van Dam ladder match...the list goes on and on.

With only a few segments announced for the 1,000th episode, it is anyone's guess what we will see this coming Monday Night.  It's Vince McMahon's variety show, and I'd speculate that with three hours and a plethora of surprises, variety is exactly what we will get.  The question that I have been posing is one that I have wondered if WWE itself has even thought of:  "Do we get to do it all over again in January for the 20th Anniversary?"