PWI: COVERing Wrestling For Over 3 Decades

September 1979 was quite a long time ago.  That is the cover date of the first issue of Pro Wrestling Illustrated.  It's also quite a long time for a product to last on the shelves.  Despite ups and downs in the wrestling industry, not to mention with magazines in general, PWI has stood the test of time.  With the cover being a huge selling point of any periodical, you have to sit back and think that PWI's amazing gallery of cover photos has helped that success.

You would have to think that even in the jaded world of the year 2012, making it to the cover of PWI should still mean something to a wrestler.  Like that first action figure or appearance in a video game, it is definitely a career highlight.  In some cases, wrestlers have never looked better than on the cover of PWI.

The Road Warriors almost always looked intimidating, but possible never more so than on the famous PWI March 1984 cover featuring "the boys" highlighted in "horror-style" lighting.  The infamous Four Horsemen?  Drenched in gold, the elite stable proved that the NWA contained the top heels in the business on the cover of PWI's December 1988 issue.  Even Shawn Michaels has told the story of imitating Ric Flair on the April 1984 cover right before entering the business himself.

Personally, I can't pick just one.  Like all of my other "favorite" things in pro wrestling, I've narrowed it down to a top five list.  With thirty-three years of magazines in the can, it was no easy task.  These are simply the issues that appeal to me the most visually while simultaneously capturing the feel of what professional wrestling is all about. 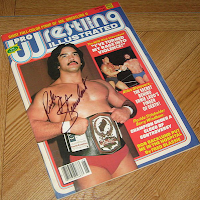 One of the best in one of his early successes.  A vintage wrestling champion pose from one of the greatest wrestling champions of all-time.  And we cannot forget what many of you will undoubtedly point out...Ricky Steamboat with a mustache.  Wrap it all up into one package and you have this cover.  This is the first of several memorable PWI covers featuring Steamboat, but in my opinion the best.

The cover also illustrates the variety of press given to the various regional territories of the time.  Steamboat is wearing my favorite version of the Mid-Atlantic Heavyweight Championship.  Barry Windham is listed as "Florida Titleholder."  Although in just a few years the business would be heading towards national domination, it's interesting to look back and realize that so many fans got their glimpse of a variety of stars solely from publications like PWI. 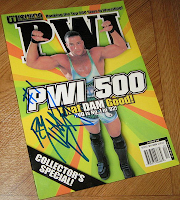 Beginning in 1991, the PWI 500 is the magazine's annual ranking of the top five-hundred wrestlers in the world.  Always controversial, this particular issue is always a great seller as well.  In 2002, it was Rob Van Dam who took the coveted number one position.

Featuring bright colors and RVD in his classic pose, I don't think the number one spot has ever been featured better on a PWI 500 cover.  Tearing up the then-newly rebranded WWE, Van Dam did indeed have a banner 2002 and is continuing to add accolades to his career a decade later.  My only problem with the cover is that this issue was produced during a time when the famous Pro Wrestling Illustrated logo was taking a backseat to the PWI abbreviation.  That wasn't enough to knock it out of my list. 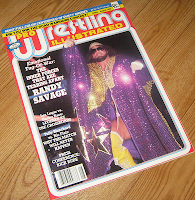 From his high-flying style to his endless wardrobes, The Macho Man may just have been the most visual wrestler of all-time.  In my opinion, this cover may have been the grandest that he ever looked, and that is most definitely saying something.

Entering the ring in purple and gold, Savage is stealing the spotlight as he always did.  The photograph used captured a perfect sparkle to the cape that always made the cover "pop" to me.  The opening video to the "Macho Madness" WWE DVD release had a similar sparkle, but that was video.  This was a simple photo, some luck, and an unforgettable legend. 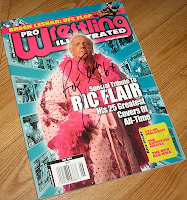 Celebrating a cover where the goal was to celebrate covers.  Just when you thought Flair couldn't have any more iconic PWI covers, we're thrown a curveball.

Around the time of his WWE retirement, PWI highlighted his 25 best covers from their family of magazines.  Clad in a pink feathery robe in front of a collage of his past covers, "The Nature Boy" looks as regal as he did in his entire career.  Stylin' and profilin', indeed. 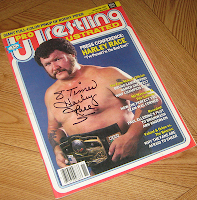 Harley Race and the NWA World Heavyweight Championship.  I really don't have to go any further, but of course I will.

I've gone on and on before about how, to me, Harley Race personifies professional wrestling.  He had the perfect look to be a wrestler, the perfect voice to be a wrestler, and the technique to match it all.  He adapted himself several times to remain relevant in an ever-changing business, but it was undoubtedly his eight times as champion in which he was at the top of his game.  This cover sums it all up perfectly.  Race frequently adds "Best in Sports" to his signature.  A more fitting inscription there never has been. 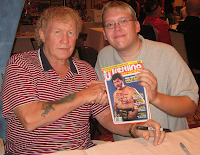 Those are my "five faves."  Everyone will, and should, have their own list.  Whether it be a well-read copy from years past or a newer example suitable for framing, these covers capture wrestling regardless of condition.  And of course you just can't beat having an issue autographed in the cases where it's still able to be done.  I've witnessed countless times where the wrestlers themselves can't take their eyes off of the various items presented in front of them by fans.  Where covers like these are concerned, it's no wonder.
Posted by J\/\/ at 7:00 PM