I admit it.  I love wrestling theme music.  Sure there are those who say that the wrestlers should be introduced, both already in the ring, solely to the tones of boos and cheers.  At times that can still be appropriate to this day, especially in important matches with the in-ring introductions after the music.  But with the pageantry of modern events like WrestleMania and even the weekly televised matches on shows like Raw and Impact, it would seem awfully empty without music.

Wrestling's musical connection didn't really start with theme music.  Like everything else, there was wrestling-related music on vinyl.  I'm not going to go on a diatribe about how "youngsters" today don't know what a vinyl record is.  Many do, but where would we be without the jokes about vinyl being antiquated?  Many music connoisseurs will tell you that a good, clean, unscratched vinyl sounds better than a digital recording any day.  My ears would tend to agree, and thankfully so many great wrestling collectibles are in fact vinyl records!

Arguably the most publicized wrestling musical release is 1985's "The Wrestling Album," a product of the WWF's Rock 'n Wrestling Connection and involving musical talents such as Rick Derringer and Cyndi Lauper.  Airplay on MTV and the aura of the wrestling industry at the time time ensured that the endeavor would be a success.  From the mass-produced main album to many rarer 45 and 12 inch singles, the product reflects wrestling's then-growing trend towards entertainment.  Many of the songs from the album eventually became iconic theme music like JYD's "Grab Them Cakes," Hillbilly Jim's "Don't Go Messin' With A Country Boy," and "Real American" which at the time was intended for Barry Windham and Mike Rotundo's U.S. Express Tag Team.  The song, by Derringer, eventually went to Hulk Hogan.

Even more theme songs and videos came from the WWF's second musical release, "Piledriver."   Almost every song from this album was used as a theme at one point.  Although wrestling's '80s "boom" popularity was beginning to wane, you would be hard pressed to find a fan around the age of 30 that does not remember at least one "Piledriver" track.  The beloved theme songs of Demolition, Slick, The Honky Tonk Man, and Strike Force all came from Piledriver, as did Koko B. Ware reminding us that sometimes love feels just like...a piledriver.

"The Mouth of the South" Jimmy Hart may have had a song on The Wrestling Album, but that is hardly his greatest contribution to music.  A member of '60s rock group "The Gentry's," it was with the group that Hart became involved in professional wrestling.  Both with The Gentry's and wrestlers themselves, Hart wrote and performed several songs involving the talent of Memphis wrestling.  He later wrote countless pieces of music to be used as themes for many WWF and WCW stars.  One of his most played efforts would undoubtedly be "Sexy Boy," the longtime theme music of Shawn Michaels. 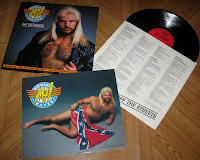 Hart's gimmick largely played into music, but so did that of "Freebird" Michael P.S. Hayes.  Looking like a quintessential '80s rocker, Hayes' album, "Off The Streets," was released in 1987.  This was about a decade after his in-ring debut and just a few years after becoming one of the top heels in the industry.  Hayes and his "Badstreet Band" (the other Freebirds were not musically involved) performed tracks ranging from the Freebirds' "Badstreet U.S.A." anthem to Thin Lizzy's "The Boys Are Back In Town." 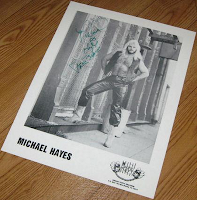 Each album included a "special" photo of Hayes draped in the Confederate flag.  Some of those that pre-ordered the album also received a bonus autographed 8x10 photo due to delays in production and release.  It is also interesting to note that the Freebirds started using "Badstreet U.S.A." as their theme nearly four years before the release of this album.  It is said that Hayes had trouble securing a record deal for the release. 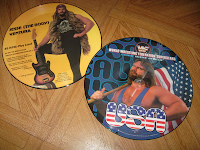 Sometimes even the vinyl itself was visually impressive, as is the case with picture discs.  These releases had photos right on the vinyl.  As visual as pro wrestlers are, it was a perfect marriage.  It seems as if these were more popular outside of the U.S. as many of these releases are foreign.  While picture discs featuring such stars as Hulk Hogan and Stan Hansen were produced in Japan, others originated in the U.K.  A single from the WWF's third full-length album, "WrestleMania: The Album," saw a Hacksaw Jim Duggan 12 inch picture disc release in the United Kingdom. 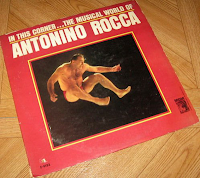 This brings us to the long-debated question, "Who was the first wrestler to use theme music?"  Everyone thinks that they know the answer yet there are various acceptable "right" answers.  We'll never know the truth, however one of the first wrestling-related musical releases starred '50s and '60s wrestler Antonino Rocca and is appropriately titled "In This Corner...The Musical World of Antonino Rocca."  The album is full of Latin songs of various rhythms with a few, such as "Rocca's Theme," specifically tailored to the high-flyer.  A photo of Rocca conducting is shown on the back cover of the album, but I would be willing to bet that it's nothing more than a publicity photo.

This is by no means a comprehensive list of wrestling's musical connection, but rather a sample of what's out there on highly desirable vinyl.  Themes are still available in digital stores like Google Play and iTunes, but nothing beats holding a bunch of vinyl records in your hands, eagerly anticipating the sounds when you spin the next one.  What I'm really trying to say is...you can have you digital download of "Voices."  Cue up some "Jive Soul Bro" on vinyl?  I'm there.
Posted by J\/\/ at 7:00 PM

I've always thought that The Freebirds were one of the first to use enterance music back in World Class when they used a version of Lynard Skynard's Freebird. Michael Hayes was a pioneer with music and wrestling. Why he has'nt been put into the WWE Hall Of Fame yet is beyond me.

They're definitely ones that have the footage to back it up, but there are some that pre-date them. Sadly since it probably started sometime in the '70s we'll never really know.

I don't know what they're waiting for with Hayes, I'd have had The Freebirds in long ago!