The Von Erichs: A Family Album...Revisited 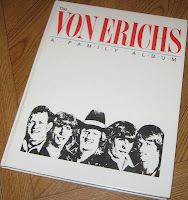 It's hard to mention the Von Erich name to a wrestling fan without eliciting a sorrowful response.  For all of the excitement, happiness, and joy that the family brought to millions around the world, it's fairly obvious that the tragedy has overcome the triumph.

Speculation and talk will go on forever regarding the Von Erich family tragedies.  What was the deep rooted cause?  Who was ultimately to blame?  Could at least one of the deaths been prevented?  We will never know.  It seems as if even the family members themselves couldn't answer those questions.

Regardless, the family did not ignore the deaths publicly.  Many fans remember the melancholy episodes of World Class Championship Wrestling following the deaths of David and Mike.  What is less remembered is a book produced by the family in 1987.  The book is titled "The Von Erichs: A Family Album," and isn't exactly an easy find these days.

When I posted pictures of the book on our Facebook Fanpage, many fans began to recall commercials advertising the book during WCCW broadcasts.  The commercials instruct to viewer to "order in time for Christmas," and this very well may have been the only way that the book was available.

A large, hardcover book, the term "album" was perfectly suited.  Originally costing $13.95, this would easily be a $25-$30 book today.  Credit for text is given to Kirk Dooley with design by Constance Flowers.  The book was published by a company called "Taylor Publishing Co." out of, surprise surprise, Dallas, TX.

What should be no big surprise is that the very first sentence in the book compares the Von Erich family to the Kennedy family.  It's a comparison made by others and, in view of their then-recent tragedies and an obvious effort to be shown in a good light, also a comparison made by the family.

The most striking thing about this book is not the openness (for the era) regarding the Von Erich deaths but rather that the book isn't really about wrestling at all.  Sure, the family built their dynasty around the industry and plenty of photos chronicle the in-ring accomplishments of Fritz, David, Kevin, Kerry, and Mike, but this isn't a wrestling book.  It's a book telling the Adkisson-approved story of the Von Erich clan. 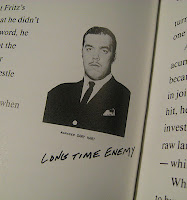 Those looking for a book telling the story of Fritz's Nazi gimmick or his sons battles with The Fabulous Freebirds will be greatly disappointed.  There is no mention of either.  A small, randomly placed photo of Gary Hart labeled as a "long time enemy" is pretty much the only reference to any WCCW storylines.

The book begins telling the story of Jack (Fritz) and wife Doris as they meet, marry, and simultaneously start a family and a life on the road.  While Jack becoming Fritz and his matches are a backdrop, the focus is on the family's beginnings and hardships. 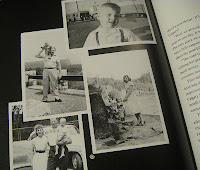 The first tragedy for the family was nearly a quarter of a century before the well-known death of David in Japan.  Six-year-old Jackie Adkisson was electrocuted and drowned in an incident that many fans probably learned of through this book.  It is speculated in the book that Fritz may have been more domineering over his other children because of young Jackie's death, a thought that has been repeated by more than one wrestling fan.

As Fritz's wrestling career grew, so did the clan.  The story of how Dallas became Von Erich territory is included, although no mention of the office being ran by Fritz at any point in time is made.  Again, this is a book about family and not the wrestling business.

Countless photos and stories take us through the childhood and early successes of the sons, with a heavy emphasis on their high school athletic accomplishments.  The amount of coverage in this area makes the reader wonder if Fritz would've rather had his sons go on to greatness in sports other than professional wrestling. 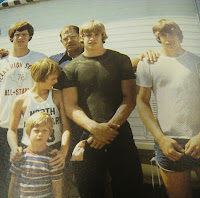 It's at this point that the book provides an interesting conundrum.  While the boys' popularity and "heartthrob" status is noted, it's not nearly emphasized to the point that it is remembered today.  It's often pointed out that all over, but especially in Texas, the Von Erich boys were treated like rock stars.  Is the downplaying of this in the book an attempt to appear humble or another move to push wrestling to the back? 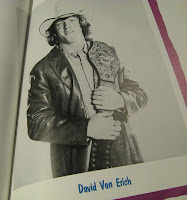 The death of David is mentioned but not dwelled upon.  Mike's death, occuring the year of publication, is the last major event for the family covered in the book.  Pro wrestling does, however, play part in the end of the book.  It is in such a manner that suggests the family may have realized that their dynasty was taking a nose dive.  It is predicted that Kerry and Kevin will go on to become all-time greats as wrestlers while Chris will become a wrestling promoter.  The last thing that I need to do is remind anyone how it all ended up. 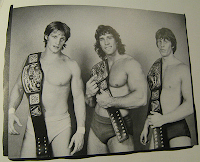 The book is in an interesting read for all fans of the Von Erich family, but especially as a time capsule.  In photos and words it displays how the family wanted to be perceived just around the time that the proverbial "rose colored glasses" were getting foggy.  Business was going down for a multitude of reasons and truths were beginning to surface.  For a student of wrestling history or a collector looking for a treasury of Von Erich photos, you couldn't find a better item. 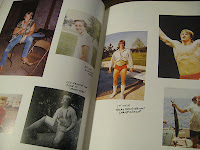 We also must keep in mind that Kevin seems to have found peace in his life.  Retired to Hawaii with his own family and mother Doris, Kevin is indeed the sole survivor.  Although no one wants that title, Kevin has stated that he finds comfort in the memories of his brothers and the closeness that made them a family.  One look at this book is pure evidence of that.
Posted by J\/\/ at 7:00 PM

Thank you for your review and pictures of this book. I am trying to decide whether to spend $100 or more on a used copy, and you are the first person to give me a good idea of what I would be getting. It's been 12 years since you wrote this article, but i, for one, am grateful.

I'm glad it helped and that you enjoyed!