Forget Tickle-Me Elmo, Furby, or even a Cabbage Patch Kid.  One of this years hottest toys is Ryback.  Mr. Feed-Me-More himself.  After all, he is the WWE Universe's answer to Goldberg.  Judging by the traffic to this very blog, people everywhere are scouring the Internet searching for a Ryback figure for Christmas morning.  The problem is...there isn't one.  Well, not yet anyway.  Well, not by the "Ryback" name anyway.

Although a couple of great looking Ryback figures are in Mattel's plans for 2013, they all have yet to be released.  A few weeks back, pictures taken by yours truly of prototypes of the upcoming Ryback figures were seen right here on the blog.  Clad in his signature singlets and with a scowl of destruction on his face, these figures will be ready to dominate any WWE ring...just not this Christmas.  That is unless a parent decides to plunk down a pretty big wad of money for a Skip Sheffield figure.

Under his original WWE ring name of Skip Sheffield, Ryback does indeed have a Mattel-produced action figure.  Hitting shelves around the summer of 2011, the Sheffield figure was in Mattel's WWE Basic Series 11.  The series also included the "rookie" figures of Daniel Bryan and Eve Torres.  "Rookie" figures don't usually attain any sort of extra value based on being a debut figure.  The Sheffield figure was probably the easiest to find of the bunch.  He was also the easiest to obtain of any of the original member figures of rookie super group The Nexus.

With the WWE Universe getting more and more behind the monster known as Ryback, secondary market price for the Sheffield figure has begun to rise...fast.  Between fans who previously snubbed the figure that are now suddenly wanting it as well as holiday gift giving time approaching, it's a bit easier to understand the demand.  Little Jim...err...Johnny may want a Ryback, but is paying $80 and up really worth it? 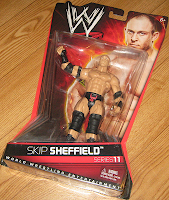 This was one of the final Mattel series to be released with their initial basic packaging design.  It wasn't my favorite wrestling figure packaging style of all-time, but it wasn't the worst either.  The basic figures are just that: basic.  While some of the more recent basic Diva figures have included removable apparel pieces, most have absolutely no accessories.  The future Ryback includes nothing but the figure itself.  Had the Skip Sheffield character lasted, a more detailed Elite figure could possible have been produced, complete with the "Corn-fed Meathead's" cowboy hat and vest.  This was not to be the case. 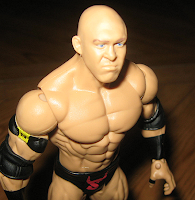 The body is a standard muscular body that has been reused in the basic line.  The head and facial likeness look to me to have repainted for the Ryback prototypes.  It's a great likeness, but I'm sure with the popularity of Ryback that we will see different expressions down the line.  The Sheffield figure does have the Nexus armband present, although that doesn't seem to have driven up the value of any of the other initial Nexus figure offerings. 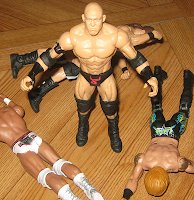 My feeling is that desperate parents are driving the demand up for this figure.  True collectors should know better for a multitude of reasons.  As I mentioned above, rookie figures rarely carry any extra value.  Many "actual" Ryback figures are on their way.  After the initial panic dies down, Ryback figures will be as common as John Cena based on Mattel's desire to overproduce the top characters.  At that time, the Sheffield figure will again be selling for $15, if that.  If Ryback's popularity continues, don't be surprised to see a "Flashback" Skip Sheffield figure coming your way.

The verdict?  Wait.  Ryback is coming...with a vengeance.  But what if you're a parent who has a child that won't speak to you unless a Ryback figure is under his or her tree?  What can I do but offer some simple parenting advice?  Feed them more...soap.
Posted by J\/\/ at 7:00 PM