It feels like only yesterday that I was writing about the 2011 J\/\/ Awards.  A fun way to end the calendar year, the awards are chosen by a strict committee--myself.  The same committee also decides the look of the "Joshie" award which has changed each year since its inception.  While the coveted trophy has appeared "classy" and "immortal" in the past, this year the committee decided to get the "attention" of you "maggots," but I'd really like you to be "at ease" while taking in all of the awards.

With all of the cliches aside, it's time to get to the awards themselves.  Although tweaked after the first year, I think that the five categories are now firmly established and shall be for years to come.  A few surprises?  A few upsets?  A little bit of bias?  Of course!  That's why they're the J\/\/ Awards!

The most controversial J\/\/ Award is always Best Figure.  Although the list of companies from which the figures are licensed is shorter than ever, the quality of product is still very high.  Uniqueness is as big of a deciding factor here as design. 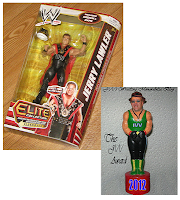 Mattel's WWE Elite Jerry "The King" Lawler wins "The Joshie" for 2012 Best Figure.  Seeing as that I was not a fan of the initial prototype pictures, this could be considered somewhat of an upset.  The figure, just released in the past several weeks, is a perfect blend of design.  The figure captures "The King" in his WrestleMania XXVII attire, a look that already blended the Lawler of yesterday and today.  This is the first Mattel representation of Lawler and is part of their Elite line which comes packaged in a very attractive "window" box.  Add it all up and you can only come to one verdict: "Long Live The King!"

A lot can fall into this category.  Books.  Magazines.  Pamphlets (yes, Tito Santana, I'm looking at you).  If it's printed material about wrestling, it's up for consideration. 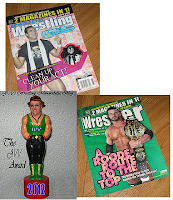 Inside Wrestling/The Wrestler Magazine wins "The Joshie" for 2012 Best Publication.  The award becomes more of a "Lifetime Achievement" this year as 2012 is sadly the final full year for the publication.  Beginning as individual titles more than forty years ago, countless fans grew up quenching their thirst for the sport of wrestling through these magazines.  Bloody covers, top ten ratings, and several generations of professional wrestlers made these titles unforgettable for almost six decades.

What in the world of wrestling gave fans the most bang for their buck?  In 2012 that buck had to be stretched further than ever.  The best result from that is what we're looking at here. 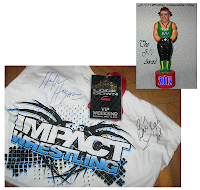 The 2012 TNA Lockdown Fanfest wins "The Joshie" for 2012 Best Buy.  Autographs and photo ops from dozens of Impact Wrestling's greatest, not to mention the two biggest names in wrestling history, all for around $200?  Sold.  Hogan.  Flair.  Angle.  Hardy.  RVD.  Roode.  Storm.  Bully Ray.  Devon.  I could go on.  TNA truly knows how to put on a "Meet & Greet."  For those of you familiar with the world of fanfests and conventions, you know that the value is phenomenal.  The only competitor for this year's award would've been a 2012 version of Greg Price's annual Legends Fanfest.  Sadly, this year's version was canceled, but I'm sure the 2013 edition in Charlotte will make next year's running.

Anything that has continual releases throughout the year can be considered here.  That being said, I can see the most repeat wins taking place in this category in the future. 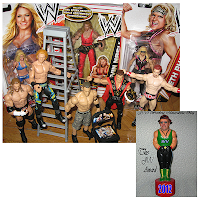 Mattel wins "The Joshie" for 2012 Best Product Line.  This perhaps could be the biggest surprise for frequent readers as I'm often very critical of Mattel's handling of the WWE license.  Not everything that they do pleases me, although it isn't always their fault.  Other issues such as distribution most certainly are.  When looking at 2012 as a whole, Mattel has put out some pretty impressive product.  From creating a very appealing new package design template that was rolled out line-wide to some fun and unique exclusives such as Build-A-Figure, the Mattel/WWE tag team had a helluva year.  Seeing some of the product that will be hitting in the first quarter of next year, Mattel may capture yet another "Joshie" to match their 2010 and 2012 wins.

This is the item or line that people will be enjoying for years to come.  Wrestling memorabilia from this year that will stand the test of time... 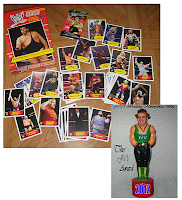 Topps WWE Heritage 2012 Trading Cards win "The Joshie" for 2012 Future Holy Grail.  I've been talking about this set for months and when it finally hit my hands, I was more than impressed.  Nearly everything here blew me away, and I'm not the only collector who felt that way.  I've already put together several base sets and yet I still find myself tempted to pick up more packs for subsets and hits.  I'm addicted, and I think that feeling will carry on for years over this set.  I will admit that this is one "Holy Grail" award that I'd like to be proven wrong about.  If Topps can come up with another Heritage set in the future that would top this, I'm all for it.

The envelopes are open.  The world now knows just what the gold in wrestling memorabilia was for 2012.  Agree?  Disagree?  "Like" our Facebook Fanpage and send some feedback!  You can also see every J\/\/ Award winner from each year in a special gallery!

It's been a fast paced and fun year.  Thank you all for reading, enjoying, and maybe even learning over the past twelve months.  We'll be back next week for the final entry of the year, but until then... 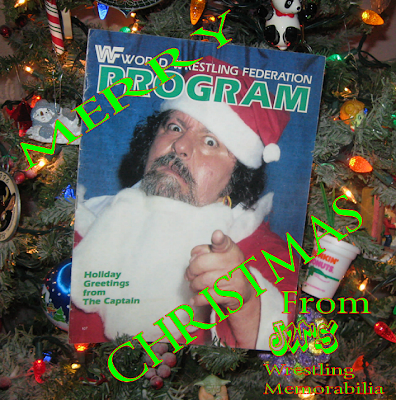