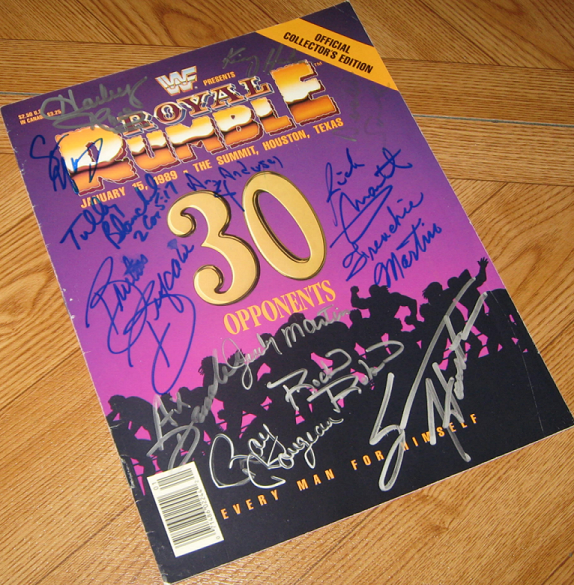 The first major wrestling anniversary in 2014 is absolutely "Royal."  Although the first Royal Rumble was held in 1988, it was not until 1989 that the event became a pay-per-view event.  Thus, 2014 is the 25th anniversary of the Rumble on pay-per-view.  Being the brainchild of Pat Patterson, the Rumble match itself can trace its roots to San Francisco.  For many years, the Roy Shire wrestling promotion on the west coast held a January battle royal that featured wrestlers from around the world.  Patterson spent a lot of time in the promotion and those battle royals, even going on to win several.  Fast forwarding a decade, we find Patterson as one of the top creative minds of the business and creating the Royal Rumble for the WWF.

On January 15, 1989, the Rumble made its pay-per-view debut.  Emanating from The Summit in Houston, Texas (now home megachurch to televangelist Joel Osteen), the pay-per-view seemed to be almost experimental in nature.  In addition to the Royal Rumble match itself, the show hosted a variety of events that were not normally part of the WWF's offerings at the time.

The program for the event is yet another that featured both the Rumble lineup itself as well as portions from the standard WWF program of the time.  These pages featured articles on recent happenings in the WWF, spotlights on talent, and of course the great color photography that the WWF publications were becoming known for.  Early in the program we're treated to a photo from  a then-recent Saturday Night's Main Event match.  Mr. Fuji had hired a masked assassin named Super Ninja to take out the Ultimate Warrior.  Though the match didn't last very long, the masked man was none other than Rip Oliver.  I know that I'm not the only fan who misses when this sort of wrestling randomness was commonplace. 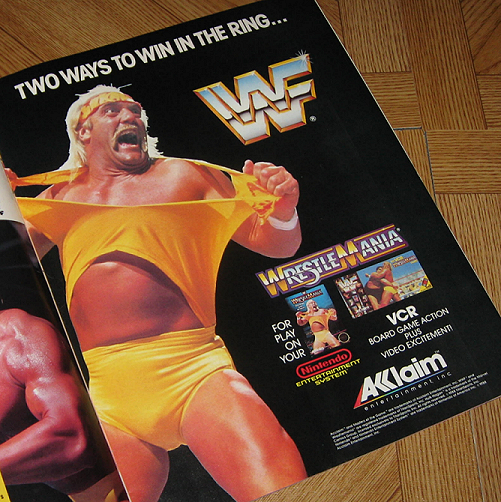 Move over WWE 2K14!  As with many of the magazine's from that era, we're shown a full page ad for Acclaim's WWF VCR game and WrestleMania game for Nintendo.  Fans have many memories of this, the first licensed NES wrestling game, that featured Hulk Hogan, Bam Bam Bigelow, and The Honky Tonk Man among others.  Game play may have been limited and some of the design was questionable to say the least (Ted DiBiase using "Girls In Cars," bouncing "power-up" logos), but for the time it was an after-school ritual for tons of young wrestling fans.

In the program, it's the Royal Rumble match itself that comes first.  This is the Rumble where Ax and Smash of Demolition are the first two competitors and go at it much to the delight of the crowd.  There are many great moments in this Rumble, until the point where both Hogan and then-WWF Champion Randy "Macho Man" Savage are both eliminated.  The spot is integral to the growing explosion of the "Mega Powers," but the crowd simply does not buy Brutus Beefcake, Akeem, Ted DiBiase, and Big John Studd as the biggest names of the second half.

The opening match was a six-man tag team encounter that featured Hacksaw Jim Duggan and The Hart Foundation against Dino Bravo and the Fabulous Rougeau Brothers.  The match was two-out-of-three falls and featured both a past and future Rumble winner, Duggan and Bret Hart respectively, on the winning team.  It would be interesting to know why the company chose these six to not be in the Rumble match itself.  Duggan chasing a second Rumble win could have been built upon, but for a few years, the 1988 Rumble was largely forgotten in WWF lore.  The VHS video release that was supposed to feature that first Rumble, a Coliseum Video titled "Battle Royal," ultimately ended up canceled.

The next two events of the show are where the Rumble strays from normal territory.  First up is a "Super Posedown" that featured then-Intercontinental Champion The Ultimate Warrior against Ravishing Rick Rude.  This was obviously done to set up the WrestleMania V match, but I'm not the only fan who would have rather seen a short "teaser" match here instead of a posedown.  Notably, Nick Bockwinkel makes an appearance as a WWF agent and even feels a bit of the power of the Warrior. 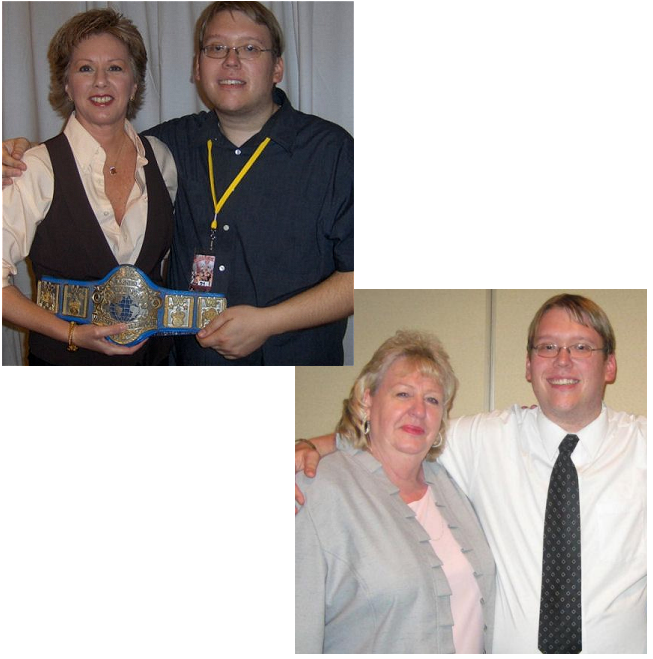 The 1989 Rumble also featured the first singles women's pay-per-view match since WrestleMania 2.  Then-champion Rockin' Robin defended her championship against Judy Martin.  Both of these great competitors have fondly recalled their 1989 run to me, as it lasted nearly six months.  The match is also fun just for listening to the banter between Gorilla Monsoon, Jesse Ventura, and guest commentator "Sensational" Sherri Martel.  Martel had just lost the women's title to Robin and challenged the winner of this match. 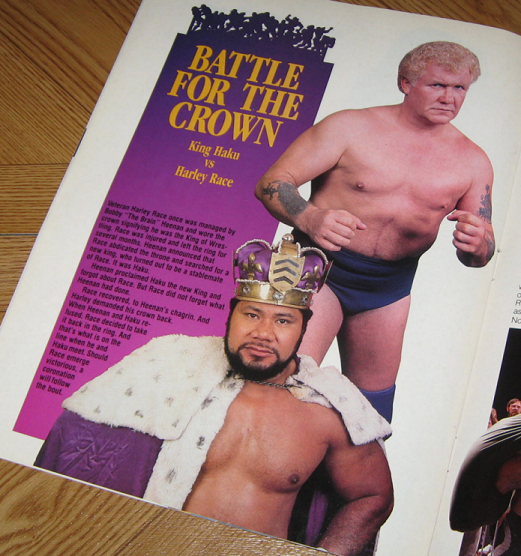 Last but not least, we have my favorite match of the event.  Two of my favorites, Harley Race and Haku, collide in what was billed as a "King's Crown" match.  Race had been "The King" of the WWF until being injured going through a ringside table.  Haku was then "crowned" by Bobby Heenan which Race took offense to upon his return.  The match is under five minutes, but features nonstop action from both men and a humorous performance by Heenan who continuously switches sides depending on who has the in-ring advantage.  This match was omitted from the Coliseum Video release, but thankfully lives on in the WWE Home Video Royal Rumble Complete Anthology.  On the program photo of Race you are able to see the stomach scar that was a result of his surgery from the injury.

Near the end of the program is a two-page ad for an item that was perhaps even more iconic than the NES WrestleMania game: the WWF ice cream bar.  I'm sure that many attendees of the 1989 Rumble snacked on those slams of sweetness.  In repeating a plea from a certain WWE superstar a few years ago, I wish that they would return.  Why not at the 2014 Royal Rumble?  An event that has become steeped in surprise returns might just be the time and the place.  Thousands of Pittsburgh wrestling fans, including myself, cannot wait to take our seats for the most exciting pay-per-view of the year.  WWE, it's a great year for some major surprise entrants...brother!
Posted by J\/\/ at 7:00 PM

Awesome read. That event in the Summit was my first WWF event ever. Never saw Studd winning it l. Are you selling this program by any chance??

Hi Bryan! That's awesome that you were there! Check eBay as it isn't one of the harder to find programs and pops up now and then.