You may recall that I wasn't exactly pleased with the last series of TNA trading cards from Tristar.  The design and feel all seemed very rehashed.  To be fair, it's a rut that the Topps WWE trading cards have fell into more than once, so in no way is the blandness confined to one company.  Around the time that I reviewed that set, Tristar announced that their next set, TNA Glory, would contain "On-Card" autographs.  For many collectors, especially those focused exclusively on cards, this was great news.

Most autographed cards from the majority of sports and manufacturers in the past decade or so have utilized stickers.  The talents autograph the clear stickers which are later attached to the cards by the manufacturer.  It's an easier way for the cards to be autographed by stars who are often hard to pin down.  I prefer obtaining my own autographs, but many card collectors will only accept the signed cards that are inserted into the packs and boxes into their collections.  Although it takes a great deal of the personal feel out of collecting, it's still a lot of fun to pull these cards. 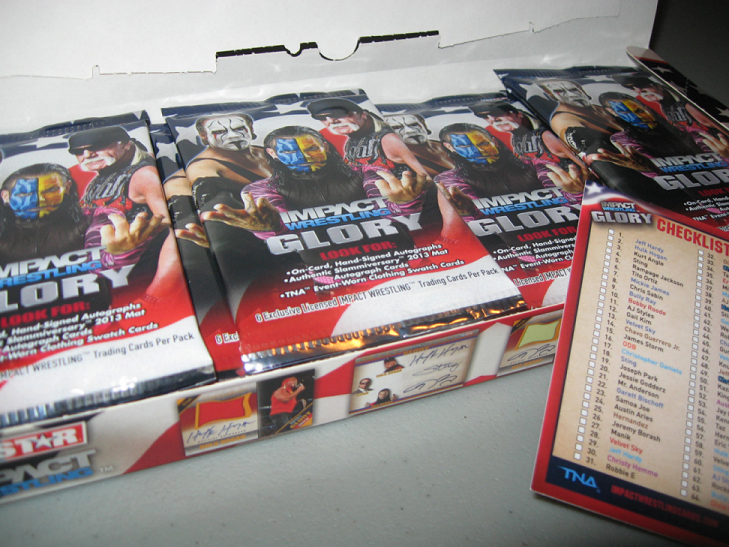 With each Tristar TNA product, retailers that actually sell the cards seem to grow fewer and fewer.  Target and many local card dealers do not carry the line anymore despite still being listed on the Tristar site.  For most collectors, buying a hobby box has become the best way to collect the new TNA sets.  With the past few sets, buying a box has insured that you will collect a full base set of cards and obtain a number of "hits" that include various forms of autograph, limited, and relic cards.

TNA Glory once again promises greatness right on the box.  3 autographed cards are guaranteed, with at least one promised to be one of the new "On-Card" autographs and another card featuring multiple signatures.  Also promised is an authentic Slammiversary 2013 autographed ring mat card or a TNA event-worn clothing card.  I think anyone would prefer the autographed mat in this instance.

Unlike last time where my pulls were rather lackluster, I was pleasantly surprised.  While it didn't compare to my Hulk Hogan and Sting pulls of the past, anytime you end up with five autographs from a box, it's a good day.  Especially when four of those autographs are from female stars.  The female autographs will almost always be more desired by collectors in the same respect that ex-Knockouts and Divas always do well on the autograph convention circuit.  Whether it's a matter of taste or a sign of some lonely days and nights on the behalf of the collectors, I'll leave for you to decide.

The on-card autographs really do look nice, especially since a blank area was left on the card for the star to sign.  James Storm and Christy Hemme are a good, middle-of-the-road, pair of on-cards to pull, and definitely trump what could've been...see Rockstar Spud.  The double autograph, a dual signed card of Gail Kim and Velvet Sky, is another one that any fan would be pleased with.  These autographs also feature different color foil designs.  Some collectors have been known to try and track down all of one color for sets.

My favorite pull is the Slammiversary 2013 autographed ring mat card.  Taryn Terrell, formerly WWE Diva Tiffany, was the signature and photo on my particular pull.  The card is very thick, and features a large piece of mat to fit the full signature on.  Seeing as that Terrell defeated Gail Kim in a highly touted match that evening makes the card all the cooler.  It certainly beats the days when relics would be inserted into a card and have little or nothing to do with the talent depicted.

The base set consists of 99 cards.  I'm a much bigger fan of this design than the previous set, and the All-American colors remind me very much of what a Great American Bash trading card set may have looked like.  Hogan, Sting, Jeff Hardy, AJ Styles, Kurt Angle, and the Knockouts are all here, as are King Mo, Rampage Jackson, and Tito Ortiz.  The final ten cards are Jeff Hardy art cards that form a mural of sorts when put together.  If Hardy's "Imag-i-nation" gimmick of the past is your thing, these are the cards for you.  The old Topps "sticker back" puzzle pieces these are not.

As always there are countless color parallels as mentioned above as well as other limited cards such as Sam Shaw-drawn caricatures.  Also as mentioned above, you once again pull a full 99 card base set among the twenty packs in the box.  This is a really nice feature that makes buying a box all the more worth it.  A base set itself will usually set a collector back between $15-$20, so in general it's more economical to just buy a box. 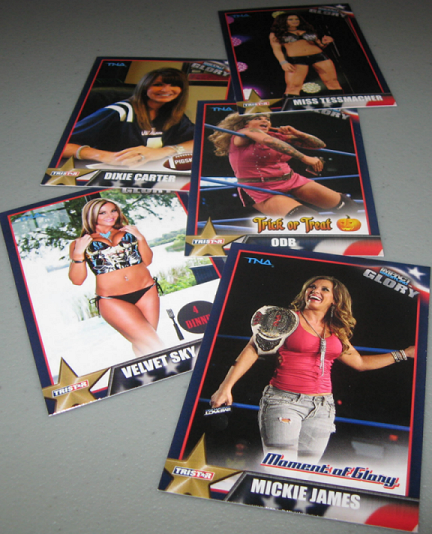 I'm much more satisfied with Glory than I was with Live.  I'll admit that it's partially because I obtained better hits this time around, but the fact that there were better guaranteed hits to begin with helped as well.  The design and photo choices are also a factor.  I am concerned for future releases due to changes in TNA.  With Hogan and Sting no longer in the company, the desirability of buying boxes for hits is going to diminish greatly.  Any autograph is nice to have, but the rest of the roster is extremely accessible for autographs in person.  Only the card collectors that demand "authentic" autographs are really going to want endless Bobby Roode autograph hits, and even those collectors are often driven by value.  Hogan and Sting were the reasons for the high secondary market prices of TNA autograph cards that Tristar so often brags about in press materials.  With those two legends gone, it's hard to predict the future of TNA trading cards.  "Cut" autographs of wrestling legends that are purchased by the company and inserted into cards is one avenue that could be explored, but that's purely my own idea.  As with most things TNA-related in 2014, time will tell...
Posted by J\/\/ at 7:00 PM