Topps Carries Their WWE Run Into 2014 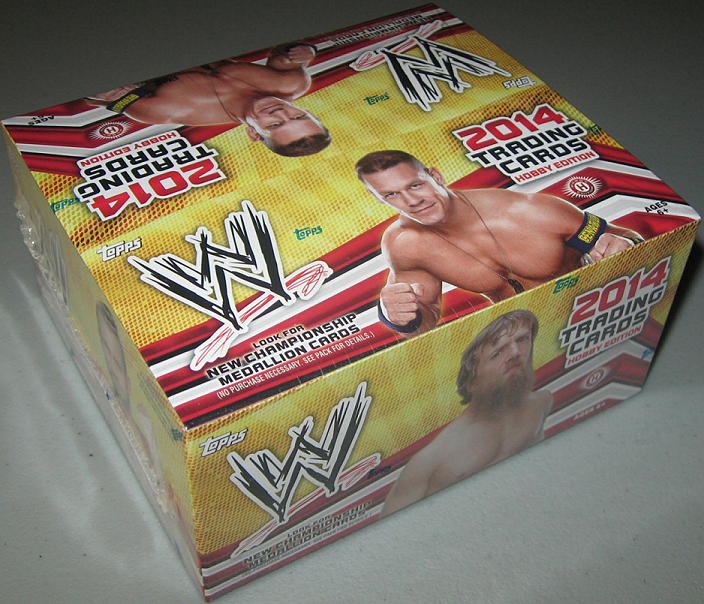 After the "Glory" of last week, Topps and their WWE product get some equal time under the bright lights of the blog.  Putting out an average of two sets a year, Topps has had ups and downs with their WWE card series.  Reuse of photos, little variation in design, and a feeling that the company has gotten complacent at times with their WWE product hasn't always helped propel the cards to the tops of collectors lists.  Looking at the box where not much more than the color has been changed doesn't bode well, but let's take a look inside.

WWE 2014 is the first trading card offering of the year from Topps.  A 110-card base set is accompanied by several subsets, base card parallels, and, of course, tons of hits.  From autographs to relics to new championship plate cards, there are tons of hits to hunt for as is usually the case.  The autograph list is rather unremarkable this time around, with Shawn Michaels and John Cena probably being the most desirable.

Opening a hobby box ensures two hits.  Guaranteed are one event-worn relic and one card from one of four categories: autograph, Diva kiss card, championship plate card, or mat relic.  The mat relic cards are the least desirable of these.  They're long overdone in the wrestling trading card world, but are the easiest to produce.  The mat was changed in between each match at WrestleMania 29.  I saw "cleanliness" as a reason given as to why it was done.  I guess the WWE Superstars are allowed to perform dirty at every other show.  The WrestleMania 29 mat relic cards from the previous Topps set is proof positive.

I was lucky enough to pull one of the new championship plate cards.  One of thirty different stars or teams are featured, along with three inset plates of the current representation of the championship that the wrestler(s) held.  With the recent controversy surrounding the "Straight Edge Superstar," there may have been no better plate to pull than that of CM Punk's.  The plates are more than just gold etched foil.  They're what you might see a medallion produced from, and I wouldn't mind seeing more of these cards in the future.

The 110-card base set is full of just about every current WWE superstar that you can think of.  In fact, I think that just a bit too many members of the roster were included.  Jim Ross is said to have written the card backs, and even Good 'Ol J.R. seemed to struggle to think of a few sentences for a number of these stars.  The world really did not need yet another Curt Hawkins or Rosa Mendes card.  The final fifteen cards of the set are Legends, and it's nice to see names like Larry Zbyszko, Diamond Dallas Page, and the Honky Tonk Man in the set. 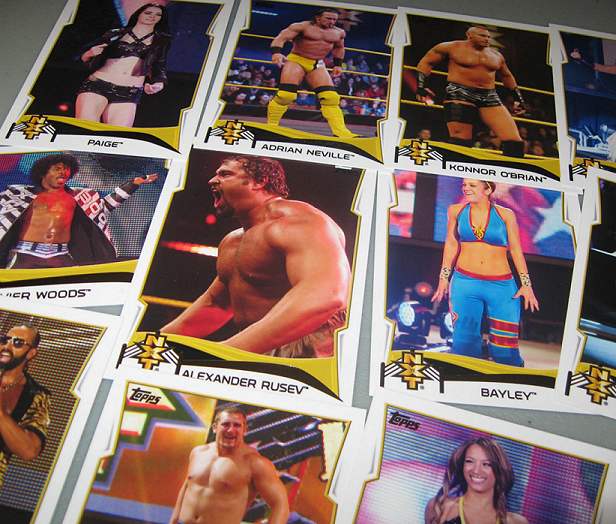 My favorite subset is made up of twenty cards dedicated to the young talent of NXT.  Names already familiar to the WWE Universe such as Emma, Alexander Rusev, and Adrian Neville (especially after his showing on WWE Network's NXT ArRival) are included as are future names such as Bayley, Konnor O'Brien, and Mojo Rawley.  Interestingly enough, Xavier Woods, who has been on the main WWE roster for a few months now, is featured in the NXT subset while Bo Dallas is in the base WWE set.  Dallas has not been seen outside of NXT since the 2013 Royal Rumble. 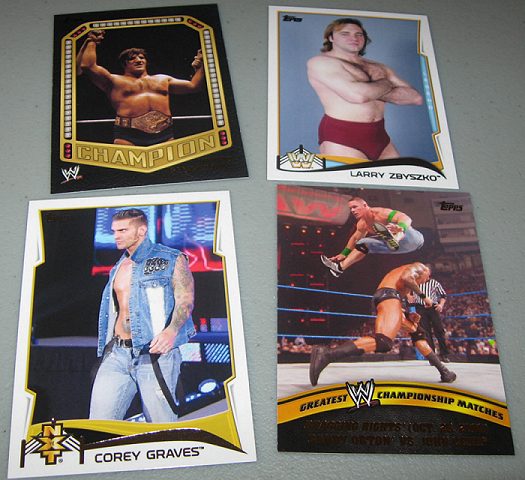 Other subsets include WWE Champions, Greatest Contenders, and Greatest Championship Matches.  These cards feature some great shots of past and present superstars and events, including another new Bruno Sammartino card.  In fact, this set struck a special place in my heart with several generations of Pittsburgh wrestling included.  In addition to the aforementioned Zbyszko and Sammartino cards, a Bragging Rights 2009 card (the final pay-per-view held in the Pittsburgh Civic Arena) and a rookie card of NXT star Corey Graves (Pittsburgh's Sterling James Keenan) are also here to represent the Steel City. 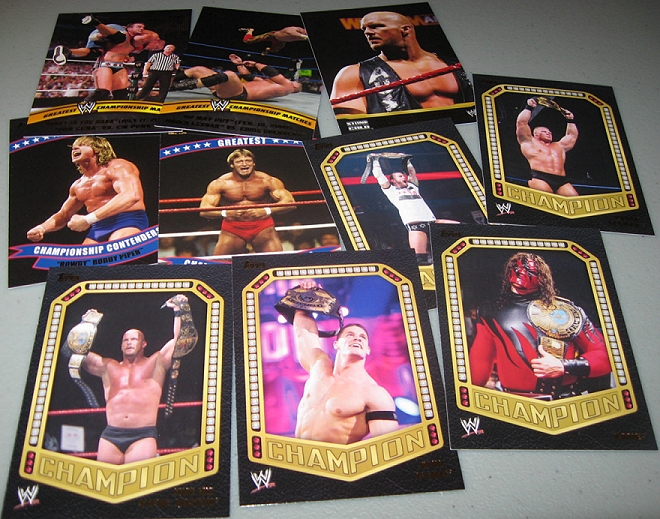 Overall, I'm pleased with this set.  You could have skipped every set since WWE Heritage 2012 (my all-time favorite Topps set) and not missed much.  A nice design (the same as that of Topps 2014 sports sets), some new rookies, and Legends new to the Topps collection are definite highlights.  I was even able to complete a 110-card base set from one single hobby box.  That being said, I'd have preferred another non-gloss set this time around, but there's time for that.  A Chrome version of this set is coming in June, which is my least favorite type of card, but that means that there will be at least one more set of product coming in 2014.  WWE Heritage 2014?  Based off of the 1987 Topps WWF design?  Let's do it.

Oh yeah, each hobby box does include two hits.  What was my other hit?  Well.  No "Glory" days here, that's for sure... 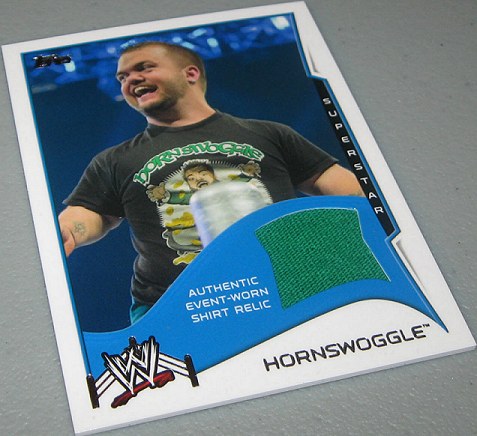 Awesome! Thanks for sharing.