We've been through it before. "First Time In The Line," "Diva," and a cool accessory can be a recipe for disaster as far as finding a Mattel WWE Elite figure. Although the higher priced Elite figures never seem to be quite as challenging to find as "hot" figures in the Basic series, occasionally distribution and other factors can figure into it. So far, the hottest WWE figure of 2015 has proven to be the equally hot-looking Paige. The 22-year-old Diva made her impact on the independent scene, NXT, and has now taken the main WWE roster by storm in the past year.

Paige joins the Mattel WWE line as part of the Elite 34 series. It's a Helluva set, with "modern" Hulk Hogan, Rusev and Doink the Clown all making their Elite figure debuts. As I always note, the Elite female figures are built the same as the Basic Divas, although they include accessories. Those accessories are likely part of the popularity of the Paige figure, but we'll get to that.

Mattel seems to have gone all out with the design of Paige. In addition to many newly sculpted costume parts, I do believe that the midriff part is new with this figure. The outfit design is "classic" Paige and matches the image of her on the box as is usually the case with Mattel. I'm glad that a dark purple outfit was chosen rather than basic black. The detail on the studded belt really pops out and almost appears as if it's a separate piece. The skin tone is as white and almost porcelain as the real Paige, and it wouldn't have been acceptable any other way. 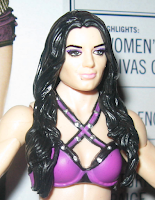 As far as the facial likeness, there is no doubt that this is Paige. From the cleft in her chin to the lip piercing to those dark eyes, Paige certainly transferred well into figure form. I had never before paid attention to the fact that she has an interesting hair style. As far as this figure goes, her hair is only long on the sides with it cut to her neckline in the back. Her hair flails around so much in matches that I wouldn't have noticed this, but it is a unique style to be sure unless Mattel took some creative license.

As I mentioned, Paige is packaged with some unique accessories. For only the second time in the Mattel line we are treated to a chromed and painted WWE Divas Championship. Previously only available with the Elite Kelly Kelly figure from a few years ago, the belt looks better with Paige holding it. It appears bulky around her waist due to the design of it and her own studded belt that is part of her attire. Also included is the NXT Women's Championship. This belt actually looks better than the real deal. The NXT Championships are rather basic looking. This is likely intentional since the original idea of NXT was, of course, to be a developmental territory that accentuated the basics. It's nice and shiny, but again looks a bit bulky around the waist of Paige. 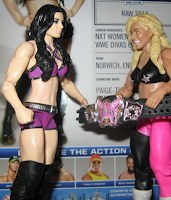 While not my early runner-up for "Figure of the Year" (that vote would go to her Elite Series-mate Rusev), it's definitely a solid figure. It's also definitely a hot figure right now, but unless you want the "First Time In The Line" figure of Paige, you could honestly wait. Paige is probably the most popular Diva in the company with no signs of stopping. Unlike many of the Mattel Diva figures, we can safely predict that this will not be the last of Paige. She will see more releases, and I wouldn't be shocked to see another Elite release featuring Paige in her jacket down the line. As for the NXT Women's Championship, I would imagine that it will make another appearance a bit further down the line. Mattel isn't going to tool an accessory for one single release. It would certainly make a great accessory for a Charlotte figure in the future.

The former Britani Knight makes for a great action figure. Her unique look sets her away from the stereotypical blonde WWE Diva. That, in addition to loads of charisma and great in-ring skills, make me hope that she sticks with the business for the long haul. It's in her blood, and you can't get more devoted than that.
Posted by J\/\/ at 7:00 PM