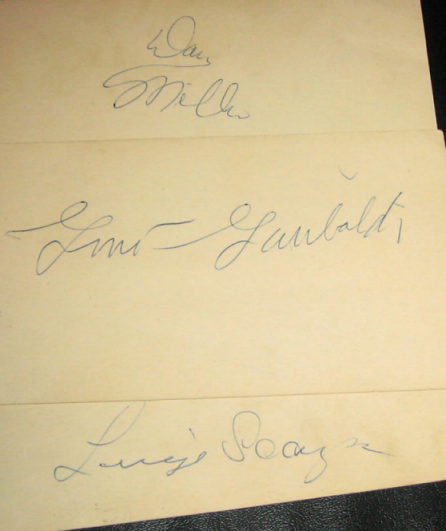 It takes all kinds of collectors to make the world go 'round, and autograph hounds are no different. Some absolutely have to have everything signed right in front of them. Others may not have that option and, instead, buy their autographed items. Most, from my experience, seem to be a mix of both. While I do obtain most of my autographs in person, there are times when you see an item that you know to be authentically signed and just cannot pass it up. In other instances, the star has passed on and purchasing that signature is the sole way to add it to the collection.

A number of years back, I stumbled upon a small, inexpensive collection of vintage 2 cent postcards signed by various wrestlers. The original owner had obtained them as a child at matches not far from his home in Jersey City, NJ. He explained that there really wasn't anything else at the time to get signed, so he had these postcards autographed.

Like that collector from yesteryear, I similarly enjoy obtaining a signature on a blank index card when I'm able to. Although it's always nice to have items tailored to the wrestlers themselves signed, an autograph can often truly "pop" all by itself with a blank background. He was not the only collector from his era to do so, and many rare and classic signatures from all levels of celebrity can be found this way.

Before acquiring the lot, one signature jumped out at me above the rest. I gladly would have paid the nominal amount (around $10) that I paid for the whole lot just for this one autograph, but we'll get to that one in a bit. The cards themselves are a bit discolored with age, but the autographs are as crisp as the day that they were signed. Before the age of the Sharpie, ballpoint pen was king. I've occasionally had more modern day wrestlers sign letters in ballpoint, which adds an "old school" feel to the signature.

This vintage lot included twelve signatures spread out over eight different post cards. Some signed on one side, a few on the other, while a couple wrote on the same card in different directions. Autographs on cards like these are how modern trading card "cut signature" inserts are often produced. You didn't think that Benjamin Franklin, Jesse Owens, and Lucille Ball actually knew that those cards would be on the market in the future, did you?

Names such as Gino Garibaldi, Luigi Scarpa, Len Rossi, Dan Miller, Aldo Venturi, Ted Lewin, and Jose Miguel Perez are a few of the recognizable names included. Many of these stars wrestled for Capitol Wrestling, which of course was promoted by Vincent J. McMahon and eventually became what we now know as WWE. Given that these were obtained in the New Jersey area, it's not much of a stretch to picture the original owner obtaining them just as he had said.

One name included that didn't immediately ring a bell was Gene DuBuque. Upon further research, it seems that Mr. DuBuque actually achieved some fame under another name a bit later in his career, Magnificent Maurice. Under the latter name, DuBuque did one of the original "effeminate" gimmicks in pro wrestling, paving the way for stars like "Exotic" Adrian Street, "Adorable" Adrian Adonis, and Goldust. His pompous smirk and well-built physique only helped the heel image of the character. Sadly, DuBuque's life was cut short in a 1974 plane crash. 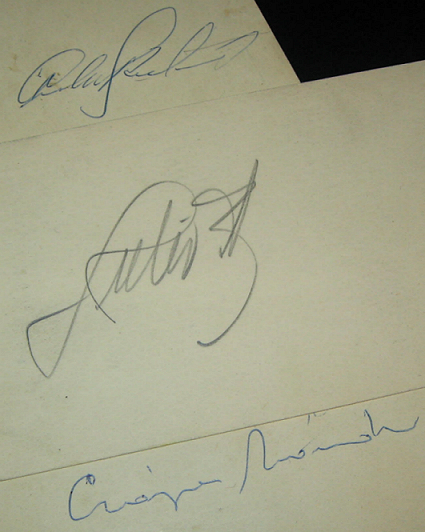 There are three autographs from the collection that I still have not been able to identify. One has always seemed to me that it might be a foreign star, as the writing certainly looks like it may be in another language. The other two are very much like signatures of yesteryear, with distinct styles and flares. I'm sure that one day, browsing wrestling autographs from the past, I'll recognize the same signatures from this collection and finally be able to identify them. If you think that you recognize these three autographs, feel free to drop me a line! That top one sure does look familiar.

Last but not least is the aforementioned signature that drew my interest into the lot. While very little footage of the man seems to exist, he is actually still among the living. He is the former manager of "Nature Boy" Buddy Rogers, the one and only Bobby Davis. Those who saw his work say that he was one of the greatest wrestling managers of all-time. Various stories of his post-wrestling years have surfaced, with the most circulated being that he invested well in fast food restaurants. To my knowledge, his last wrestling-related appearances were in an Entertainment Tonight piece on the death of Adrian Adonis in 1988 and at the 1994 WWF Hall of Fame ceremony where Rogers was posthumously inducted. A picture of Davis at that event even appeared in WWF Magazine.

As a heel, Davis likely did not sign too many autographs. With him seemingly wanting to distance himself from wrestling, he does not likely sign many today, either. Although the rarity factor is there, the coolness doesn't end with it. As opposed to "floating" in some portion of the card, Davis takes up the whole thing. A very characteristic "Lotsa Luck" inscription was even added and tops off the bold signature that conveys the "brash and arrogant" character that Bobby Davis was said to bring to the ring.

This little collection is probably one of hundreds of thousands of similar sets of relics. Many have stumbled their way into the hands of collectors who, like myself, will save them for posterity. Others have yet to be found, still waiting in attics and basements waiting to be rediscovered. Who knows what all is out there? It's up to us, the passionate preservationists of the squared circle, to rescue them.
Posted by J\/\/ at 7:00 PM