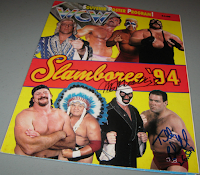 In his various creative tenures, "The American Dream" Dusty Rhodes had some great ideas. War Games, Starrcade, and BattleBowl are just a few of the famous concepts to come from the mind of the Austin, Texas-born legend. Another came in 1993, just as Dusty himself was moving into retirement from action between the ropes. The event would be a WCW card interspersed with appearances and even matches showcasing the stars of yesteryear. This event would become known as Slamboree.

Newer fans may not realize it, but for many years WCW was the only major company to recognize the history of the business. From roughly after the end of Tuesday Night Titans (where history was often discussed) until the late 1990's, the WWF went to great pains not to acknowledge anything outside of its own umbrella. When a talent left the company, they were no longer mentioned. Period. WCW was different, and this show was proof of it. The company was happy to acknowledge its roots in both Mid-Atlantic and Georgia Championship Wrestling as well as its former stars.

The event lasted from 1993 to 2000, but it was the first three years that were something special. In addition to legends appearances, the WCW Hall of Fame ceremonies hosted by Gordon Solie were held at Slamboree. Matches such as Dory Funk Jr. vs Nick Bockwinkel, Terry Funk vs Tully Blanchard, and Dick Murdoch vs Wahoo McDaniel were among the legends bouts held over those first three years of Slamboree to accompany the stellar WCW roster of the time. Be sure to check these shows out on WWE Network as opposed to the Turner Home Video releases. The latter cut many matches and fun moments, such as the "Fabulous" arrival of a certain Queen of Wrestling in 1993.

In the first year especially, WCW took an almost WWF-like approach to the event with a weekend of festivities. Unlike the WWF, who would've showcased these events on television, WCW barely made note of them aside from brief mentions on commentary. Thanks to folks like fan/collector George Mayfield, video records of these happenings do exist. In addition to meet and greets, a dinner was held at CNN Center the night before Slamboree 1993. Fans could mingle with the stars and legends as the card the next night was hyped even further. It should be noted that Sting's mystery opponent (replacing Scott Norton) was announced as Nailz during this dinner. By the time of the match, he was simply referred to as "The Prisoner" for obvious legal reasons. 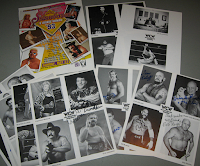 Some cool merchandise came from these early years as well.  An 8x10 photo set was produced for Slamboree 1993. Nine photos featuring thirty-four legends were produced. Interestingly, not every legend featured at the event was included in the photos. On the flip side, first-person accounts indicate that not every star in the photo set was available for autographs. It's a fun set, and even after the passage of over two decades, many of the signatures are still attainable.

In 1994, WCW took a different approach that turned out just as fun. In lieu of photos, a program was produced that ultimately folded out into a large event poster advertising that years matches (including the ill-fated Big Van Vader-Rick Rude main event). The inside also featured bios on the legends, many of which were autographed at the "Slam Meet" event which was also held this year. This turned out to be the last year where a large grouping of legends appeared. By 1995, the last year of the "Legends Reunion" theme, the superstars of the past were limited to those participating in the Hall of Fame ceremony and match. 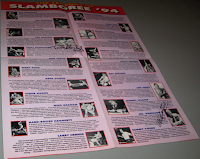 Slamboree was one of the events that I was hoping WWE would eventually adopt, along with The Great American Bash, Starrcade, and War Games. As we know, only one of those came to pass with more unlikely for the future. Still, with old concepts returning to spice up the Network, would a few WCW shows really hurt? Surely something using the Bash name could be a fun summer event. Want to really make NXT fans squeal with delight? How about the first WWE-branded War Games match using NXT stars? Even the original Slamboree concept could be revisited. NXT has been using older talent. Have some up-and-coming stars battle the "new" legends. Dusty is already a force in NXT, it's time to bring some of his past victories full (squared) circle.

I was thrilled to make an appearance on the latest edition of The Bix Show podcast which dropped yesterday. Bix and I discussed lots of wrestling memorabilia, including many items that you've seen here on the blog, so I hope that you will all check it out. You can download it directly at davidbix.com or you can subscribe through iTunes. I hope that you enjoy listening as much as I did participating, and I hope to return to the show in the future!
Posted by J\/\/ at 7:00 PM