Goodbye To The "Fly"

Make no mistake about it, Jimmy "Superfly" Snuka defined wrestling in the early 1980's. Nothing like him had ever been seen before. Sure there had been wrestlers from "the islands" and in-ring competitors who went to the top rope on occasion, but never before had such a package been put together. Looking back, Snuka's run as a top babyface really wasn't all that long on the national scene, but it was enough to make him a household name.

I can honestly say that in the early days of my wrestling fandom, I really didn't appreciate how big of a star Snuka had been. I knew that he had a cool and interesting looking action figure that stood out from the rest, but by this point he didn't win much on television nor did he have many marquee matches. Once I began studying the past via tapes and magazines, I understood just how far the "Superfly Splash" had taken the man from the Fiji Islands.

Years later, I began to see even more of the early days of "The Fly," learning about his runs outside of the WWF in Mid-Atlantic and Georgia Championship Wrestling among other territories. This was a completely different Snuka, playing a much different version of the character that so many children of the '80s grew up on.

And even though Snuka's big run on top was just before the WWF marketing machine went full blast, The Superfly was no stranger to cool action figures, trading cards, and magazine covers. The LJN Snuka figure snuck into the line at the very beginning, but it's the Hasbro version that I owned first, complete with his one hand making the famous "I Love You" sign.

Unfortunately the events of recent years do have to be addressed. Some have chosen not to memorialize the man and that is certainly their decision. In no way should that detract from those of us who do. Many of those who are riding the "social justice" train are the same individuals who will throw out the phrase "Innocent Until Proven Guilty" when it suits their own needs. In a remembrance on my personal Facebook page, I pointed out that there are many individuals from many genres who, with a quick Google search, can be found accused of many heinous acts. Some are still in the public spotlight in a weekly or daily basis, yet their fans will continuously follow and/or worship them until their last breath.

I did not worship Jimmy Snuka or any wrestler/celebrity. I do not know if he was guilty of the accusations presented or not. We will never know. I do know that in my many dealings with him as well as my views of his dealings with others, he was a joy to be around. He brought smiles to people's faces, as well as to my own. If it bothers you to see this here, there's always next Thursday.

I choose to thank Jimmy Snuka for making an impact on the business that I love and for making a "Splash" on millions of fans worldwide. 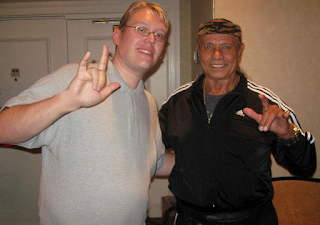