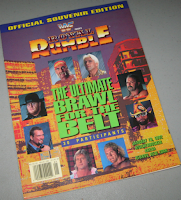 Some call it the greatest Royal Rumble of all-time. In my opinion, they're right. It was a transitional time for the World Wrestling Federation with names who starred in various territories in the '80s finally calling the WWF their home. The biggest non-WWF star of the previous decade, Ric Flair, was among those wrestlers. Even before the event, it seemed obvious that the event was building to a Rumble win for "Naitch." After all, this was the first time when a Rumble win truly had meaning. The winner would become the undisputed WWF Champion. But what would happen after Flair came strolling out at number three? In an hour we would find out...

The program is a product of the time when the pay-per-view event programs featured unique covers and event pages, but also included the pages from the then-current monthly event program. The non-exclusive pages covered stars and angles pertinent to the time period. In this case, the imminent split of The Rockers and the reinstatement of "Macho Man" Randy Savage are among those featured. Great period ads, too. Who could forget all of the "Hulk Hogan Vitamins" jokes? I'd like to, but the ad is something that kids can look up to...and parents can trust. 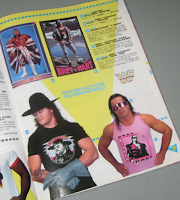 As was standard for the time, the WWF Merchandise Catalog makes an appearance next with the Spring/Summer lineup. Though the days of cameo appearances by Shane and Stephanie McMahon had long since passed (though Shane did referee at the Rumble itself), the catalog is still chock full of fun. I can still remember being extremely amused at the sight of The Undertaker modeling his own t-shirt. It just seemed so out of character and out of place, even in 1992. I also loved gazing at the photo of the mock WWF children's bedroom. I just had to make sure that there were no Hasbro figures shown that I was unaware of. 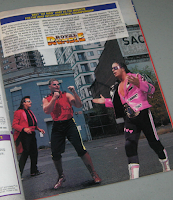 Next up is a feature on the scheduled WWF Intercontinental Championship match between Bret "The Hitman" Hart and The Mountie. In the days leading up to the Rumble, The Mountie took the Intercontinental Title from The Hitman at a house show where Bret was said to be ill. This would lead to Roddy Piper having his first taste of WWF championship gold when he dethroned The Mountie in a brief encounter at the Rumble. Though Hart and The Mountie did not do battle at this Rumble, they did in fact see action against each other two years earlier at the 1989 Royal Rumble in an opening six-man tag match.

The 1992 Rumble was filled out with three tag team matches. The opening tag greatly mirrored that of the previous year, especially in setting a great mood for the evening. 1991 saw The Orient Express battle The Rockers, while this year the Mr. Fuji-led team battled The New Foundation--Owen Hart and Jim Neidhart. The WWF Tag Team Titles were on the line when The Legion of Doom battled The Natural Disasters and finally The Bushwhackers took on The Beverly Brothers. These latter two tag matches did not amount to much. Earthquake and Typhoon would have been much greatly utilized as two more gargantuan threats in the Rumble match.

It's now been twenty-five years since the "best" Royal Rumble. The event not only featured the best-remembered Rumble match, but also the best commentary performance by the beloved team of Gorilla Monsoon and Bobby "The Brain" Heenan. The Rumble included arguably twenty men who were bona fide main eventers in the business and saw the "60 Minute Man" reign supreme in the WWF's most famous "60 Minute Match." With a tear in my eye, Royal Rumble '92 just won't ever be topped.