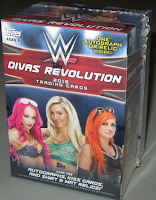 Is it the "Divas Revolution" or "Women's Revolution?" Either way, the ladies are back with their own trading card collection thanks to Topps. Though I'd definitely consider this a new line for a new year, these cards actually started hitting shelves late last year. The set was initially thought to be a Wal Mart exclusive, but the blaster boxes have also been spotted at Toys "R" Us. Speaking of which, if you aren't a fan of blaster boxes you're out of luck. Thus far the 51-card boxes are the only way to get these cards at retail and it seems as if it will remain that way. 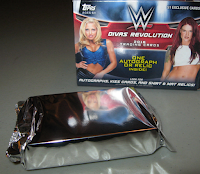 Opening a box will yield you a mix of fifty cards from the base and subsets as well as one relic or autograph. The cards are wrapped all together in one foil wrapper and, to be honest, look like a Chunky bar. You know..."what a chunk of chocolate!" But inside isn't candy of that sort. Instead it's Topps first set solely devoted to the female WWE superstars. Fleer did several "Divas" sets over a decade ago, but those focused only on the then-current females. Although there were some diamonds in the rough then, the stars were more for show than athleticism back then. 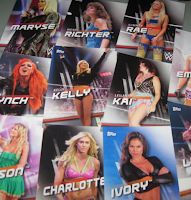 The base set contains the odd number of 43 cards. Perhaps Topps was looking to secure more names from the past? We see new WWE cards for Wendi Richter, Torrie Wilson, Ivory, and Kelly Kelly among others, but I must admit that I'm biased as far as my favorite. For the first time since 1986 there is a new WWE-licensed product of my friend Leilani Kai. The picture used is exactly the same as one of her cards from thirty years ago in the WWF O-Pee-Chee set, but it's still a cool thing to see. 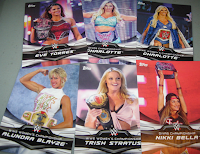 There are also numerous subsets that largely mirror those in the regular Topps WWE subsets. Power Couples, Rivalries, and Champions are just several featured. It's never a bad thing when Miss Elizabeth and Sensational Sherri show up. I particularly like the Champions cards, showing the stars with the various incarnations of the title. Charlotte receives two cards in this subset, one featuring the Divas Championship and the other showing the current WWE Women's Championship. It's interesting that this set was still in development when the "Divas" tag was dropped, yet the term is still used as the title. 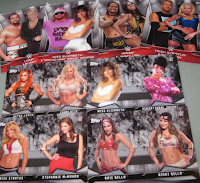 What we have in Divas Revolution is a unique set that almost feels like a test. If the blaster boxes sell well this time around, will we see a wide-release sequel with packs and hobby boxes? There are enough female stars of the past and present to warrant it. Is the demand there? I would think so. No WWE trading card product, no matter how repetitive, ever seems to hang around long. If you see a blaster of Divas, pick it up and show your support! Even if you suffer, I mean, "luck out" and pull a mat relic, you'll get fifty other cards from a unique set filled with some great talent.
Posted by J\/\/ at 7:00 PM