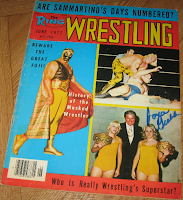 Forty years. It's a long time no matter how you look at it. The endless video screens, blinding lights, and over-rehearsed antics of today's sports entertainment were nowhere in sight. All you had was a ring, a spotlight, maybe a curtain, and a lot of rough men and women. Was it a better time? Who's to say? Was it a great time? We have so much proof in that direction that even a fan like myself, who was still a few years away from being born, can see that. Some of that proof is in the great old magazines of the era that we so often feature. This week, it's a look at the highlights of Ring Wrestling's June 1977 issue.

The cover is a time capsule all on its own. You've got Superstar Billy Graham grappling with Bruno Sammartino. Mil Mascaras is present in one of his classic outfits. We also have Women's Tag Team Champions Vicki Williams and Joyce Grable. Joining the blonde duo is none other than Vincent J. McMahon. Yes, the famous "Vince Sr." He didn't appear on the cover of any publication too often, but here he is.

At the time of publication, Ring Wrestling was still an offshoot of "The Ring," the legendary boxing title that at one point covered wrestling as well. It was a little more serious than the Weston wrestling magazines, and also seemed to cover a wider range of the wrestling world. Legendary photographer George Napolitano was a contributing editor of the magazine. One of the cover stories, "Are Bruno Sammartino's Days Numbered?" was penned by him. I'd venture to guess that the rogues gallery of Sammartino opponents featured were photographed by Napolitano as well.

A solid feature on the history of masked wrestlers is followed by a story and pictorial chronicling the rivalry between the teams of Williams and Grable and Toni Rose and Donna Christianello. If you think the women's wrestling revolution began a few years ago, think again! These four were tearing up rings for years. I've often said that Christianello did The Fabulous Moolah's shtick better than Moolah herself. Donna also did a lot of the training at Moolah's school. Grable, despite recent health battles, still appears at many wrestling-related events while Rose enjoys retirement. Williams has long been said to have distanced herself from the industry, while Christanello sadly passed away in 2011.

Articles featuring Giant Baba, a young Randy Alls (later Randy Rose of the Midnight Express), international female stars, Nikolai Volkoff, and Harley Race are also included. Smaller points of interest are covered in "On And Around The Mat World." The Cauliflower Alley Club, which just held its annual reunion in Las Vegas, is mentioned here as a club that meets once at week and is helmed by names such as founder Mike Mazurki, Count Billy Varga, and Mildred Burke. There's also information on the Wrestling Fans International Convention (stories of which still need to be gathered in book form), and great accompanying photos of Baba, Mascaras, and "The Fabulous" Jackie Fargo. The latter is a man who sadly never seemed to get enough press in other magazines, despite his star power.

In addition to letters and the ubiquitous ratings section (featuring a full twenty men, twenty women, and twenty tag teams rated), we get two pin-ups. These aren't color or slick. These are pin-ups right on the same paper as the rest of the magazine. First up, for the ladies, we have the High Flyers themselves, Jim Brunzell and Greg Gagne. A highly underrated team, many will remember them immortalized in the Remco AWA action figure line together before Brunzell became a "Bee" and Gagne became a "Raider." For the men we have the stunning blonde Lorraine Johnson. If the face looks familiar, you may have seen her daughter once or twice about a decade later when Baby Doll took up with the likes of Tully Blanchard and Dusty Rhodes.

And how about The Great Fuji? Yep, it's the man who later became known simply as "Mr. Fuji." At the time, it seems that the devious one was wreaking havoc on Ray Stevens and Pat Patterson in San Francisco. It's striking to see how similar he looked nearly two decades later when he once again sported a shaved head. Ivan Koloff, Larry Zbyszko, and Susan Green get some good press following Fuji, and we run into yet another staple of the '70s--fan clubs. Wrestling historian Tom Burke breaks down exactly which clubs we can join and how, run by names like Mick Karch, Mickie Henson, and Ken Jugan who would all go on to be in the business themselves.

I hope that over the years you've loved peering into these printed windows of the past as much as I do. There are plenty more to come, as there are no shortage of classic (and not so classic) wrestling publications to explore. I only go through the highlights, but I know I miss hidden gems now and then. If you really want to explore these things, hop over to eBay. Many really aren't much more expensive than they originally were decades ago. And you can't put a price on a memory...