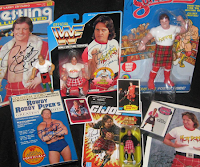 The last time that Rowdy Roddy Piper was profiled at length in this blog was around the time of his passing. It was quite the sad time, as we had just lost Dusty Rhodes as well. Neither man is one who should be mourned long. It doesn't fit into the character of either man. Both brought countless joy to millions of people worldwide. In the case of Hot Rod, my friends and I highly rank him as one of the nicest wrestlers to meet. He may even top that list, and will likely never be replaced. Piper had a way of making any fan feel like an old friend. He was special. 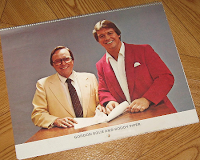 Roddy Piper was at his peak of popularity (both "good" and "bad") just when the WWF marketing machine was taking off. Many remember his likeness showing up on everything from lunch boxes to trading cards, but that wasn't where the "Rowdy" memorabilia began. In addition to magazine and program covers, Piper's mug showed up on the cover of the 1983 Georgia Championship Wrestling calendar. Pictured with his broadcast colleague Gordon Solie. The feisty villain had just recently turned "good" by saving Solie from an attack by Don Muraco. 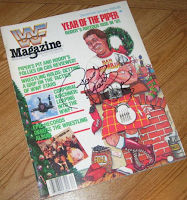 Just a few years later, Piper was making headlines on the cover of the then-fairly new official World Wrestling Federation Magazine. Though he would share the spotlight a few times in those early years with the likes of Captain Lou Albano, Cyndi Lauper, and even fellow villains Nikolai Volkoff and The Iron Sheik, my favorite "cover" moment arrived on the December 1985/January 1986 issue. An artists rendering depicts the "Hot Rod" celebrating Christmas the "Rowdy Way," complete with "Bah Humbug" t-shirt. "Ebenezer Piper," anyone? 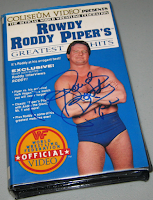 And no one deserved their own dedicated Coliseum Video title more than the rowdy Scotsman. "Rowdy Roddy Piper's Greatest Hits" delivered exactly what it advertised. There were highlights from classic Piper's Pit segments, overviews of his biggest feuds, and of course matches. One of the most memorable moments on the video is when Rowdy Roddy Piper interviews...Rowdy Roddy Piper. It's "Hot Rod" at his heelish best. On a personal note, this was the final item that I ever had Roddy autograph. 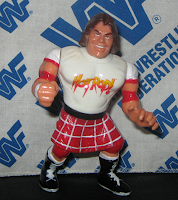 How about action figures? There have been a load. Everyone remembers the classic LJN Wrestling Superstar figure with the cloth kilt. There are some figures such as the Winston Rock N' Wrestling eraser and the convention exclusive G.I. Joe that are stuff of collecting legend. There's even what is likely the newest figure, a Funko Mystery Mini that truly captures Roddy's spirit in its likeness. But my personal favorite may be the one that I played with the most as a child, his entry into the Hasbro WWF line. Something about it was just fun to play with, even if the figure didn't represent Roddy in his wrestling gear. Maybe it's the maniacal facial expression or the great detail on the clothing that still makes it stand out to me. 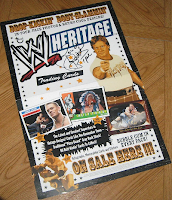 This is just a small sampling of "Hot Rod's" lasting legacy of items. You may prefer something related to his movie career or his oft-forgotten venture into music with the "I'm Your Man" release. It's all here for us to cherish forever. There's even a new book written by two of Piper's children. Although I have yet to check it out, I'm sure that it will only add more great tales and stories to the already lengthy Piper legend. And will we see more Rowdy Roddy Piper figures in the future? To quote the man himself, "You damn betcha, man!" As long as the bagpipes play on, Roddy Piper lives...