As great as the other publications were, there was something special when you picked up an issue of the official WWF Magazine. It was glossy, all color, and all slick. The photos of WWF superstars and events were second-to-none since, for the majority of the magazine's heyday, outside photographers were banned from ringside. It combined all the "news" that was fit to print along with the legendary merchandise catalog and packaged it together in one nicely disguised additional piece of marketing. The superstars, the managers, the announcers, and even the ladies--they all made it into the magazine. While it may be gone today (aside from the occasional "special"), the decades of existing issues continue to stand the test of time.

In this edition of MarketWatch, we'll look at some of the recent auction sale prices of WWF Magazine. Instead of showcasing the milestone issues that have been largely covered here in the past, we'll focus on some of the less-remembered covers. As is usually the case, even if an autographed example is shown, the prices given are reflecting unsigned pieces. 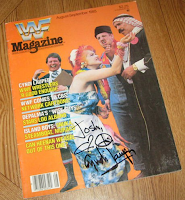 *We kick it off with an issue from when the magazine was still bi-monthly. It was August/September 1985 and the "Rock N Wrestling Connection" was still in full force. Who was at the center of that era? Cyndi Lauper, of course. Who were three of the biggest baddies? Rowdy Roddy Piper, The Iron Sheik, and Nikolai Volkoff. All four of these WWE Legends (I would say Hall of Famers, but Lauper continues to be inexplicably snubbed) create a cover image that is pure '80s WWF. As discussed on this blog years ago, the keen reader will spot a photo inside of the issue of Fred Blassie that is more than obviously the inspiration for his LJN Wrestling Superstars figure. This issue recently sold at auction for $30. 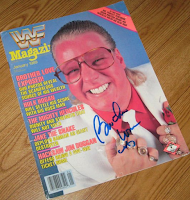 *Still deep in the cartoony land of late '80s WWF brings us to the January 1989 issue. On the cover is none other than "that piece of garbage" (per Gorilla Monsoon), Brother Love. This was less than a year after the character debuted. If you've been watching the recent WWE Network additions of Prime Time Wrestling, you know that he was still a big deal from week to week, advancing many storylines on "The Brother Love Show." Decades later in WWE Magazine it was mentioned that this was one of the lowest-selling issues of all-time, but that could have been just a made-up blurb. Nonetheless, the issue featuring the man who "loooooooves" you recently sold for $20. 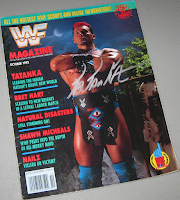 *October 1992 brings us one of the more underrated stars of the mid-90s (in my opinion, anyway), Tatanka. The Native American superstar may have come along just a few years too late, but I will always fondly remember his battles with Shawn Michaels, Bam Bam Bigelow, and IRS among others. He made an amazing cover shot, too, in his only official WWF Magazine cover appearance. Tatanka still actively competes on the independent scene to this day, and is one of the nicest superstars that you'd ever want to meet. He is very active with fans via social media, as well. This underrated issue just recently sold for $13. 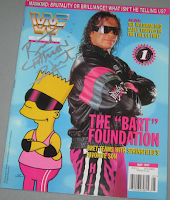 *His voice may have sounded completely different, but Bret "The Hitman" Hart did in fact guest star on The Simpsons back in 1997. To promote the episode, he also shared the cover of WWF Magazine with Bart Simpson in May of that year. It's a bright, vibrant cover that would be very much out of place in the very-soon-to-be "Attitude"-filled world of the WWF just several months later. Why did Bret use a generic wrestler voice? As the story goes, he was originally to voice a fictional wrestler. When the produces of The Simpsons saw the fans go nuts for the star when he arrived for his recording, the decision was made to instead animate "The Hitman" himself. The issue recently sold at prices ranging from $10 to $25. 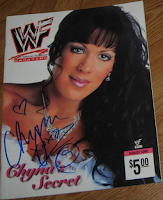 *She may be gone way too soon, but her groundbreaking legacy lives on. Chyna may have done some things to tarnish that legacy in her later career, but for around four years she was certainly an attraction unlike anything that the wrestling world had seen before. In my meetings with her, she was nothing but gracious. My copy of this issue is autographed, as it was always one of the main items that I wanted her to sign. I'm glad that it got to happen. The August 2000 issue of WWF Magazine, featuring the "9th Wonder of the World" in one of her most beautiful shots, recently sold for just $8.00.

Five issues is a tiny sampling, but many of the prices prove that the magazine is still very undervalued monetarily. As with so much wrestling memorabilia, prices will go up and down as time marches on. What's important, as always, is the value to you, the fan. Maybe you grabbed that Brother Love issue off of the newsstand in '89 or you couldn't believe that Bart was standing with Bret in '97. Memories are the true treasure that you can't put a price on.
Posted by J\/\/ at 7:00 PM