I can't exactly take credit for it, but I did predict it. Last September I "created" what I thought what be a perfect 2017 edition of Topps WWE Heritage trading cards. Based upon the 1987 Topps WWF trading card design, the cards celebrated thirty years of the set which featured WrestleMania III. And...I was half right. To be fair, it was a no-brainer. Millions of kids collected that set growing up in the Hogan era, so it's only natural that the design would be revisited. Again, as you'll see in the coming paragraphs and photos, I was only half right.

For the third year in a row, Topps WWE Heritage cards have arrived in full force. Hitting in early August 2017, the box and packs once again adopt blue as the primary color. Goldberg, John Cena, Bayley, and AJ Styles take the top of the box, although I'm partial to the side which features Ric Flair, The Ultimate Warrior, Randy Savage, and "surfer" Sting. A hobby box promises 24 packs, 9 cards per pack, and 2 hits per box, including a guaranteed autograph.

Getting the hits out of the way, it seems as if you could almost consider yourself as receiving three. From my own experience as well as others, each box seems to contain one silver parallel card numbered up to 25. While not guaranteed on the box, this is definitely a bonus and a third hit in the eyes of many. My box yielded a silver Kevin Nash parallel along with a Johnny Gargano shirt relic and, most importantly, a Kevin Owens autograph. It's nice to see that the autographs are once again "on-card" here, meaning that the actual card was signed rather than a sticker being applied. 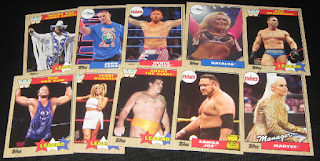 The 100-card base set is a throwback to the 1987 Topps baseball card design. We've seen this style used on WWE Heritage before as a subset, but never as a full set itself. The common bronze parallels are a bit darker. The base set is once again a good mix of WWE and NXT superstars as well as legends. I wouldn't say that there are any true surprises, but this would be the Heritage debuts for Ken Shamrock and Terri Runnels, not to mention the return of Fit Finlay after a long absence. 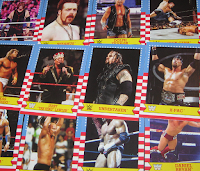 My being "half right" with my blog entry from last year comes in the form of subsets. "SummerSlam All-Stars," "Thirty Years of SummerSlam," and "Bizarre SummerSlam Matches" all feature the 1987 Topps WWF card design that I had used in my imaginary set. It makes perfect sense, but I would rather have had the base set featured in this design. Even the "Kiss" and "Patch" hit cards get in on the act by reflecting the 1987 "TV card" and sticker designs, respectively. "SummerSlam All-Stars" is the best of the bunch, taking after the first 21 cards of the set from thirty years ago.

If I had a major complaint about the set, it would be that the photo choices seem a bit off in some instances. Some of the photos, especially in the subsets, don't seem up to the usual Topps quality. Others, such as Goldberg's base card, were all-in-all odd picks to begin with. "The Man" is almost completely facing the opposite direction. And what is with all of the X-Pac love in this set? Does he really warrant that many cards? I will also mention the fact that non-Heritage "tribute" subsets (here specifically for Cena, The Undertaker, and Daniel Bryan) continue to trickle into Heritage sets. These cards just do not fit in with Heritage and should be kept for the various other sets released throughout the year.

Bitterness from my idea being stolen aside (I kid...), I like the set. There could have been some better photo choices and I wish that the 1987 WWF style had completely saturated the release, but a hobby box is still a worthwhile purchase. These remain my favorite cards to be autographed due to the non-gloss style, and I don't see that changing anytime soon. It would be nice to see some more studio shots included in a Heritage set similar to the first two releases over a decade ago. In fact, I wouldn't mind seeing WWE Heritage II revisited.