Maybe this list should've been saved for Halloween! Who else loved the bloody wrestling magazine covers of yesteryear? I can't imagine many saying that they didn't. These covers are almost a foreign concept in a world where wrestling matches are stopped when a drop of blood comes trickling out. It's a different time, and not necessarily a better one. Thankfully, we have these artifacts to look back on, showcasing the gory, wild west world of vintage professional wrestling. 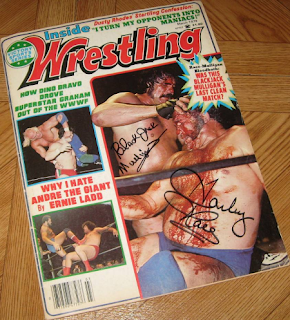 The stars of the '70s were wild in and out of the ring. Two of the most notorious were Harley Race, who could fill a bloody cover story all by himself, and the late Blackjack Mulligan. In March 1979, the two were seen in a gruesome bloodbath on the cover of Inside Wrestling. Mulligan's infamous clawhold seems to be actually causing the blood to squirt from the head of Race... 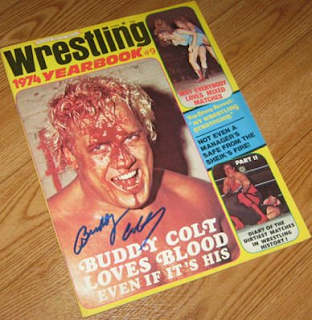 Speaking of wild, how about Buddy Colt? This top talent in such areas as Florida and Georgia may not be a common name to today's fans, but students of the past are more than familiar with the grappler. In fact, it's the very photo used on the cover of a 1974 Wrestling Yearbook issue that shows up time and again when Colt comes into the conversation. The caption? "Buddy Colt Loves Blood - Even If It's His." Well then... 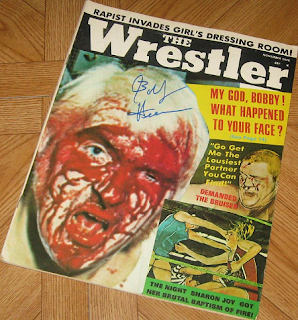 Speaking of loving their own blood, you get a feeling that "The Brain" may have been the same way. There are tons of magazine covers featuring Bobby Heenan's mug covered in a "crimson mask," but none are more iconic than the November 1970 issue of The Wrestler. The magazine had it's own feature on this blog at one point, and Heenan still lights up when he sees this particular cover. 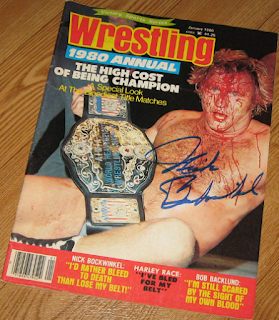 One of Heenan's most connected protege's also shed blood on occasion, that being Nick Bockwinkel. On a 1980 Wrestling Annual magazine, the erudite champion is seen on the cover after a brutal AWA Championship defense. His famous belt barely held up, the dazed Bockwinkel likely just had the fight of his life. 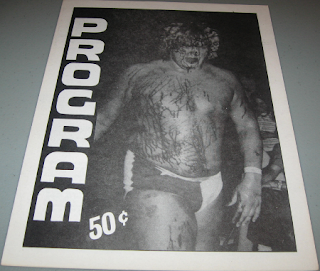 Of course, bloody covers can come in the form of programs, too. Each territory had their programs, but few may have been cooler than those from Memphis. The September 26, 1979 program cover features a very young Terry "Bam Bam" Gordy covered in a mass of blood. The photo may be black and white, but that does not stop the intensity of the moment from coming through.

A small sampling? Yes, but some of the best. The blood is often missed from today's product, but looking at these images certainly keeps the gruesome past alive. Bloody Hell!
Posted by J\/\/ at 7:00 PM