No one can argue that Jakks WWE Classic Superstars line changed the wrestling memorabilia world forever. From turning fans who otherwise had never purchased a toy into collectors to bringing new autograph signing bookings to stars simply because they now had a "Classic," the impact of the line will be felt for years to come.

After the announcements that Mattel would be producing WWE figures and Jakks doing likewise for TNA, many collectors wondered just what would happen to the Classic Superstars. Sadly, due to a barrage of cancelled figures, the line went out with a whimper. The last series of figures was barely released beyond online retailers.

own way. I've already reviewed several of the Mattel WWE Legends figures. Now, Jakks returns to the vintage ring with Legends of the Ring.

Included in the first series is Sting, Hulk Hogan, Jeff Jarrett, Kurt Angle, and Kevin Nash. Scott Steiner was scheduled to be the sixth figure, but did not make it past the prototype stage. Many are still hoping to see this figure produced down the line, as it would've made an excellent companion to the Classic Superstars Rick Steiner figure.

Each figure represents the star in attire from earlier in their career. While Hogan, Sting, and Jarrett are all from very early in their careers, Angle and Nash simply appear as they did just a few years ago in TNA.

It should be noted that aside from the Nash figure, there is no mention of TNA on the front of the packaging. Instead, the Sting and Jarrett figures feature the NWA logo and the Hogan and Angle figures feature the New Japan Pro Wrestling Logo. The inclusion of these logos mark the first time New Japan figures have been marketed in the United States on a mainstream level and only the second time that the NWA logo has appeared on action figure packaging. (To see the oft-forgotten first time, please refer to this earlier entry.)

Although there is plenty of TNA saturation on the back of the packaging, I enjoy the fact that the line is officially only "Legends of the Ring." It would've been a cool touch had the WWE Classic Superstars line had alternate logos such as WCW or ECW on their packaging.

The packaging design itself is attractive as well. I'm not entirely sure if it's the design of the figures, packaging, or price point ($11.99 each at Toys "R" Us), but I don't feel as if I'm paying for the packaging as I've felt with the Mattel Legends line at a whopping $14.99 each. While it may not be quite as regal as the Classic Superstars packaging, there aren't any annoying "star points" just waiting to be bent, either.

The only downside to the packaging is the use of real photos of the stars on the right side similar to several figures in the first Classic Superstars series. The photos used are current, therefore not matching four of the five figures in the line. 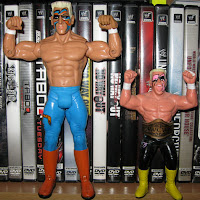 The figure designs speak for themselves. If you're familiar with the Classic Superstars or any of the Jakks "Ruthless Aggression" style figures for nearly the past decade, then there will be no surprises here.

I've been outspoken about how I feel the Mattel figures are rather slim and stiff. Wrestling is a larger than life business, therefore any merchandise should be representative of that. Jakks fills these need.

Without a doubt, the most popular figure from this line will be Sting. This is the first figure of the classic "surfer" Sting look in exactly ten years. This is also the only one announced thus far. Sting was a highly requested figure in the Classic Superstars line that was unable to be produced for a variety of reasons. The Stinger is here in all of his colorful pre-nWo glory. 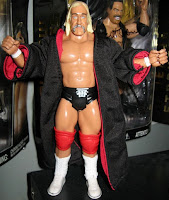 Only produced once before in action figure form (in the early 1980s Popy line from Japan), Hulk Hogan in the outfit he wore in New Japan Pro Wrestling will most likely be the second most popular. Clad in a black robe, the only accessory in this series, the figure is one of the most striking representations of The Hulkster to come along in some time. Tan from head to boots, the incredible face sculpt is actually borrowed from Jakks Rocky action figure line from a few years ago. Considering that Hogan portrayed Thunderlips in Rocky III around the time he was appearing in Japan, the choice was a no-brainer.

The other three figures will have their individual fans but will not be as sought after as Sting and Hogan. While Nash sports the short-haired look from early in his TNA run, Angle is not very different from his final Jakks WWE figures.

Jeff Jarrett is arguably the most controversial figure of the line. While many have complained that the figure is plain and boring, I feel that it is a perfect representation from early in Jarrett's career. The figure would look great flanking either of the Jerry Lawler Classic Superstars figures for a taste of great vintage Memphis wrestling. I will add that I would not mind seeing as much of a "Double J" Jeff Jarrett figure that could be produced while still avoiding trouble with trademarks.

Longtime readers can easily predict my verdict here--I love these. While I'd love to see more varied characters, the line is off to a great start. The second series, slated for release late this year, includes Jeff Hardy, Samoa Joe, AJ Styles, Andre the Giant, Jim Cornette, and the very first figure of Terry Taylor. While Hardy, Joe, and Styles, clad in their early TNA attires, will be popular with new fans, Taylor and Cornette are the ones you'll most likely see reviewed in these pages first. The Rooster returns to the barnyard!