Nothing like a punny title to start off an entry. It is based off of fact, however.

It's been almost a year since a true, serious, card set has been released for the WWE. With the current direction of the product, it's also completely understandable. Collectible dog tags, poker-style chips, and "Rumble Packs" largely looking like a card version of the WWE Kidz Magazine have dominated the store shelves. Kids who are enthralled with the ring wars of Cena, Orton, and The Miz, among others, have been buying these items up like hot cakes. Adult collectors, looking for everything that serious card collectors look for, haven't had much to look for.

That is, until now. 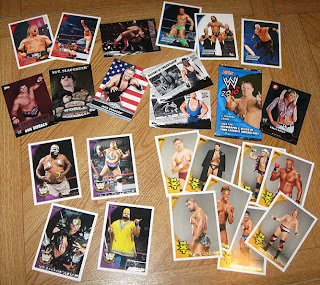 Within the past month, Topps WWE 2010 cards have hit stores. Featuring 110 cards in the basic set, 6 subsets, 2 autograph subsets, 2 swatch subsets, and 1 autograph/swatch subset, any enthusiasm lost in the other 2010 releases should quickly rebound. 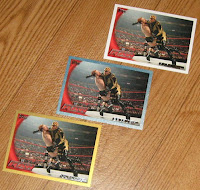 The unique subsets combine superstars from all facets of WWE including past and present stars and divas. Sets titled "World Championship Material," "National Heroes," and "History of" mix stars such as The Undertaker, Nikolai Volkoff, and Chris Jericho among many others, providing glimpses into title reigns, home counties, and the careers of these stars.

Autograph and event-used item collectors should be equally appeased, as several combinations of each are seeded into the set. Both single and dual-signed cards are included, with the dual autographs featuring some stars known for teaming and others known for heated in-ring rivalries. 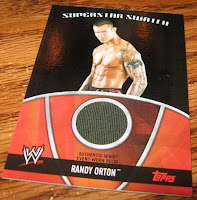 Also up for grabs are "Superstar Signature Swatch" cards, which seem to be included via redemption card insertion. Included in this set is "The Game" himself, Triple H, who has not been included in an autograph subset in many years.

For those of you like me, it's the basic cards which are the most fun to collect. Simple, basic, shots of all of your favorites. While the WWE Legends cards, the final 32 cards in the basic set, includes an amazing array of the best of WWE's past, it's the inclusion of the original 8 NXT Rookies that had me truly pleased. Great studio shots cropped with the NXT logo and a yellow sidebar make these cards a fun extra.

For those collectors who like to get the cards signed themselves, photo-wise this is a great set.

One drawback is the high gloss on all cards aside from the "ToppsTown" subset. While the gloss has become somewhat of an industry standard, it was nice to have the four WWE Heritage sets for ease of autograph purposes.

All in the all, the set is beautiful and well produced. New ideas for subsets are always welcome, and many show up here. With the parallels, autographs, and swatches, there's truly something for everyone.

Each pack contains 7 cards. I have yet to open a pack that did not include at least a blue parallel card. Blaster Boxes, 10 packs and an additional relic card featuring a piece of the mat from the 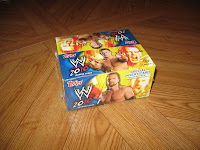 2010 Elimination Chamber pay-per-view, are available at most retailers. Hobby boxes featuring 24 packs are available at many card shops. The hobby box that I opened included one swatch card and one autograph card.